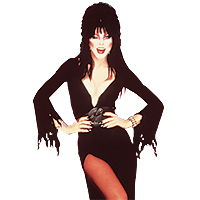 Lifestyles of the Rich and Famous!

“Lifestyles of the Rich and Famous ran for 11 years. This show wasn’t about keeping up with the Joneses. This was beating the Rocke-fellers and the Vanderbilts. The Sultan of Brunei was so rich that when he bought the Beverly Hills Hotel, he didn’t fly in for the opening. He had television cameras placed everywhere for his own private satellite feed from the celebrity red carpet, the ballrooms, and the pool. Ah, the days of wine and roses. Never likely to see that fabulous fun ever again.” –Robin Leach, host, Lifestyles of the Rich and Famous “Local TV had no standards back then. When I presented my costume to the station manager at KHJ, he said, ‘Can you make the slit on the leg a little higher?’ My friend Robert Redding was an artist and part-time drag queen; he sewed the dress, he cut the wig, he did my makeup. I have to give him props. He made it edgier.” –Cassandra “Elvira” Peterson, television personality “The Dr. Demento Show was everywhere. I began getting unsolicited tapes from listeners, including one from Alfred Yankovic of Lynwood. I listened and knew right away that he had unusual talent. ‘Another One Rides the Bus’ was recorded live on my KMET show in 1980. ‘Weird Al’ Yankovic’s first album and video would come out in 1983.” –Dr. Demento, host, The Dr. Demento Show “Tom Selleck once passed by my billboard in a limo and made his driver take him around five times to get the number. He called and invited me to Hawaii.” –Angelyne, model and L.A. icon