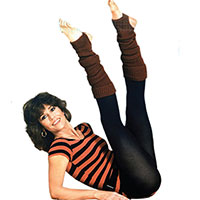 THE MOVE: To recover from an injury, Fonda developed her own style of aerobic exercise, which she outlined in a book and then in an instructional video that was distributed by Karl Home Video in 1982. In the first tape, Jane Fonda’s Workout, she introduced the phrase “feel the burn.” That sadomasochistic mantra helped kick off America’s complicated obsession with fitness.

THE RESULT: In the 1990s, chiseled celebrity copycats Cher, Fabio, and Mark Wahlberg power-stepped onto the exercise video bandwagon, and by the 2000s, watching people sweat on TV became a favorite form of entertainment. Jillian Michaels, the punishing trainer on the reality series The Biggest Loser, has referred to Fonda as her idol. “Feel the fear” is her spin on Fonda’s famous catchphrase. THE MOVE:  Fonda wore ballet-inspired clothes (skipping the shoes) for the taping of her first video. Soon young women began donning leotards and leg warmers as sporty streetwear. In 1984, Fonda started a clothing line, but the venture failed (the clothes were too pricey, noted Patricia Bosworth in her biography of Fonda).

THE RESULT: Five years after Fonda attempted her clothing company,
Canadian Dov Charney started American Apparel out of his college dorm
room in Boston. In 1997, Charney moved the operation to Los Angeles, selling locally made, body-conscious clothing with an ’80s bent; photographer Terry Richardson captured the sexually charged look. The company is currently worth $350 million. THE MOVE: The videocassette recorder entered the market in the late ’70s, but the 1982 release of Jane Fonda’s Workout drove the home entertainment revolution. In 1985, 11 million VCRs were purchased in the United States, at a rate of 30,000 recorders per day. Ultimately 17 million copies of Fonda’s videos were sold worldwide.

THE RESULT: As VCRs became a must-have household item, movie studios began making their films available on VHS. The rental market boomed, including the opening of the first Blockbuster in Dallas during the mid-’80s. Silicon Valley executive Reed Hastings cocreated the subscription service Netflix in 1997 after being hit with a $40 late fee at a local video store. Netflix is now a $21 billion company whose production arm is behind the hit show House of Cards (with Robin Wright). A Netflix series starring Fonda is in the works for 2015. THE MOVE: Fonda was 45 when she recorded her first workout video, though her legs didn’t look a day over 18. In a 1990 interview with The Washington Post, she said, “It’s not about how you look—it’s how you feel. I can do more with ease and grace now at 52 than I could when I was 20.”

THE RESULT: Actresses like Rene Russo and Helen Mirren have continued to amp up the sex appeal of “mature” women. In 2006, rapper Mickey Avalon’s song “Jane Fonda” gave her signature workout a suggestive twist, and “Jane Fonda” was soon added to the online Urban Dictionary as a naughty euphemism you won’t find in Webster’s. In 2010, Fonda launched a YouTube lifestyle channel for women over 60, but she apparently still feels youthful enough to publish a self-help book for teens. Looks like 70 is the new 17.