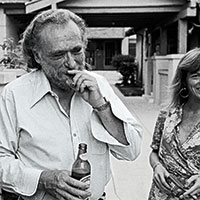 The poet laureate of L.A.’s underbelly, Bukowski led a hardscrabble life that took him from South L.A. to East Hollywood to San Pedro. He began writing in the 1940s, but his novels, short stories, and poems were rediscovered, in large part owing to the California imprint Black Sparrow Press and the 1987 film Barfly. A New York Artist Mapped the Best Places to Read a Book in L.A.