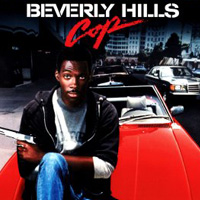 Remember when Eddie Murphy was the “shrewdest, hippest, fastest-talking underdog in a rich man’s world”? Fans of Beverly Hills Cop do. The highest grossing movie of 1984 and the most iconic buddy-cop-action movie of that decade has already spawned two sequels, and another one is in the works.

Yes, Axel Foley will return to screens in Beverly Hills Cop 4, although he’ll be moving to Detroit “during the coldest winter on record to navigate the new rules and old enemies in one of America’s most tenacious cities.” But at least the movie won’t include Bronson Pinchot wielding a microwave-machine gun (see Beverly Hills Cop III; on second thought, don’t).

Before then, you can catch Murphy in the original Beverly Hills Cop, which will be screened on Tuesday, July 22 as part of Los Angeles magazine’s 1980s-themed film series at Arclight Hollywood. Directed by Martin Brest and co-starring Judge Reinhold, the comedy reminds us of a bunch of things we love about the ‘80s: electronic theme music, Michael Jackson references, old cars. Not to mention the fact that this film catapulted Murphy to stardom.