Home Uncategorized 1984 Didn’t End the World After All 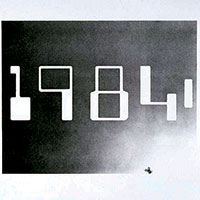 When I drew 1984—in 1967—I was thinking about the book and the talk at the time that Big Brother was watching you. I put that together with these new funny numerals on my check stubs, and I wondered why they had invented this new vocabulary of numbers. I thought we may never reach that number on our calendar because we might hit some Armageddon. I always liked the idea that it was a few years before its time that I had made this statement in this work. Beyond that, it was fun to make.

When 1984 did arrive, I remember the Olympics were here, and we all went to a spa in Montana to get away because we thought the city was going to explode with traffic. The exact opposite happened—there was nothing. The freeways were empty, and no one could figure out why. Either people didn’t show up, or they stayed put.