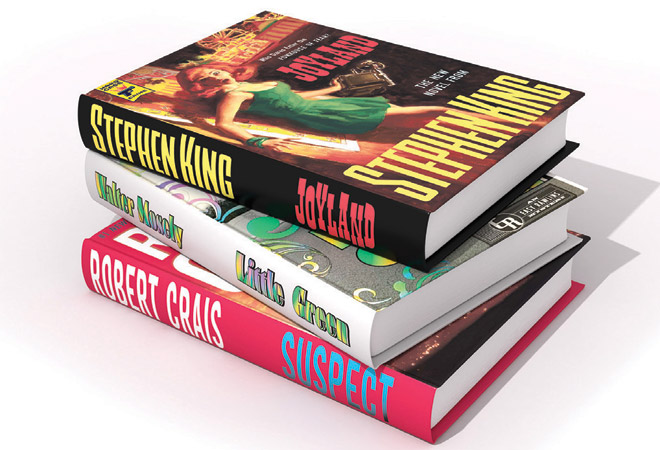 Suspect
By Robert Crais
Maggie the German shepherd arrives at an LAPD K-9 unit with a whopping case of PTSD after a brush with death in Afghanistan. Her handler, officer Scott James, isn’t doing so well, either. He’s lost some of his health in a brutal attack. As Scott and Maggie hunt for the shooters and restore each other’s wellbeing, the reader comes away with a profound respect for a dog’s sensory powers. > G.P. Putnam’s Sons, 309 pages.

Little Green
By Walter Mosley
It’s the 1960s, and Easy Rawlins is seeing cracks in the curtain that’s long separated white and black Los Angeles. In his search for a missing son of Mid City, he’s welcomed with open arms by the flower children of the Sunset Strip. He also gets a boost from the potions of a local witch doctor as he recuperates from the crash that almost killed him in 2007’s Blonde Faith.  > Doubleday, 304 pages.

Joyland
By Stephen King
The master of terror pens a classic whodunit with a dash of Hardy Boys. Devin Jones is earning cash for college at an old-style amusement park in North Carolina. Surrounded by lovable characters, he falls for the carny life and stays on through the off-season. It also gives him time to indulge another fascination: Just who was it that murdered the ghostly girl in the Horror House? > Hard Case Crime, 286 pages.