Home Outdoors On A Clear Day 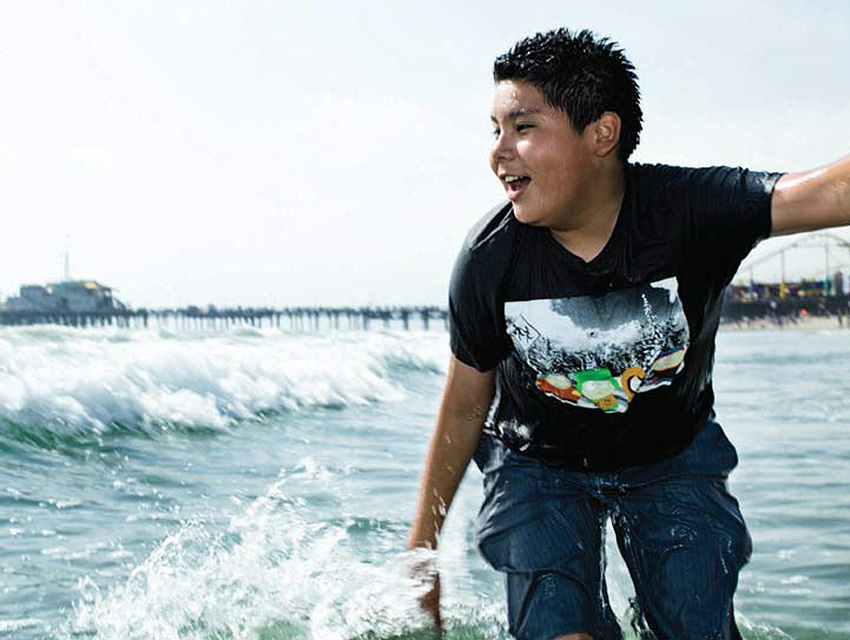 Cloudless, balmy with a gentle breeze, it’s perfect beach weather—even on skid row. On this Saturday morning Luis Carillo and his mother, Elvia, await their ride. This is the first time she’s ever taken him to the Pacific Ocean. Until a year ago the 12-year-old had lived with his grandparents a block below the rescue missions, where homeless men and women splay on the sidewalk with their bundles, shopping carts, and broken tents. Now mother and son share a single unit just on the other side of the 110 freeway. Luis returns to the neighborhood daily to visit his grandparents and attend sixth grade at a charter school run by Para Los Niños, a nonprofit social welfare agency for the children of L.A.’s most neglected neighborhoods.

He hasn’t gone on one of the field trips that have belatedly introduced so many classmates to the surf, but he’s seen the beach on DVD—in The Pirates of the Caribbean movies and in the horror flick The Fog, whose ghastly details Luis enthusiastically shares once we’re in the car. He doesn’t own a bathing suit. For his plunge he’s dressed in pinstriped polyester shorts and a T-shirt festooned with South Park characters. He intends to be in the ocean all day. “I never want to get out,” he warns, fixing knitted brows and chestnut eyes on Elvia. “Luis doesn’t know how to swim,” Elvia says with a smile. “I do know how to swim,” Luis says. “A little.”

Twenty minutes later he’s stepping onto the beach at Santa Monica. He’s reluctant to take off his sneakers; he’s heard the sand can be scorching. Every ten seconds he halts his progress toward the water to pinch a stone or shell, caressing each one as if it were alive. “Ah, man,” he says. “I’m going to keep them.” He’s half filled a pocket before Elvia opens a plastic bag to collect them for safekeeping.

At the waterline Luis slips off his shoes. The waves are tame. A fascination with bobbing, sparkling strands of seaweed draws him in, waist deep. He gathers great gobs of the stuff in both arms, twists his upper body like a shot-putter, and heaves it forward. Then he’s swinging a lasso. He makes Ozzy Osbourne signs with upraised index fingers and pinkies, drops back into slapstick pratfalls. His close-cropped brown hair—soaked in saltwater—is more bristly than usual; his mouth opens in an inaudible laugh. He points to the horizon and yells, “I want to go far away!”

Venturing out a few yards more, he pantomimes the crawl stroke convincingly enough so that a casual observer can’t tell he’s advancing himself on his knees. After about five hours in the water, he emerges looking as if he might be done, but he’s come out for a second just to chuck another shell onto the shore. The light fades, the beach goes from thronged to near desolate, and somehow Elvia persuades him to return to land. Luis rejects any notion that tonight he’ll be to bed sooner than usual. “No, I never get tired,” he says. Well before the traffic starts backing up at the 405 interchange, he’s conked out in the backseat, lips parted, breathing softly.

Ask Chris: What Happened to Santa Monica’s Hot Dog on a Stick?