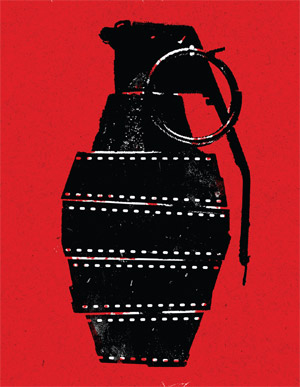 If you love movies where any minute a bomb is going to go off and everything teeters on whether the red or green wire gets snipped in time—even though you sit through the whole thing peeking at the screen through your fingers—then Kathryn Bigelow’s The Hurt Locker is for you. Not only is there one such situation after another, each more ominous than the last, but the bombs are in Iraq, a country caught in its own countdown to the detonation everyone knows is coming yet no one knows when. An unidentified number of days or months or years into the American occupation, the head of a special army detail dedicated to disarming mass explosives is killed and replaced by Sergeant William James (Jeremy Renner), who’s defused more than 800 bombs through know-how and sheer force of attitude. Showing the anarchy of Iraq no respect, James swaggers into uncertainty like a gunslinger kicking in the swinging doors of the saloon. To his fellow soldiers he’s one more element of craziness in a crazy place, ratcheting up an insanity they already can barely stand. The two specialists immediately under James’s command, who have a month remaining in their rotation, openly contemplate blowing him up before he gets them killed.

Clearly inspired by the Iraq war, the British comedy In the Loop is about London and Washington bureaucrats maneuvering both capitals into a conflict the public would never tolerate if it spent five minutes paying attention. When a weaselly foreign minister for “international development” (Tom Hollander) characterizes the prospect of imminent war as “unforeseeable” in a television interview, alarm bells ring in the corridors of power—though to those of us in the audience watching (not through our fingers anymore), it’s not altogether evident why. Is it because “unforeseeable” sounds like there will be a war or because it sounds like there won’t? To those making policy, the very vagueness of the word represents an unacceptable instability, a loss of control of the spin. The international development minister thinks he’s against the war, but a lot of other people think he’s for it and soon he is, whatever he happens to really think, assuming he really thinks anything or knows what it is if he does. Soon everyone else around him, from pols to generals who understand the war is a big mistake, is swept up, as though the war is starting itself.

The Hurt Locker and In the Loop are the first two Iraq films to have gotten their tone right. For a couple of years movies have been circling the subject of the war, occasionally taking it head on—such as in Paul Haggis’s In the Valley of Elah, which still felt compelled to masquerade as a thriller—but more often brushing up against it. If Iraq wasn’t the explicit landscape of such features as Rendition, Redacted, Lions for Lambs, Syriana, Charlie Wilson’s War, The Kite Runner, The Kingdom, and Body of Lies, most of the important points made by those movies were directed at the war, and the failure of these movies commercially and critically was born out of an unsolvable dilemma not unlike that of the war itself. Both the war and its films have taken place in the shadow of 9/11, which obscured the purpose and perception of the war exactly as anticipated by those who plotted it, including those who were planning it before 9/11 and who then used 9/11 to justify it. The movies were no less confused about this than everyone else. Filmmakers avoided Iraq while the war was popular; by the time they caught up with the public sentiment that shifted so rapidly, what the movies had to say was so obvious the audience didn’t feel they needed to hear it.

A cult filmmaker in the ’80s, Bigelow in the early ’90s seemed on the cusp of some breakthrough to a mass audience. That never came to pass, and while you can argue that her crime thrillers Blue Steel and Point Break, as well as the future-noir Strange Days, were underrated, there was something grim about them, even slightly nasty, as there was about the desert vampire flick Near Dark that put Bigelow on the map. As The Wild Bunch did for westerns, Near Dark escalated the violence of its genre and imparted to it poetry, which made the violence that much more horrifying. Since then, Bigelow, who began as a painter, has filled her work with unforgiving imagery that insists on beauty in what otherwise verges on the unwatchable. If for Bigelow it’s about the visuals, for In the Loop’s Scottish director, Armando Iannucci, who started in radio and TV, it’s about the words, most spectacularly delivered with lacerating panache by Peter Capaldi as a Whitehall spinmeister trying to rein in hapless ministers who don’t know how to zip it when words escape them. Like their movies, Bigelow and Iannucci couldn’t be more different on the face of it. The Hurt Locker reminds you of Full Metal Jacket, and In the Loop recalls Dr. Strangelove, and it may take a moment to realize that both touchstones are by Stanley Kubrick, who seems more different still. What these directors do share with Kubrick, and with each other, is a pervasive and finally overwhelming sense of folly, something that eluded the earlier Iraq movies in all their sobriety and sorrow.

It’s a cliché that war is folly. Treating World War II as folly would not only ignore history but betray the moral majesty of that war, the scale of its cost, the breathtakingly unambiguous evil that so distinguished one side from the other. It’s why World War II has been so facilely analogized by the proponents of every war since, including the invasion of Iraq, a country where the ruling dictator was routinely compared to Adolf Hitler whenever other arguments having to do with 9/11, terrorism, and amazing weapons that threatened us from 8,000 miles away showed signs of faltering. Ever since Vietnam, however, our wars have become more confounding, which probably is a good thing, and as the subject of a movie, even Vietnam never lent itself to the theme of folly as easily as does Iraq. What neither The Hurt Locker nor In the Loop is quite bold enough to do, though the latter certainly comes closer, is implicate its audience in that folly. The best Vietnam War movies, Francis Ford Coppola’s 1979 Apocalypse Now being the most obvious example, are infused with the tragic because they implicitly acknowledge how smart men could reasonably have believed Southeast Asia falling to communism might be a matter of mortal American peril. But while the human cost of Iraq is tragic, the experience itself hasn’t earned tragedy’s grandeur because the dimensions of its blunder were so evident to anyone who paused long enough to ask even the most slightly skeptical of questions. We can try to convince ourselves we were duped, we can protest that the “intelligence” was irresistible, we can insist on connections between the Iraq debacle and 9/11, terrorism, radical Islam; but too many weapons inspectors coming back from Iraq two months before the invasion were unable to find any of these weapons that supposedly were so massive and imposing they could be delivered halfway across the planet. On the eve of that war to justify all wars, Hitler had the biggest military machine in the world, and it wasn’t buried in dunes but was out on the boulevards of Berlin for the world to see. Iraq never had the biggest military machine in the Arab world, let alone the Middle East, let alone the rest of the world.

An epigraph at the outset of The Hurt Locker alludes to the intoxication of war, the addiction to its rush by those like Sergeant James who fight it most mercilessly and successfully. But by the end of the movie we realize it’s in no small part the absurdity of the war that James revels in, and by comparison the absurdity of standing in the cereal aisle of the supermarket trying to choose among the Cheerios is trivial, not worth living for as much as he finds Iraq’s folly worth dying for. There may be nothing to do but either peek through our fingers at movies like The Hurt Locker and In the Loop or laugh at them; both get close enough to a truth that the responses could be interchangeable. Think long enough about the buffoonery of In the Loop and you may find you can barely watch, whereas the scene in The Hurt Locker when James digs from out of the parched desert ground the chains and cables of one bomb only to find he’s pulled up half a dozen, sufficient to blow Baghdad off the earth, is in its own way the most hysterical of all. Cracked cowboy that he is, James himself might guffaw, if only the sound of his laughter wouldn’t shake the bombs from their sleep. Sooner or later, of course, when more is at risk than merely his own life, there’s a bomb James can’t defuse. “I’m sorry” is all he can say to the Iraqi man strapped to it. But not sorry enough never to come back for more.

Illustration by The Heads of State