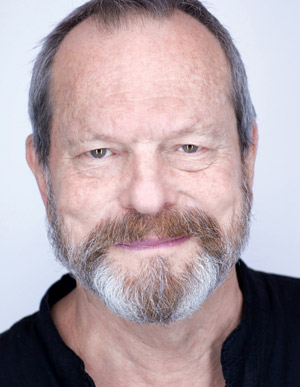 Once you get used to the idea, it makes sense that Terrence Vance Gilliam was an L.A. kid, as much as it makes sense that after college he expatriated to England, with its druid-haunted history and Arthu-rian legends. Gilliam grew up in the San Fernando Valley before it was suburban, when Los Angeles was still the New World’s tabula rasa, the unwritten future as a geological oxymoron of orchard and wasteland. A prospective cartoonist, he might have been expected to feel at home in animation’s backyard of affable mice and incomprehensible ducks and flying elephants. But Gilliam was an anarchist at heart and his whimsy was darker, and when he returned to L.A. in the mid-1980s, it was as the prodigal, locked in a battle over his masterpiece Brazil. Universal Studios wanted to chop the movie by a third and change the ending. Thus, ten minutes from where he went to high school, the locus of Gilliam’s crucible as an artist was the studio’s executive-office monoliths studding the mouth of the Cahuenga Pass like a modern and defiled Stonehenge, unquantifiable secrets traded for something shoddier. Gilliam responded publicly with full-page ads in the trades and clandestinely with guerrilla screenings for students and the local critics, who promptly voted Brazil and Gilliam the film and director of the year. Within days Universal released Gilliam’s version of the movie. But Gilliam had learned once and for all how the make-believe that his hometown inspires also is rendered by that town a commodity.

On first arriving in London in the 1960s, Gilliam had become part of the legendary Monty Python, an odd man out as both a Yank and the guy who gave visual expression to the comedy troupe’s verbal wit and literate sense of the absurd. He was the original director of its feature debut, Monty Python and the Holy Grail, but during filming one afternoon he became so frustrated directing the Pythons that he went off to take a nap and woke to find he had been replaced. (In the movie’s famous duel between the Green and Black knights, the heavily armored Gilliam is the former, inflicting the “flesh wounds” that leave his opponent limbless.) From that experience up until a recent star-crossed years-in-the-unmaking film about Don Quixote, Gilliam has been a storyteller at odds with everything and everyone but the story itself and the will to tell it. So it’s inevitable that he would have a few things in common with the ancient teller of stories at the center of his new movie. In The Imaginarium of Doctor Parnassus, a rickety old horse-drawn traveling sideshow meanders through present-day London, beset by louts hurling ale bottles in the night and the disapproval of Leadenhall Market matrons shopping themselves into an afternoon stupor. The wagon’s main attraction is a “mirror” through which one steps to find his or her fantasy turned into a psychedelic Rorschach, along with the power to reimagine oneself. When the doctor’s daughter and the apprentice who’s futilely in love with her rescue a man hanging by a noose over the Thames, the resurrected grifter, played by Heath Ledger, believes he’s discovered a lucrative scam. A few tumbles through Parnassus’s tinsel looking glass, however, reveal that he’s only become his own mark.

More than any film he’s made, Parnassus sums up the Gilliam sensibility that long ago rejected L.A. for ye olde tallish tales rooted in the Dark Ages. It’s not an accident that Brazil took further the retro-tomorrow that Blade Runner hinted at three years before, the shock of the new ticking to the clock of the old, and movies like 1991’s The Fisher King and 1995’s 12 Monkeys have set themselves in the contemporary or postcontemporary by turning time upside down. Gilliam is a time bandit, not unlike those for whom he named his 1981 breakthrough solo hit. The future is a regression into an alternate past that knows too much and can reclaim only the barbarities but none of the enchantment. In the right-now of Parnassus, outside the mobile imaginarium, storytelling is a black and lost magic, as the millennium-old doctor (Christopher Plummer) strikes a deal with a Devil who from first growl is unmistakably Tom Waits. For Gilliam the modern imagination is soulless: James Cameron’s state-of-the-art avatars or 2012’s computer imagists drowning the West Coast in tectonic slabs. L.A. and the devices of modern imagining are made for each other, while the old imagination is transporting for what it can’t literally realize. Gilliam’s alchemy—he’s been involved in the art direction and production design of his most quintessential films—isn’t to make the fantastic look as “real” as possible but as unreal, an unabashed artifice smudged from top to bottom with the fingerprints of the mind. Brazil doesn’t take place in Brazil. Rather it’s a reverie for an interior country where the protagonist is beyond oppression’s reach.

Blunt as it is to say, and mysterious as it is in the ways these things often work, it’s in this mood of insurrectionism that Gilliam’s vision could absorb the tragedy of Heath Ledger. When Ledger died midproduction, necessity at its most terrible mothered the invention of an array of new incarnations as witty as they are unreliable: Beyond the Parnassus looking glass, Ledger’s professional liar is transformed into a lothario who looks quite like Johnny Depp (shouldn’t every lothario look like Johnny Depp?), waltzing a middle-aged woman along canals lined with ladies’ shoes; an ambitious social climber who’s the spitting image of Jude Law, scrambling up freestanding ladders that reach to the sky; and a power-hungry blackheart posing as a philanthropist saving children he’s really exploiting, in the process unleashing his inner Colin Farrell. Ledger’s loss hangs over The Imaginarium of Doctor Parnassus but never heavily. If anything, it imbues the movie with passion and a sense of purpose, a determination to not let the actor down, to make his last movie worthy of him.

I confess what a lot of people won’t have trouble figuring out, that I’m congenitally inclined to give a filmmaker like Terry Gilliam the benefit of every possible doubt. He goes his own way and always has, on terms so singular that questions about whether his films “work” miss the point for some of us. By the standards of what audiences expect from conventional cinematic narrative, Gilliam’s movies certainly are erratically paced, loping from set piece to set piece without bothering to justify let alone ease the transitions, much as do the old myths of which the director sees himself as inheritor. In its rhythms and logic Gilliam’s storytelling is as much a throwback as his design sense, which recalls the early-20th-century filmmaker Georges Méliès more than anyone today. The Imaginarium of Doctor Parnassus is the most personal Gilliam picture since 1988’s The Adventures of Baron Munchausen, and let the debate begin as to whether that’s a good thing. (The correct answer is yes.) While perfectly smart and reasonable people make the case for the successful and better-received films like The Fisher King and 12 Monkeys, on the grounds that their derivation from other sources imposes a discipline on Gilliam he doesn’t have otherwise, I find these movies, especially The Fisher King, are oddly misshapen, showing the lumps of trying to graft Gilliam onto something or someone else. If he’s a flawed auteur—and of course he is—he’s more flawed as a hack, even in a medium where hackwork can be raised to the sublime, in the venerable tradition of Michael Curtiz or Howard Hawks. Sometimes for Gilliam, as in Brazil, the imagination is a means to an end, an escape from a world made monstrous by the prevailing conviction that nonliteral thinking is a step toward lunacy. Sometimes, as in Parnassus, the imagination is its own end, in a realm of storytellers who insist on telling their stories in defiance of kings or the Devil. Either way, Gilliam is a director for those whose fondness runs to originals, renegades, and anyone who suspects, as Doctor Parnassus must, that unlike kings, the Devil isn’t just an adversary but a kindred spirit.