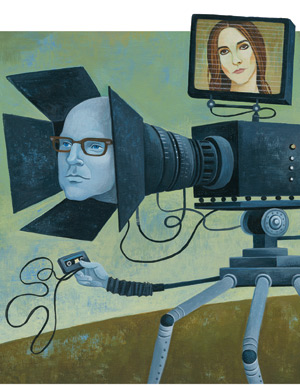 The first feature I wrote for this magazine, in January 2001, was a profile of Steven Soderbergh. Enjoying mainstream success with Erin Brockovich and the just-released Traffic a dozen years after his 1989 indie milestone, Sex, Lies, and Videotape, Soderbergh was about to become the first Academy Award director of the new century. I watched a rough cut of Traffic, and though I thought its script was problematic (writer Stephen Gaghan also won an Oscar, so that shows what I know), the assurance of the direction signaled Soderbergh’s arrival in the big leagues to anyone who needed convincing. He was a reluctant if cordial interview, my second reluctant if cordial interview in a few months, coming off a conversation with Neil Young that had me chasing him all over the country. I didn’t think anybody could be as elusive as Neil Young.

When Soderbergh insisted that he had no auteurist ambitions and aspired to be a Hollywood journeyman, a director for rent doing what came his way, it was hard to tell if he was being coy. As a sucker for ambition, and maybe more tolerant than I ought to be of the pretensions that accompany it, I was a little shocked by Soderbergh’s diffidence. Resistance to ambition in the hope of avoiding pretension is not unlike resistance to emotion in the hope of avoiding sentiment. Soderbergh is as smart as anyone I’ve met in the movie business but a cooler customer than I suspected was good for his art, and while it would be an overstatement to call our meeting disenchanting, it worried me. In retrospect I think he was chastened by his first dozen years in Hollywood, and compelled by some survival instinct to recalibrate what was going to be possible in the century to come.

As far as movies go, 2009 wound up being the most 21st century of 21st-century years. More than ever the movies were dominated by the monumentally huge and the intensely small, with a smattering of triumphs in between; like the book world, which during the last two decades has forgotten how to publish what it used to call the “mid-list,” Hollywood is increasingly vexed about how to make films that are less than blockbusters but more than projects too intimate to command mass audiences. Part of this is a response to new media, just as movies in the ’50s and early ’60s responded to the new medium of television with Cinemascope that TV couldn’t match as well as subject matter TV couldn’t touch. Movies got bigger or sexier or, in some cases, both—smoldering Bible epics like Howard Hawks’s 1955 Land of the Pharaohs, with Joan Collins as a hot Egyptian babe, or ’56’s The Girl Can’t Help It, with its wide-screen rock and roll serenading Jayne Mansfield, who was wide-screen even on small screens. In ’09, no film had a greater impact than Avatar or Precious, the first more sensorially mind-boggling and the second more starkly uncompromising than even cable can accommodate. In comparison, something as topical, smartly written, and shrewdly directed as Up in the Air looks like the stuff of HBO, with greater star power.

Avatar made clear that Hollywood does spectacle on a scale too awesome for any other medium to replicate—so why shouldn’t it? Precious made clear that the hinterlands outside Hollywood aren’t going to stop engaging the collective audience in the dark with stories that are more rivetingly personal than many can stand. If the box office favors to an adolescent fault the spectacle, such as Transformers and other candidates too obvious to mention, critics sometimes embrace to a fault the personal. An Education was the year’s most overrated film, never surprising you unless you count the performance by dazzling Carey Mulligan, who is headed for bigger things but isn’t for one moment believable as a 16-year-old. I wouldn’t be so hard on An Education if others hadn’t said such grand things on its behalf, and if advocacy for the small movie hasn’t become knee-jerk—unless it’s Precious, of course, which was met before it opened by the sort of backlash that blockbusters suffer. Apparently any serious film about black life, given the rarity of such a thing, is expected to sum up the whole of the African American experience and therefore inevitably must be found wanting, either never hopeful or never despairing enough, never joyful or tragic in the right ratio.

All of which is to say that I’m as astonished as anyone that the movie of the year wound up being about New Agey blue people with tails, flying around on dragons. If Avatar was just a bit better and less dim-witted, and if producer-director James Cameron was half the writer he thinks he is, it might be an easier case to argue. Notwithstanding that, I think it will prove a landmark for more than its cutting-edge technical accomplishments because, like The Lord of the Rings, its technology isn’t an end unto itself but is in the service of a story that its filmmaker cares about. The most startling metric of this may be the way that Avatar has become a source of political controversy, and though my own politics lead me to rally to the film’s defense, and though I think, for instance, that charges of anti-Christianity say more about modern Christianity than about the movie, right-wingers’ protests that the picture’s antimilitarism is simplistic aren’t entirely off base. But, you know, who cares? Avatar takes you somewhere you haven’t been before and shows you something you haven’t seen.

Avatar is the future of film—or one future anyway. A second, at the other end of the spectrum, is courtesy of not only Precious but Steven Oh-Don’t-Mind-Me-I’m-Just-a-Glorified-Hack Soderbergh. His last three movies are The Informant!, The Girlfriend Experience, and Che—about the intersection of schizophrenia and corporate nihilism, the days and nights of a high-end escort during a national financial collapse, and a revolutionary grappling with his own mythos as well as social injustice. That’s a pretty damned interesting résumé for someone who keeps telling us he’s not an auteur. Some complain that Soderbergh’s films are half-baked, but, as it happens, the guy he reminds me of most is his brother in elusiveness, Neil Young. Soderbergh’s filmmaking has taken on a freewheeling punk quality that’s less interested in formalism, never mind slickness, than in locating some pure cinematic truth. This is while preserving an iconoclasm that comes naturally to him, and while avoiding the kind of self-seriousness and arty airs that put him off, which I’m guessing is what was really behind the hired-gun claims he made for himself nine years ago. Casting porn actresses and working fast on shoestring budgets and making end runs around theatrical distribution in order to mainline his work straight to our TVs and computers, even as he knocks out elegant diversions like Ocean’s Eleven/Twelve/Thirteen, Soderbergh has had the most outlaw career of any Oscar director ever. Whether they’re “successes” or “failures,” his movies are rarely dull, and since his late-’90s romantic thriller Out of Sight—arguably still his best—he’s proved that on the occasion when he finds the sweet spot between the “experimental” (a term I’ll bet he hates as much as I do) and the “conventional” (another dubious distinction), something great is possible. Short of greatness he continues to fascinate, and has tomorrow written all over him as surely as he did in 1989.

Which leaves, until Soderbergh returns to it, and assuming it holds no interest for Cameron anymore, film’s third future, that sweet spot in the amorphous middle. As someone who’s championed Kathryn Bigelow in the unlikeliest circumstances (having years ago written for another publication probably the only cover story on the Jamie Lee Curtis cop thriller Blue Steel), I feel compelled to point out that Bigelow is hardly a flawless filmmaker, given fitful storytelling that delivers bravura scenes better than it forges the emotional connections between them. But as the masterpiece of one of our most audacious directors, The Hurt Locker ultimately defies nit-picking, and it’s a hybrid that feels prophetic—a blockbuster with an indie sensibility, or maybe the other way around—while also saying something about war in the 21st century, mainly that it’s not a lot different from war in the 11th. A thousand years haven’t changed how war runs on the adrenaline of oblivion’s seduction. In 2009, the movies offered three doors to 2010 and beyond, each leading somewhere new. There’s no reason to choose just one.