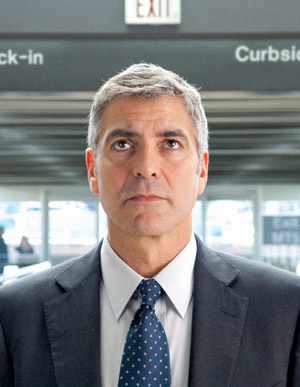 I hated the first job I lost, but losing it was a trauma anyway. I wasn’t laid off; I was fired—a more hostile denouement that involved the typical end-of-Friday meeting in the boss’s office, the legally requisite second party taking notes should the matter come to blows, the document I was presented and refused to sign (something about “insubordination” and being a “disruptive influence in the workplace”), and the burly tough guys waiting at my desk to escort me from the building. Certainly George Clooney, a job assassin for hire in Up in the Air, brought in by companies to do the dirty work the executives can’t face, was not on the other side of the table calmly assuring me that the downward swish of the upraised ax was just a breath of fresh air by another name. No, my exec wasn’t going to miss this for the world. He had been looking forward to it all week. And even though my termination proved to be exactly the sort of liberation that Clooney promises his victims, the sense of being mugged was unshakable. I would get fired from at least two other jobs in the years to come (makes you wonder, doesn’t it?), and I don’t remember Clooney holding my hand on those occasions, either.

Like 1981’s Reds, with its witnesses testifying to the veracities and unreliabilities of history, Up in the Air is punctuated by the faces of those abruptly untethered from their livelihood. All protest they never saw it coming, which might seem delusional, but that’s how it works: Only afterward did I realize the hammering I’d been hearing for months was the sound of the gallows being built. Most of Up in the Air’s witnesses are nonactors led to believe that writer-director Jason Reitman was making a documentary about people losing their jobs. Up in the Air is a good movie, sometimes a really good one, full of good things that warrant comment, but what struck me was how part of being good is being lucky, and that in the movies, being lucky almost always involves fortuitous timing of an unforeseeable sort. Unlike the book that’s read alone or the song that’s heard alone, a film is still something usually experienced by strangers gathered together in one place at one time, and when the movie speaks astutely to what everybody is going through, it has a special impact. If it can glean from the timely the timeless, it’s all the more powerful.

That most ubiquitous and beloved of Hollywood films, Casablanca, had been kicking around the studios as a property since before World War II, not reaching the screen until conflagration had overwhelmed Europe for three years and then finally engulfed a resistant America. Only weeks before the premiere, the Allies invaded the very part of the world the movie portrayed as the conflict’s geographical and moral crux; universal themes of sacrifice and engagement that might have seemed cookie-cutter suddenly took on the pertinence of a newsreel. In the early 1970s, with Watergate emerging as the political scandal of the century, Chinatown and the first two Godfather pictures became modern noirs of American corruption. Of course narrative is informed by context rather than driven by it. Stories absorb audiences because their characters aren’t functionaries of a zeitgeist but sometimes, like Humphrey Bogart or Jack Nicholson, operate in defiance of it. Often in an attempt to capture one era a movie better captures another: Among the inspirations Reitman has cited for Up in the Air is Shampoo, a film released in the mid-’70s that is set in the late ’60s and most keenly anticipated the early ’80s. Based on a 2001 novel by Walter Kirn and in the works for most of a prosperous and clueless decade, Up in the Air is uncommonly blessed by dumb coincidence or a prescience that would pique the envy of Nouriel Roubini. It was shot last winter just as the Great Recession rolled out beyond subprime mortgages and the stock market into the lives of everyday people, and now opens to layoffs more epidemic than swine flu. The movie’s cameos of the newly disenfranchised are devastating and elevate Up in the Air, perhaps in spite of itself, to something more than satire or lark.

It would be silly to argue there’s anything shrewdly calibrated about the casting of George Clooney. Is there ever not a good time to have Clooney in your movie? But in the years since he began talking with Reitman about Up in the Air, several things happened. He won an Oscar. He proved his seriousness as a filmmaker with the fine Good Night, and Good Luck, for which he was nominated for other Oscars. And he became unabashedly high-profile in his political concerns for the downtrodden, not to mention an early supporter of a new president now beset by the task of saving people’s jobs. This last is important because stardom involves an unspoken pact between the performer and what the audience knows about him offscreen, which is to say that, played by anyone else, “termination engineer” Ryan Bingham would be repellent. Relieving others of their jobs, Bingham loves his, with its vagabond perks that he has down to an oxymoronic science: the card swipe at the airport check-in desk that spits out a boarding pass, the collapsible carry-on luggage that opens and folds at the beckoning of the security X ray, the shoes that slip on and off almost epidermally. He’s a nomad of the gulf streams, with vaporized lives in his wake and one-night stands that are gone with the sunrise (except the one he can’t shake off, with the sensational Vera Farmiga), and while jetting from city to city against a tableau of chilly and foreboding whites, all ice and clouds, Bingham delivers motivational speeches about how not only things but people weigh you down. “The slower we move,” he advises, “the faster we die. We’re not swans. We’re sharks.” When he’s saddled with a protégé (Anna Kendrick, stealing almost every scene she’s in) who has recommended to the company a more efficient method of canning people by video, we can’t be sure whether Bingham objects to the cold impersonality of the plan or to the way it threatens his goal of 10 million air miles. Everything we know about Clooney the actor, on the other hand, even in his resolute bachelorness, assures us that inside Bingham is a humanitarian screaming to get out. Knowing what we know, we can hear the strains of compassion, if not mercy, in the executioner’s song.

Clooney may be the perfectly timed actor for a difficult national moment, and ever since he found his groove more than ten years ago in Steven Soderbergh’s Out of Sight, he’s had a tendency to make better almost anything he’s in, including the last 20 minutes of Up in the Air, which are the movie’s weakest. But notwithstanding its apparent synchronicity, Up in the Air could prove a strange parable after all in an era moving too fast for relevance to keep pace. Last winter’s terror of another great depression already has given way to this winter’s impatience with a recovery that isn’t fast enough; sometime over the summer the country’s mood went straight from dread of the problem to anger at the options: Do not pass optimism, do not collect a sigh of relief. Up in the Air suggests that human bonds are what sustain people in the hardest times, but this conclusion feels a bit perfunctory, an obligatory gesture to uplift and redemption that the movie doesn’t fully believe. When Bingham makes his big move in the direction of emotional commitment, the approaching punch line can be spotted from an altitude of 30,000 feet. That said, in the tradition of slightly bitter Depression comedies written by Preston Sturges and Billy Wilder before they began directing slightly bitter wartime classics, spiritual desolation at the frigid dawn of an uncertain century never has been smarter or sassier than in the supersonic Up in the Air, which purposely keeps at least one foot always touching the ground.