Home TV The Next Frontier 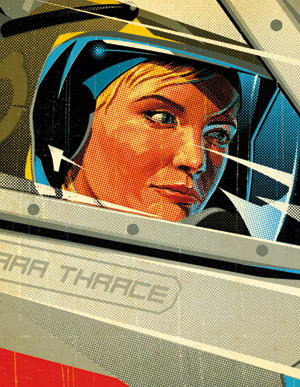 This past summer the only thing that made me forget the mortgage and November’s election was Battlestar Galactica. If this sounds unlikely, I understand. Aside from an aberrant burst of acclaim—Time named it the best TV show of 2005—Galactica has been absent from annual top ten lists and has never won a major Emmy. While its champions have talked it up for half a decade, the rest of us couldn’t help remembering it was originally a cheesy Lorne Greene show in the late ’70s, the lightweight’s Star Wars, which itself was lightweight. I would like to think at this point in my life I’ve gotten over this sort of critical correctness, but apparently not, because I also dismissed Galactica until one or two too many people whose opinions I respect urged it on me. So as July turned into August, after everyone else in the family had gone to sleep, I mowed through Galactica on DVD in the course of several weeks, vacillating between astonishment that the show could be as good as it is and shame at having fallen in with a lemming culture.

This, then, is a mea culpa, and if it’s largely characterized by the zealotry of the convert, hold that against me and not the show. Galactica is that thing that always seemed possible in science fiction but for whatever reason hasn’t been: an adult drama, built around adult relationships, that happens to be set in a science fiction context, which in this case is a nomadic armada of spaceships searching for a harbor among the stars. At the same time, the series abounds with the big ideas—about politics, philosophy, myth, and theology—that the best of sf always has been known for. Most TV isn’t meant to be watched in large swaths the way I watched Galactica. Even the best series have a repetition of motifs that is part of the point, and by the third season of Deadwood or the fifth season of The Sopranos you can tell the writers are making things up as they go along. So what’s striking about Galactica is the scope; it’s a nearly 80-hour epic that unfolds as though it’s been thought through from the beginning. Even the weaker episodes usually advance the larger plot in ways that don’t become apparent until later.

Galactica’s central premise isn’t in the least original. Humankind nearly has been wiped out by a race of evil robots called Cylons, some of whom—as represented by Tricia Helfer, Grace Park, and Lucy Lawless—are disconcertingly vixenish. The central question to which this unoriginal premise gives rise isn’t original either, having preoccupied virtually everything novelist Philip K. Dick wrote: What makes us human? Is it simply that the hardware of the body—veins and muscle and nerve endings—is more authentic than wiring and chips and electricity? Are memories and emotions less real if they’re programmed rather than experienced? Dick never pursued the implications to more unsettling effect than does Galactica. For good measure the show throws in post-9/11 paranoia, as the fleet’s commander, William Adama, and the tenuous, floating republic’s president, Laura Roslin, flirt with martial law, dictatorship, and electoral fraud while struggling to preserve something resembling a democracy, assuming the republic can survive at all.

Battlestar Galactica is the most subversive TV series I’ve seen, the simplest example being the word “frack,” employed in place of the more-terrestrial expletive that basic cable doesn’t allow. With a vowel change here and a consonant thrown in there, the writers make an end run around the problem of censorship that Lenny Bruce would have admired, and “frack you,” “frack this,” and “motherfracker” blow through the dialogue like an asteroid storm. It’s inspired, and one can only imagine the censors’ dismay. More profoundly, Galactica routinely fracks with every assumption and emotional investment the audience makes: That these humans are not earthlings at all—the Galactica searches for an Earth that Adama suspects is a myth—and that none of this may be taking place in the future but rather in a distant past are only the most predictable revelations, coming early on. In the face of human pettiness, the Cylons occasionally display flashes of a greater nobility; and while, like the ancient Romans, the humans worship a plurality of gods, the Cylons are the monotheists, for whom resurrection isn’t just a religious tenet but technological reality. Picking up where Blade Runner left off, more and more of the Galactica’s crew learn that they themselves are the Cylons (whom they call “toasters”) they’ve come to hate and dehumanize. To everyone’s dismay, by the second season humans and Cylons are having babies together, which has the effect of exposing humanity at its wisest and most ruthless, its most compassionate and murderous.

As the schoolteacher who, by a fluke of constitutional succession, becomes president, Mary McDonnell’s Roslin turns out to have a Machiavellian streak that coexists with an almost unhinged mysticism. Imbued with Edward James Olmos’s gravitas, Adama is a philosopher-warrior ready one moment to risk the human race for the rescue of a single individual and ready the next to line peaceful strikers up against a wall and shoot them. Unlike so many shows, these outbursts don’t just get filed in the biographical database and forgotten after they’ve served their dramatic purpose; a season later, consequences still manifest themselves in confrontations and shifting loyalties. Of all the characters, the biggest piece of work is top gun Kara “Starbuck” Thrace, around whom a cult has formed among Galactica’s audience since the series’ debut. Starbuck is a deeply damaged, hard-living Viper fighter pilot filled with attitude, rage, and self-destruction, and it’s a measure of how good relative newcomer Katee Sackhoff is in the role that you never doubt she can kick your butt or drink you under the table, or that something unspeakably fateful lurks within her.

By the third season laser battles take a backseat to all these complexities of character and to the decidedly worldly themes of racism, vigilantism, betrayal, and psychological abuse. Played out on deep-space barges that have the claustrophobia of Das Boot, Galactica conveys a dread I’ve never seen on a TV show and becomes not only a political drama, an odyssey, and a wrenching opera but a horror tale. The horror isn’t that of the cheap shock or sadism that distinguishes so many movies these days but rather of moral bearings being profoundly rattled, among the humans whose notions of humanity all become so suspect and among the Cylons who, in their desperate desire to approximate humanity, discover in themselves what no computer can program: ambivalence. In part because the characters take priority over everything, every turn of Galactica’s grand narrative earns its impact because it’s born of what’s come before, and by the third season’s stunning climax you realize the story can go anywhere, anything may be true. If nothing else, you’ll never hear Bob Dylan’s “All Along the Watchtower” the same way again.

Battlestar Galactica is in the middle of a fourth and final season that’s been bifurcated by last year’s writers’ strike (the second season was divided in two as well). For the first time I’m a bit worried. The rush to a conclusion often has been brilliant and haunting but also convoluted enough to leave you wondering if the story is shuddering from the warp speed; Starbuck’s role in Galactica’s destiny becomes murkier rather than clearer, and the mysticism may be swallowing its own tail. When the identity of the 12th Cylon—something I was convinced I had figured out but now am not so sure—is revealed, it damn well better add up; and the big twist at the season’s halfway point was a letdown, something we’ve seen before and that would seem not to make sense, given a scene in the second season when crew members entered a portal that left them in a grassy field on Earth, under a night sky of constellations. This assumes that the writers aren’t smarter than I give them credit for and that there won’t be, when the fourth season resumes mid-January, another twist on the first twist.

Of course, things like portals to Earth and “the 12th Cylon” don’t mean anything to you now—but that’s about to change, as long as you can navigate the Sargasso Sea of Galactica’s permutations on DVD, not to mention the paperbacks, comic books, games, and extraneous Webcasts. No need to watch the late ’70s series or anything to do with it, including several features; and no need to buy the indispensable 2003 miniseries that served as a pilot, since it’s included in the Season 1 box. When you get to Season 2.0, as it’s designated, you should skip the episode titled “Pegasus” at the end, because a longer and superior version opens Season 2.5. If you start right now, you’ll finish Season 3 just as Season 4.0 is released the first week of January, which gives you a week until the last ten episodes begin airing mid-January. I remain confident Galactica will pull it off. If it doesn’t, at this point nothing can shake its claim to being not just the greatest science fiction series of all time but—with the possible exceptions of The Wire and 1989’s miniseries Lonesome Dove—as good as any American TV ever. The election is over, and especially these days, mortgages come and go. But as Starbuck aims her Viper into the vortex, past the point of no return, I’m going with her.