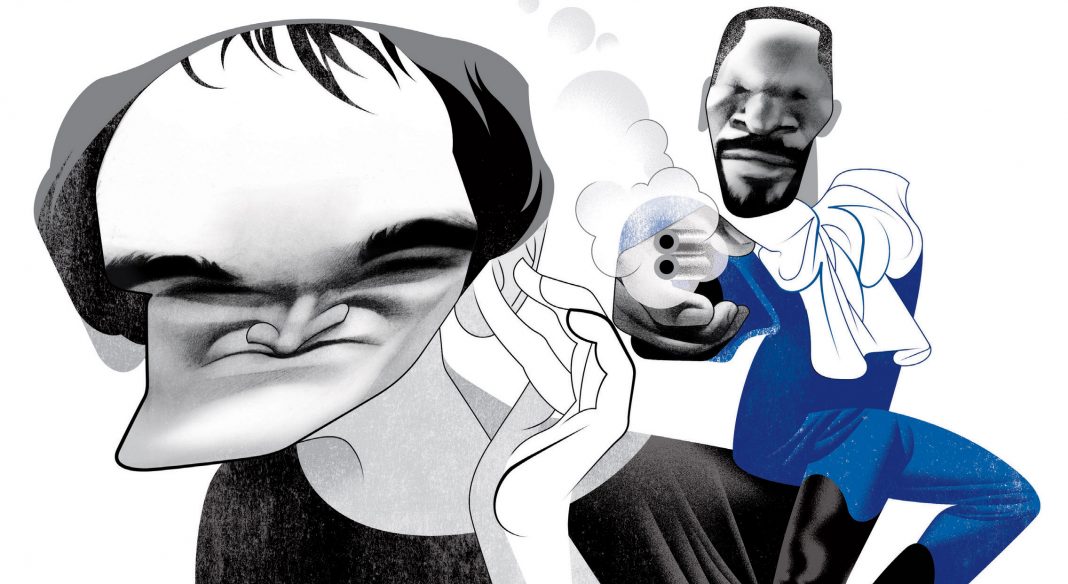 Quentin Tarantino is my 15-year-old son’s favorite director, and by that I mean no condescension to either Tarantino or my 15-year-old son. As Miles becomes more cinematically conscious, he could have worse inspirations: Tarantino has the sensibility of a highly precocious adolescent, making the sort of movies that adolescents love (which is to say, the movies that the adolescent in all of us loves) while bringing to his pictures a savvy as sophisticated as anyone this side of Martin Scorsese. Of course Miles finds Tarantino’s movies exciting and violent, but he also recognizes and appreciates that the 1970s funk music of Django Unchained, Tarantino’s new opus, doesn’t belong any more than Nick Perito’s “The Green Leaves of Summer” and David Bowie’s “Putting Out Fire” (both from films of a more vintage era) belong in Tarantino’s World War II epic, Inglourious Basterds. Set in a vaguely 1800s America that seems at once before and after the Civil War, with a European bounty hunter and an ex-slave out to even a score and rescue the ex-slave’s wife, Django’s mash-up makes an instinctual sense to younger audiences that the older literalists among us can’t understand. Tarantino is a walking Cinema 101. By way of Django, Miles knows about the ’60s Italian westerns of Sergio Leone; and when he gets around to Jean-Luc Godard, Bande à part will be familiar, too, by way of Pulp Fiction if not the name of Tarantino’s production company (A Band Apart).

Though he’s unlikely to replicate the didacticism that came to characterize the French director’s work, Tarantino is the American Godard for how his movies are about The Movies. He’s operating from a more culturally debased generation of tropes than did Godard—not only spaghetti westerns but grindhouse and slasher, blaxploitation and commando flicks, Italian giallo and Hong Kong kung fu and hot-chicks-bent-on-revenge vigilante pictures—and unlike Godard, who secretly feared that the movie junk he adored wasn’t worthy of his love, Tarantino has no such reservations. His films can be witty and knowing, but I’m not sure he’s shot a single frame that’s ironic, because irony distances the artist from his art, and Tarantino has no interest in that. Irony is the last refuge of the jaded, and Tarantino is anything but jaded; he lives and breathes his films, and thus they’re deeply personal, which is part of what makes them irresistible and also part of the problem. If this is what constitutes the personal for Tarantino, he needs to get a life, assuming that’s still an option. You would be hard-pressed to think of a Tarantino scene that doesn’t seem straight out of his imagination rather than something resembling experience—an intimate or grown-up interaction between a man and woman, for instance, unless you think the blunt carnal encounter between Robert De Niro and Bridget Fonda in Jackie Brown qualifies (“That was fun” is Fonda’s deadpan response afterward).

Tellingly Jackie Brown is the one Tarantino screenplay based on another source, Elmore Leonard’s novel Rum Punch. The story of a ruthless gunrunner, the flight attendant who smuggles money in and out of the country for him, and the bail bondsman who falls for her, Jackie Brown also is the least violent of Tarantino’s films, the bloodshed conspicuously at a distance or offscreen. It’s difficult to be sure how much all this explains why it’s my favorite Tarantino, and it sounds like I’m damning Tarantino with faint praise for a film that has less of his bravura while demonstrating some of his subtler strengths: a gift for gab (the scenes of greatest tension in Jackie Brown as well as Inglourious Basterds are extended conversations) and an indelible sense of character, or at least a knack for casting those characters (with actors who go on to win accolades and Oscar nominations). Avoiding the fetishization of violence that preceded it—particularly Tarantino’s first feature, Reservoir Dogs, whose infamous torture scene overpowers the rest—Jackie Brown would almost be a recantation of the Tarantino aesthetic if the next movie weren’t Kill Bill, the most ferocious of all. The two-volume Kill Bill epitomizes the Tarantino quandary as it exists for both director and audience. Of his major pictures, it’s the emptiest, and I like it anyhow. Miles loves Kill Bill (I’m sheepishly aware that the dereliction of a father who lets his 15-year-old watch such mayhem is a subject ripe for discussion), but being a classicist he still rates Pulp Fiction best and sometimes for the right reasons: the brilliant, loopy structure and the mesmerizing talk and characters that Miles calls “vibrant,” a word I’m not sure I’ve heard him use otherwise but as good as any description I could come up with.

Miles’s enthusiasm is proof that the single most influential American film in the 30 years since Blade Runner hasn’t lost its sway. In retrospect Pulp Fiction isn’t just the template for everything Tarantino has done but the yardstick by which everything else he does is measured one way or another. The larger question is whether Pulp Fiction is the ultimate fulfillment of all that Tarantino has to offer: a young man’s masterwork, not unlike Orson Welles’s Citizen Kane, that forecloses an older man’s possibilities. Even the outtakes of Pulp Fiction’s noir kaleidoscope of hit men, molls, and boxers searching for redemption have become famous. Uma Thurman’s psychomusical exegesis that everybody is either an Elvis person or a Beatles person is one of Tarantino’s shrewder observations (though I would add there are also Sinatra people). Pulp Fiction always will be the film that Tarantino is known for, bound to rank as well near the top of lifetime filmographies of Thurman, Samuel L. Jackson, Ving Rhames, Bruce Willis, and John Travolta, whose career was moribund until he landed his role over Daniel Day-Lewis. If Tarantino’s work exists in the shadow of Pulp Fiction, it’s only fair to acknowledge how every other crime picture that followed does, too, including the estimable likes of The Usual Suspects, Get Shorty, Snatch, Sexy Beast, and In Bruges. Tarantino skeptics, driven to agnosticism by the filmmaker’s yappy full-of-himself persona if not by the movies, nonetheless are hard put to deny Pulp Fiction’s impact.

Reservoir Dogs, which received a special-anniversary restoration and theatrical showing recently, was released 20 years ago, and the director will reach his half-century mark in two months. As Tarantino’s career enters its third decade, he claims a new fascination with serious things, such as America’s slave past in Django Unchained; you would be forgiven for suspecting, as I do, that such interest is less high-minded than the depiction of the 13th Amendment’s passage in Steven Spielberg’s Lincoln. Django deals with slavery the way Inglourious Basterds deals with the Holocaust (where the entire Third Reich is immolated in a bonfire of nitrate celluloid)—by turning history into a pop-trash-heap fantasia. Self-mythologizing drama king that he is, Tarantino hints that the upcoming ten years may be his swan song, after which he’ll do his best, at 60, to have the real life that he appears to avoid on principle. He insists that technology is driving him into retirement, and nothing would say more about Tarantino than if the conquest of 35 millimeter by digital is what domesticates him. A truly interesting and altogether different Tarantino picture may be waiting on the other side of the divide, if he’s capable of making it. Otherwise his legend is destined and doomed to live on with 15-year-olds, both the precocious-adolescent sort and the sort who grow up to be 15 forever, debating Quentin Tarantino with their sons.