Home Uncategorized The Joy of Self-Loathing 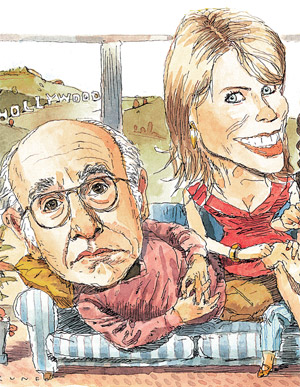 I’m convinced you have to be something of a sociopath to find Larry David funny, which scares me about myself. Over the last two decades David has built a television career on making you hate yourself for laughing, first with his prime-time Seinfeld and now with cable’s Curb Your Enthusiasm, which he writes, produces, and stars in. Given the self-absorption of the 1990s, Seinfeld’s timing was perfect, but that doesn’t change the fact that David is one of the culture’s stranger phenomena, his success achieved in the face of all the new rules. As is now legend, Seinfeld didn’t become a hit until its fourth season, probably the last time that will happen on something as mass market as network TV, given how the entertainment industry’s patience increasingly is measured in half-lives. Curb Your Enthusiasm, about the travails of a $250 million sitcom writer living in a Westside mansion, would seem too insular, maybe even elitist, to appeal to anyone between coasts. Yet the show now enters its seventh season, an object of fascination as much to people outside L.A. (a little like Entourage, another HBO series about the sort of beautiful egomaniacs who, if you live here, you’re bound to be one of or surrounded by).

David’s triumph notwithstanding, I suspect he would be the first to tell you he’s just a glorified stand-up comic. The ’70s were his years in the desert—once he walked offstage without performing a single line of his act because he didn’t like the look of the audience—before he landed on Saturday Night Live for a single season, where he had a single sketch. Reportedly David walked out on Saturday Night Live, too. Disgruntlement led to revenge with a series about a stand-up comic (cocreator Jerry Seinfeld) that included an early episode called “The Revenge,” based on the SNL experience. David is the Elvis Costello of TV moguls. As with the young Costello, who claimed to be keeping a blacklist of all the cretins he believed had thwarted his rise, vengeance is the stuff of inspiration, and in David’s case a dish best served funny. Seinfeld rendered the half-hour stand-up routine into a nine-year epic and, making allowances for I Love Lucy and The Simpsons, became the most popular comedy ever.

In Curb Your Enthusiasm David plays Larry David, the survivor of a show called Seinfeld who has spent most of the 21st century ambling around the house and neighborhood looking for things to be pissed off about and ways to piss off other people. In both shows David’s characters openly express impulses the rest of us suppress: After making a big deal out of giving a gratuity to the server behind a food counter, Seinfeld’s George, David’s fictional counterpart, tries to snatch it back from the tip jar when the gesture goes unnoted, a reflex most of us have felt and outgrown. In the opening episode of Curb’s new season, a transgression as trivial as a doctor helping himself to a drink from Larry’s refrigerator is the basis for heated discourse on the etiquette of such a deed, though few in Curb, most particularly Larry, ever feel they themselves are bound by such etiquette or understand why they should be. Though offended by the rape of his foodstuffs one moment, in other episodes Larry steals flowers from a grave to take to the director of a private school he’s mortally insulted, tries to get out of donating a kidney he’s promised to a friend, and poses as a racist so he can be excused from jury duty. Curb Your Enthusiasm is the Ben-Hur of venality and pettiness, even if TV isn’t quite 70 millimeter enough to capture the rip in the fabric of civilization on display in every episode. That so much of the show is improvised—with David giving his actors the circumstances of the scene rather than lines—only heightens the authentic sense of things breaking down. Seinfeld was a precedent for Curb, if a more amiable one, neither as outrageously funny nor as unsettling, mediated by characters who occasionally were lovable in spite of themselves. No one on Curb Your Enthusiasm is lovable, from Larry to his loutish agent, Jeff, and Jeff’s volatile wife, Susie, to Funkhouser, as shrewdly named as any character in Dickens, who’s certain he and Larry are best buds while Larry continually disabuses him of this notion.

The exception is Larry’s wife, Cheryl, who is sensible and empathetic and generous and kind of hot. It finally became so impossible to see why she would be with Larry that, last season, in a spasm of credibility, the show had her leave him. (The real-life David broke up with his wife a couple of years ago.) This happened when she was on an airplane plummeting from the sky and called to tell Larry she loved him, and he told her to call back because he was having his TiVo repaired. This season, as part of a scheme to get Cheryl back, Larry has agreed to something he’s been resisting, a Seinfeld reunion special. Larry plans on Cheryl’s playing George’s ex; this goes awry when Jerry promises the part to Meg Ryan. While matters unravel, Larry has had as houseguests a family of African Americans dispossessed by Hurricane Katrina and has been sleeping with one of them (Vivica A. Fox, playing someone who’s not herself). When he learns she may have cancer, he’s desperate to break up with her before the diagnosis can be delivered and he’s obligated to stay with and care for her. Through the streets of Santa Monica he races the doctor—the same one who molested his refrigerator—to reach the patient first.

There’s a perception among some in the Curb Your Enthusiasm audience that Larry is well meaning, that his faux pas are those of somebody who simply never untethered himself from social innocence and grew into the small graces the rest of us did. Of course this is nonsense: Larry isn’t remotely well meaning; everything he does is self-serving at its core. It may be that the audience needs to believe otherwise in order to forgive itself for loving the show, which is another way of saying that one of Curb’s agendas is to make the audience feel about itself the way David feels about himself, to make the viewer as much accomplice as witness. Having it both ways is an honorable tradition in art—a cake that can’t be eaten as well as had is sort of beside the point—and Curb Your Enthusiasm elicits self-struck bargains of every complicated sort. Much of David’s material is autobiographical; the most famous Seinfeld episode, “The Contest,” in which the show’s quartet competes over who can refrain from masturbation the longest, was based on an actual incident. So part of Curb’s modus operandi is how it relies on the right side of the brain to insist that the character of Larry must be like the real Larry, though the left side knows this can’t be completely true. When the distinction between narcissism and nihilism is so exquisite, more personal insight must be involved than the show’s Larry is capable of, not to mention a (horrors) moral sense. Otherwise there’s no violation for us to find funny, however uncomfortably.