Home Film The Essential Movie Library #3: The Passion of Joan of Arc (1928) 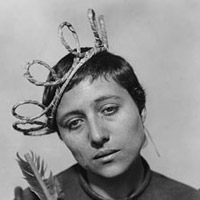 Released in 1928 after the advent of sound a year earlier when the silent era was in a rush to be over, and looking like nothing so much as a documentary filmed in 1431, maybe Danish director Carl Dreyer and his audience thought the movie was behind the times. More than 80 years later we’re still catching up with it. No amount of contemporary bombast on ten-story screens with digital sound can match the uncompromising intensity of Joan’s trial and execution—an orchestration of claustrophobic interiors and close-ups that are merciless, terrified, ecstatic.

At once majestic and unbearable, The Passion of Joan of Arc quickly became a legend. Its star Renee Falconetti (often credted as Maria), whose performance as Joan has been called by some the greatest in film history, never made another movie and allegedly went mad, and the original print, supposedly lost in one blaze or another, turned up half a century later amid the junk of a janitor’s storeroom in a Scandinavian mental institution. This is a possessed movie, exorcised only by our bearing witness to it.