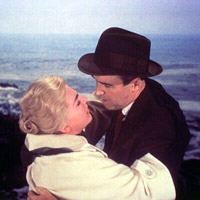 Alfred Hitchcock’s masterpiece hasn’t so much stormed the cinema pantheon as invaded it like a virus. As every buff knows, on its theatrical release Vertigo was a failure; only over the subsequent two decades when it mostly was unseen did its reputation go through a radical reassessment, happening not before our eyes but in our memories. Vertigo is an anomaly, a great film better watched alone: James Stewart’s growing obsession for Kim Novak becomes so palpably carnal and manipulative, his familiar decency vying with such manifestly dark impulses that he seriously creeps out a mass audience. Only in private does his plummet into the grave of desire make all the dreadful sense in the world.

Fate overruled Hitchcock’s casting of Vera Miles (who got pregnant); and as the remote, regal Madeline of the film’s first half and the wary, streetwise Judy of the second, Novak negotiates the labyrinth of self-invention as her identity catches up in the corridors behind her. With its Bernard Herrmann score echoing Tristan and Isolde, Vertigo is psychedelic noir, all the stylistic conventions turned inside out, crisp light and shadow rendered dreamlike shimmer, taut narrative pacing rendered dreamlike languor, harsh boundaries between life and death rendered dreamlike purgatory. Exclusive: Here Are All of the Movies You Can See at Hollywood Forever Cemetery in September