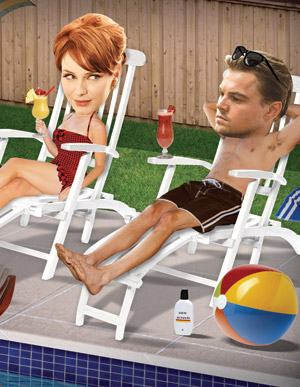 Summer wreaks havoc on the regimen of our amusements. All our rituals turn inside out, and viewing habits turn upside down. The sun hurtles toward the earth, and the grown-up cinema is commandeered by kids, while TV, the children’s plaything, launches new seasons about existential meth dealers and the sex-crazed undead. In the last days of July, during the summer of 2010’s first hot spell, this phenomenon reached critical mass, as satellite dishes scooped from the night sky TV’s most highly regarded show, Mad Men, within days of the film premiere that overshadowed everything else, Inception.

Storming the barricades of consciousness and wiring bombs to the id, a two-and-a-half-hour music video for the old Dickies song “Elevator (in the Brain Hotel)” except without the song, Inception wasn’t for children after all. In American popular culture, having your cake and eating it confuses people, and Christopher Nolan (half Brit, to get technical) has directed the artiest summer blockbuster since Francis Coppola, another notorious cake-haver/eater, made a Mafia movie. While comparisons to The Matrix and Philip K. Dick are apt enough, Inception goes for emotional profundity over epic mythology. It also reminds me less of Blade Runner and Total Recall and Minority Report and more of that most quintessential of summer diversions, the James Bond movie, right down to the Hans Zimmer score so clearly influenced by John Barry.

This isn’t just because of the similarly spectacular set pieces. It’s because Inception bears the same relationship as Bond movies to earthbound logic, namely none. By dispensing altogether with a pretense to reality, Nolan’s movie exposes Goldfinger and The Spy Who Loved Me and The World Is Not Enough as the Buñuelian fantasies they are, what with Inception’s implication that it’s all the dream of a woman who has died before the movie begins. If Inception really is about the dream language of movies, then it’s as much a movie about the movies as anything Quentin Tarantino has done.

Inception takes place mostly in the head, and the secret tunnel that runs to the movie’s heart, where there awaits a love story between Leonardo DiCaprio and Marion Cotillard. Everything that happens in Inception is driven by the yearning of DiCaprio—an “extractor” who not only invades dreams but mainlines inspiration—to see his children, and by the same wrenching dislocations of parenthood that distinguished other pictures this summer like The Kids Are All Right and Toy Story 3. I’ve never been convinced that the first Toy Story, a conventional tale told conventionally, was the animation pinnacle others claimed it to be. So you might take this into account when I suggest the third installment is the best, in defiance of the unwritten law of movie trilogies (see The Godfather, Star Wars, Alien, The Terminator, Spider-Man) that what comes in threes (or more) might have been better left at two.

Notwithstanding Inception, whose screenplay evokes more wonder than its CGI, masterful storytelling in summer movies has been the province of animation for a while now. Animation these days is as computerized as live action, but the scale of the narrative remains human, whether it involves training dragons or dodging celestial meatballs. The success of Toy Story 3 is quantifiable: the sound, at the end credits and to the kids’ puzzlement, of parents sobbing into their Dibs buckets. As with the first ten minutes of last year’s Up, Pixar has discovered the lost chord of Disney’s classic cartoons; and if none of the new pictures brave anything so searing as the matriarchal death and forest inferno of Bambi seven decades ago, Toy Story 3’s meditation on the passage of innocence is more complex. As the father of a preteen who is growing faster than my mortality can reckon with, I found Inception to have a wallop. But Toy Story 3 slayed me. More impressive, it makes the first two parts better, casting them in a context that haunts the whole.

I wrote about Mad Men’s first season, when I found its virtues—production values that cross noir with Douglas Sirk—to be delightfully shallow. Two seasons later the show is better, in part because it’s deeper, in part because Jon Hamm has developed more old-fashioned star power than anyone on TV. Mad Men reminds me of The Sopranos in its quality arc: overpraised the first season, a bit untethered in a second season that, in retrospect, laid the groundwork for a knockout third. Since The Sopranos’ apex was season four, I hope the trajectory holds.

Nothing better distilled both Mad Men’s intent and accomplishment than a scene last year when lovers met for a lunch-hour tryst as President Kennedy arrived in Dallas. An hour or so later, in their illicit afterglow, they turned the TV on and everything had changed, 190 million American private lives sprayed with the blood of American public life. Picking up a year or so after where season three left off, this summer opened as though in an alternate universe, with office paradigms fundamentally shifted and old marriages morphed into new; and even as his star in the advertising world burns brighter, Hamm’s Don Draper is having what can only be considered a psychotic breakdown, complete with hookers he pays to slap him around. As the sensibility that has been so mired in the rigid 1950s gives way to the ’60s and its possibilities, Mad Men feels more than ever like a show where anything is possible. Just as striking, the one constant is January Jones’s upscale suburban housewife who, shorn of an adulterous husband and now yoked to a devoted one, is crazier than ever. Motherhood—not having children but raising them—is beyond her. For the young Draper daughter, the sex, drugs, and rock and roll only a few years away beckon inevitably.

As a genre, the reality show waned this past summer, and I found myself wondering about the psychology of the season—whether the ritualism of American Idol isn’t as alluring or necessary amid other rituals that move outdoors. For anyone who needed something more real than Inception’s labyrinths but less real than an ocean of oil, director Roman Polanski’s extradition to the United States was denied by the Swiss government, and Mel Gibson, a few years after his infamous anti-Semitic tirade on Pacific Coast Highway, got back in touch with his inner Mel Gibson.

When Polanski was arrested last year in Zurich for the 1977 rape of an underage girl, I thought, Why bother? The case was decades old; the victim herself publicly had called for prosecutors to get over it, perhaps because she would like to; and to no dispassionate observer can there be doubt that the original prosecution was flawed, tainted with agendas that had to do with something other than justice. Within days Hollywood’s tone-deaf reaction steamrolled my own. If it wasn’t clear before that the case called for judicial resolution, it quickly became so. The Hollywood community contended that Polanski should be left alone because he’s an artist who’s made good movies, which absolves him of all kinds of things, and because he’s become the victim, cruelly sentenced to working the rest of his days in Paris, a fate apparently too dreary to fathom.

It’s unreasonable to expect of Hollywood an ethical sense less shallow or narcissistic than everything else about Hollywood. In a business so rife with insecurity, dominated by those who succeed by instinct rather than anything resembling sustained thoughtfulness, people choose moral brands for the same reason they do brands of clothing or movies themselves—as a means of figuring out who they are. But on Polanski’s release, Hollywood for once had the good judgment not to celebrate too loudly; and in a way the Gibson scandal, happening virtually the same week, couldn’t have been more convenient. If there’s one thing that puts drugging and sodomizing 13-year-olds in perspective, it’s beating the mother of your child and threatening to bury her in the garden, with a couple of racial epithets tossed in for good measure. Still, try not to hold it against me too much that after the shitstorm hit Gibson, I worried about him. Every day I expected to hear he had done himself harm, and was reassured only by how banal the more common means of suicide would be to someone with his martyr complex, for whom nothing short of crucifixion, or at least dismemberment on a rack, will do.

Back in the ’50s in which Mad Men began, poet Allen Ginsberg was another artist in trouble, on trial for his poem “Howl,” in which he wrote—to society’s dismay—about things not unlike what Polanski did and Gibson contemplates. As summer gives way to longer shadows, Inception’s extravaganza gives way to Howl the movie, about Ginsberg’s crisis and based on transcripts and interviews. Integrity and intelligence are all that the two movies share.

Writers and actors each covet the nature of the other. The actor regards with wonder the writer’s interior journey, while the introverted writer is in awe of an actor’s larger-than-life persona. Of course this is simplistic: In the creation of characters, the writer—like an actor—takes on other feelings, thoughts, and impulses, and in a performance the actor connects the role to his or her own inner life, like a writer. The writer and actor each has enough sense of what the other does to admire the mystery of the rest of it. Actors love the idea of portraying writers until they have to dramatize the turning of wheels inside writers’ heads; thus the writers that movies are about tend to be outsize ones who misbehave deliciously. Lately young Hollywood is taken with the Beats (Kristen Stewart is shooting Jack Kerouac’s On the Road, the movement’s core novel), who produced literature less good than important. Howl stars James Franco, best known to audiences as Spider-Man’s really pissed-off pal.