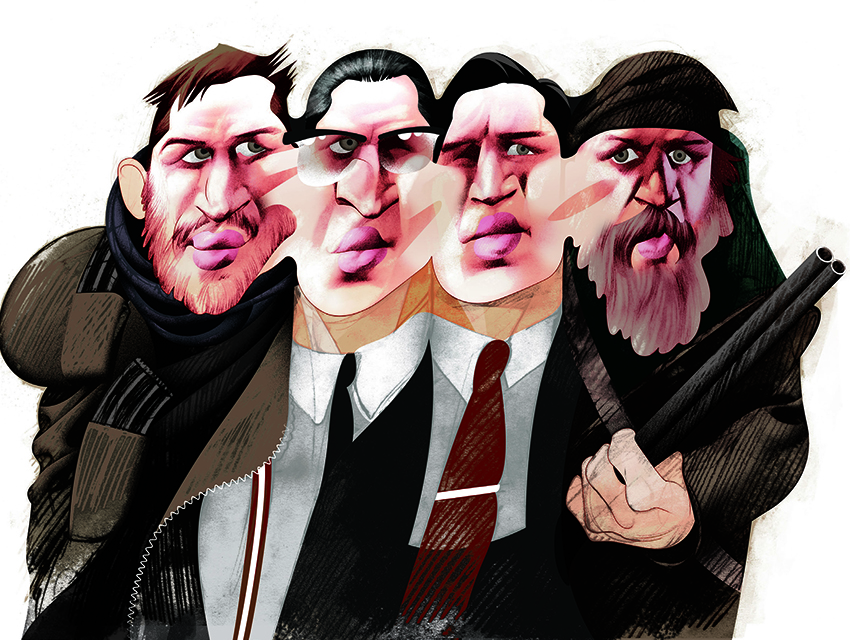 I am not in charge of awarding the Oscars, for which I apologize on behalf of the motion picture academy. I’m also not in charge of the nation’s economy (your lucky day, one percenters), climate change, programming the world’s music (your lucky day, Coldplay), mandating free martinis at Musso & Frank, or curtailing the unacceptable roaming of various Kardashians. What can I say? Life is inexplicable and civilization 1.0 is shortsighted. But be of cheer, for from the kingdom of Ericksonia I bring the good news that Tom Hardy is the actor of the year—an easy call, really. He starred in the year’s best movie, gave not the year’s best but rather two best performances as gangster twins in Legend, and, playing a treacherous trapper in The Revenant, he helped costar Leonardo DiCaprio probably win what passes for real life’s Best Actor Oscar on your pitiful side of reality’s rampart. In his spare time Hardy also played an investigator in Child 44’s Stalinist Russia and a taxi driver in the dark musical London Road, which has yet to be released in the States.

Fifteen years ago, after battling addictions to alcohol and crack and flirting with prison time, Hardy lurked in the background of both HBO’s Band of Brothers and Ridley Scott’s Black Hawk Down as an American soldier. Reaching critical mass less than a decade later, he seemed everywhere, from Christopher Nolan’s Inception to Tinker Tailor Soldier Spy, in which he worked with his idol, Gary Oldman. Because almost as many actors in the last 50 years have been called the new Brando as there have been rock singers called the new Dylan, we’ll just mention that Hardy’s commitment to a role, along with his brooding, inexhaustible conveyance of something primal, might reasonably remind one of, oh, Marlon Brando. In yet another British translation of Wuthering Heights (adapted to film, television, and stage nearly 20 times in the past century), Hardy may be the only actor to fully understand one of the most complex and towering figures in literature, Emily Brontë’s raging Heathcliff, notwithstanding more clueless interpretations by more famous names such as Laurence Olivier.

Directed by L.A. Confidential writer Brian Helgeland and made from the Scorsese mold, Legend is elevated from the routine wholly by Hardy’s performances as Ron and Reggie Kray, 1960s racketeers who became as familiar to Londoners as Mick Jagger and Paul McCartney. Hardy’s Krays aren’t copies of each other but an Id split in two halves, each spinning off not so much in its own direction—the brothers are partners in crime, after all—but at its own number of revolutions per minute. Whether confronting himself in a living room or fighting himself in a pub, or just sitting next to himself in the backseat of a car, staring out his respective window(s), Hardy is so convincing that you forget he isn’t two different actors and still barely believe it once you’ve reminded yourself. Wearing no more of a disguise than a pair of glasses, psychotic Ron can scarcely be recognized as Hardy at all, which is in keeping with the actor’s penchant for unrecognizable roles, from The Revenant ’s Fitzgerald to Bane in The Dark Knight Rises to the early-20th-century Birmingham gang boss Solomons in the excellent English TV series Peaky Blinders.

You would think a tour de force that redeems an otherwise ordinary Legend, as well as the sheer volume of other exemplary work within a 12-month period, all count for something, and you’re right. Unlike the Oscar, the Steverino isn’t bound by capricious apples-versus-oranges assessments or overlapping categories having to do with “leading” and “supporting” performances that are as arbitrary as the awards themselves. Nearly as ubiquitous this year as Hardy, Alicia Vikander was the machina of Ex Machina and the real Danish girl of The Danish Girl, for which nonetheless she’s being promoted as “supporting” actress; Paul Dano plays Brian Wilson in Love & Mercy, a movie that I could swear is about Brian Wilson, though his performance is also classified as “supporting.” Young “supporting” Jacob Tremblay is in and out of Room’s room as much as lead Brie Larson, and Rooney Mara is the central figure of Carol, a story of two women in and out of love, more than anyone in the movie named Carol (Cate Blanchett). At the 11th hour the academy was still trying to figure out which category to put her in. Hardy’s “supporting” role in The Revenant is bigger than his role as Mad Max in a movie called Mad Max, where the lead is Charlize Theron. No matter: He’s on his way to becoming the sort of actor who renders categories irrelevant and makes any role a leading one by virtue of his presence. Our award awaits him at Los Angeles magazine’s offices whatever year he gets around to picking it up. In the meantime, he may have to make do with one of the academy’s.