Home Film States of Being 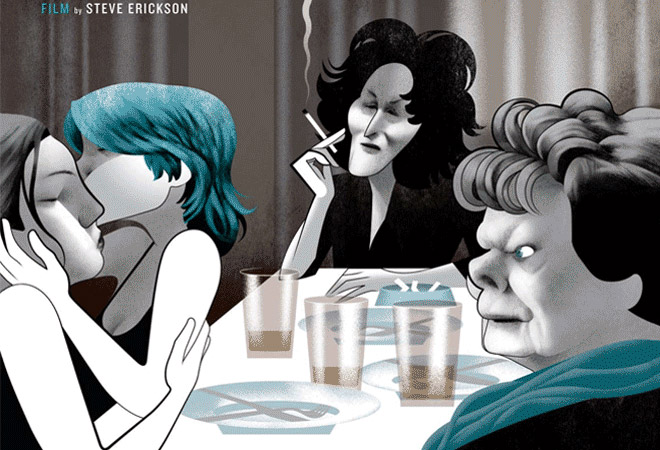 Meryl Streep and Julia Roberts act themselves senseless in August: Osage County, and by the time they’re finished they’ve acted their movie senseless, too. Estranged from her family, Roberts has returned from the big city to her Oklahoma home on the occasion of her poet father’s suicide, bringing with her a simmering fury that’s the only thing she shares with her mother, played by Streep; otherwise the two actresses couldn’t seem less related. When Roberts—her ex having left her for a younger woman—sides not with the mother but with the dead wayward father, apparently it’s a paradox of character too interesting for the story to bother with. Since Oscar season is upon us, and since the play on which the film is based is an entirely ordinary (Pulitzer Prize or no) family drama written earlier and better by Edward Albee, Tennessee Williams, Eugene O’Neill, and Anton Chekhov, August: Osage County functions as an actors’ showcase more than anything else. The supporting roles are stocked with Ewan McGregor, Chris Cooper, Juliette Lewis, Benedict Cumberbatch, Margo Martindale, and Sam Shepard, cast to type in parts they’ve played many times before. Of all the ways in which not a single thing about this movie surprises you, the actors, on whom the movie depends most, surprise you least.

Some people will think Streep is brilliant and some will think she’s awful, but then people are always thinking Streep is brilliant or awful. She’d been brilliant long enough that she became other people’s awful around the time of 1985’s Out of Africa, with reviewer Rex Reed sneering on the radio about how bored everyone was by Streep mastering yet another foreign accent. When Clint Eastwood cast Streep as a romantically restless Italian housewife in The Bridges of Madison County, raising eyebrows among those who questioned why he didn’t cast someone, well, Italian, he reasoned that he wanted the best actress in the world; then, on their first meeting, Eastwood expressed hope she would not be doing one of her accents, and Streep wondered why he wanted her to play an Italian if she wasn’t going to sound like one. The point is that Streep can’t win for losing anymore except on those occasions when she’s winning rather than losing Academy Awards as a tormented Holocaust survivor or a doting British prime minister. Watching her in August as a dying widow whose rage at life is unleashed by drugs and drink, you hold her technique in awe at the same moment you understand that a great performance doesn’t constantly remind you of its technique. Streep has been so consistently memorable in so many varied roles, with three Academy Awards and 17 nominations, that it’s impossible now to forget she’s Meryl Streep, as is more and more the case with her Anglo counterpart and most formidable Oscar competition this year, Judi Dench.

In contrast to Streep, Dench had the luxury of being discovered relatively late by movie audiences to whom she remains a fresher presence with a Shakespearean cachet. Receiving all six of her Academy Award nominations in her seventh and eighth decades, she has been a late bloomer as far as stardom is concerned, out of public consciousness well into the twilight of her career; few filmgoers are aware of the long résumé that put her at the top of several polls as the greatest British actress and got her “damed” (the female equivalent of being knighted) by the time Americans saw her in the mid-1990s as Queen Victoria in Mrs. Brown, Queen Elizabeth in Shakespeare in Love, and James Bond’s commanding officer M in GoldenEye. Even fewer can imagine that half a lifetime ago a younger, vixenish Dench was Cleopatra, or Juliet dying for Romeo, or Sally Bowles on the London stage years before Liza Minnelli appeared in Cabaret.

In the title role of her new movie, Philomena (based on a true story), Dench makes the most of a valedictory quietude that’s unavailable to Streep in August: Osage County. As a woman searching for the son she was forced by nuns to give up for adoption when she was a teenager, the actress may be tapping into real-life regrets about children she didn’t have or adopt, or simply the onset of winter that comes with soon turning 80 and being diagnosed with a degenerative eye condition. In any case, whether due to technique or merely restraint, Dench’s portrait is distinguished by what she successfully sidesteps, including the “aren’t old people cute?” moments screamed for by costar Steve Coogan’s script (written with Jeff Pope). Under the direction of Stephen Frears, Dench has the opportunity to unsettle our expectations, which she achieves by doing less rather than more. A simple woman agog at the routine lavishness of upscale hotels, Philomena displays an unpredictable insight just when we and the condescending characters around her are about to consign her to ignorance and unworldliness.

The year’s finest actress has the advantage of being called neither Dench nor Streep and therefore not having to live up to either. Her name is Adèle Exarchopoulos or Léa Seydoux, each playing the other’s lover in the French film Blue Is the Warmest Color, based on a graphic novel; trying to choose between the two misses the point. Theirs is a performance in tandem: Exarchopoulos is a high school student discovering her attraction to her own gender and falling in love with the experienced and mature Seydoux, a painter comfortable in her own skin and sufficiently beguiling to make a straight man wish he was a woman. Routine though it is on its face, Blue Is the Warmest Color’s drama doesn’t always unfold as we anticipate—we can see the usual betrayal coming in the affair but not at whose hands—and the women make it singular anyhow; to paraphrase Tolstoy, lovers are happy in the same way but unhappy in their own way, particularly when one is mentor to the other and the only way to cross chasms of age and ambition is erotically. If the most explicit lesbian sex in any mainstream movie ever stops the movie in its tracks a couple of times, it also informs the intensity of the relationship and leaves the actresses exposed in more respects than one.

Obviously Streep, Roberts, and Dench long ago lost the capability to give such performances. This is what stardom takes away—the blank slate on which Exarchopoulos in particular (only 18 when she made Blue) and Seydoux can write before it fills up with the information of their public personae, until four decades from now a 115-year-old Rex Reed is snarking about Exarchopoulos mastering yet another hot lesbian sex scene. Neither woman gives any indication at this point of possessing Streep’s technique or Dench’s; their inner journeys aren’t that inner, their desires and vulnerabilities still close enough to the surface for the actresses to feel like “prostitutes,” in Seydoux’s word, when exploited by a director who believes it’s not only his job but his privilege to exploit them. If this raises the question of how much Exarchopoulos and Seydoux are performing as opposed to being, the revolution of modern acting since Brando (who would tape his lines on the set to read so they didn’t sound like they were memorized) has been to eliminate the distinction altogether. Fought on the landscape of blank slates, such revolutions belong to the young, who don’t always know the stakes and have no sense of the cost until it’s paid.

Dame Judi Has Some Fun at the Britannia Awards