Home Nightlife Searching for Meaning in a TV Landscape Without the Wit and Wisdom... 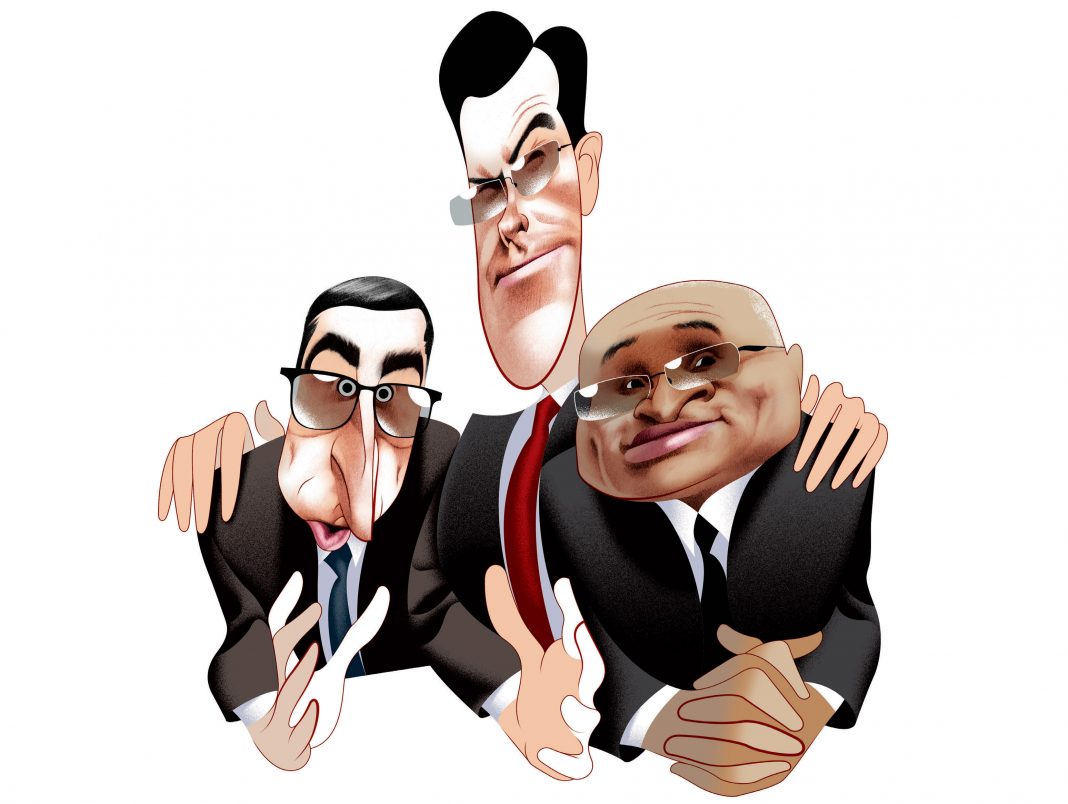 At dinner this past February, as some friends were lightly mocking those among the television public who took hard the then-breaking news of Jon Stewart’s impending retirement, I slunk into my seat in cowardly silence, one of the distraught mourners. In these unhinged times—and I’ve lived long enough to know the current derangement is exceptional—I sometimes feel as if Stewart is the only thing keeping me sane. Exactly because the late-night Daily Show was intended as a faux news report when Stewart took over almost 17 years ago, its growing reliability has become especially startling. More than a particular point of view, which he certainly has, Stewart possesses an acute eye and ear—for hypocrisy, bad faith, and intellectual dishonesty—that steadfastly trump ideology, including, now and then, his own and his audience’s; if protégé and heir apparent Stephen Colbert became funnier, with his comedic superstardom burning a bit more brightly, Stewart remained the one who facilely marshaled reason, information, and satire into arguments more devastating (not to mention entertaining) than any editorial or polemic. Back in the 1940s, protest-folksinger Woody Guthrie had a guitar that read THIS MACHINE KILLS FASCISTS. Stewart should have tattooed on his forehead THIS MIND KILLS STUPIDITY, or at least any within earshot of his mouth. Regularly eviscerated Fox News is positively giddy he’s going, but CNN must be just as pleased, because as Stewart picks apart Fox’s willful blitzkrieg on fact-based reality, he lances the empty pomposity of a news network that’s neutral about everything except its own breathless self-interest.

Late-night is in a shambles now, though it may turn out to be constructive chaos. Next month Colbert replaces David Letterman, who was, three decades ago when he made his mark on a national audience, the closest thing that late-night had to Stewart; Letterman anticipated Stewart’s complicated relationship with human absurdity, made up of part hostility to the social havoc it wreaks and part affection for the great material it provides. CBS’s selection of Colbert to take Letterman’s place this fall has a kind of logic at odds with itself, because Colbert’s following is based on a persona he created and must abandon in order to fulfill a role in keeping with the demands of Letterman’s show; in other words, we might not recognize someone we’ve been watching for a decade. Meanwhile, of course, Colbert’s slot following Stewart has been taken over by The Nightly Show’s Larry Wilmore, and another Stewart alumnus, John Oliver—an accomplished fill-in for Stewart two summers ago—has his own weekend late-night show on HBO called Last Week Tonight. What all of Stewart’s inheritors have in common with Stewart and one another is their true target: the news media itself.

Both Oliver’s Last Week and Wilmore’s Nightly are works in progress that nonetheless have earned our patience. British-exported Oliver has Stewart’s informed smarts and also a penchant for the goofy that doesn’t undermine the seriousness of his comedic point; after distilling into the opening five minutes the scattershot review of the news we get from Stewart, the rest of the half hour can be turned over to a single subject as wonky as school testing. Oliver realizes this isn’t sexy even to newshounds, but in his passion for the issues and in his indignation, which seethes barely below the surface, he thinks it warrants challenging the audience anyway: You need to know this, he’s telling us, always making a pretty good case for why. To many, Oliver has come to resemble a scathing investigative journalist as much as a comedian, which says something about both Oliver and the current state of journalism; Oliver has scoffed at this notion. But easily the high point of Last Week’s first two seasons came this past spring, when he flew to Moscow to interview exiled NSA whistle-blower Edward Snowden with no ironclad conviction that Snowden would show up—which, for more than an hour past the designated rendezvous, he didn’t. Though Oliver rightly could be perceived as sympathizing with Snowden’s overarching argument as it has to do with the government’s surveillance of its citizens, he proceeded to more relentlessly interrogate Snowden than anyone could have expected, including Snowden, all while being funny.

The only one more deftly negotiating so many contradictions is Wilmore, whose function on Stewart’s show as the “senior black correspondent,” speaking for and to all things African American, became its own joke. Buffeted by uneven writing, The Nightly Show hasn’t found its format yet; the last half involves three or four ever-changing panelists comprising serious people trying too hard to be funny and funny people who are out of their depth, which results in a strange competition that’s only intermittently entertaining and rarely informative, in contrast with, say, the similar setup on Real Time with Bill Maher. The occasions when the panel works are conspicuous: women talking about whether a Hillary Clinton presidency would be more effective because she’s postmenopausal, or Bill Nye the Science Guy explaining in terms of ultraviolet light why some people have darker skin and some lighter. To the extent that The Nightly Show succeeds, it’s as a triumph of personality, which is to say Wilmore’s. Pointed without being enraged, affable without being banal, black without his identity being consumed by it, Wilmore appears at ease with any audience of any color without betraying himself in the process. Having the equanimity and humor to sometimes lampoon his own black consciousness (or what he calls “all my blackety-black-black stuff”), he calls out white news reporters for confusing—in they-all-look-alike fashion—former Def Jam Recordings president Kevin Liles with Def Jam founder Russell Simmons, only to note that Liles and Simmons do, in fact, look a bit alike. Wilmore’s sit-down in a diner with gang leaders during the recent Baltimore turmoil was nearly as unprecedented as Oliver’s with Snowden. If Wilmore and the The Nightly Show survive, they could prove quietly revolutionary.

I’ll more than make do with Wilmore and Oliver, but I’m not sure either of them can keep me from going crazy like Stewart does. I doubt, for that matter, that any of them expect to. Presumably Stewart decided his show was becoming as tired as he feels; reportedly the prospect of another presidential election, after covering four of them, enervated rather than energized him. So of course no sooner did he make his retirement announcement and set the August 6 date than he regained his satiric mojo, as well as sometimes a j’accuse fury that struggles for civility, as in the case of his interview with former New York Times journalist Judith Miller, whose 2002 and 2003 “reports” helped sell an administration’s bill of goods on the Iraq War (it should be noted that Miller comported herself with Stewart fairly well). For that matter, Stewart may have second thoughts about the coming election, which is shaping up as not only potentially historic, with a better-than-even chance that the next president will be a woman, but the most crackers of all, with an ever-expanding down-the-rabbit’s-hole array of contenders too stupefying to explain to my ten-year-old. Like Walter Cronkite at the ground zero of preadolescent incredulity, Stewart has been the most trusted man in news for Nuts Nation. For this silent dinner companion, a future of barely functional madness beckons.

What to Stream This Weekend: ‘Space Force,’ ‘jeen-yuhs’