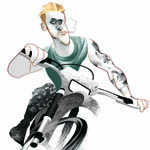 The Place Beyond the Pines, the lives of two men—stunt motorcyclist Ryan Gosling and rookie cop Bradley Cooper—intersect only twice, once at gunpoint and again, 15 years later, by way of troubled sons. In The Company You Keep, aging ex-radical Robert Redford is driven to protect one daughter from his past and to reclaim, within the past’s mysteries, another daughter. The ties that bind fathers and their children are the casualty of both movies; because children are our emissaries to futures we’ll never know, everything is at stake for these men even when they’re attempting to protect their children from whatever those stakes are, and even when it means sidelining the children from the fathers’ lives altogether. The children are the catalytic figures in these narratives even when the narratives try not to be about them.

After Eva Mendes walks into Gosling’s tent one night following his daredevil heroics with a traveling carnival, he learns he has a baby from an encounter apparently fleeting enough that Mendes can’t be sure he remembers her name. A hard case and disinclined to stick around anywhere for long, with no father of his own to block out the sun let alone cast a shadow, Gosling nonetheless finds himself not fleeing responsibility but intending to embrace it—though Mendes wants nothing from him and though the embrace becomes dangerous and then lethal. Gosling begins robbing banks to support his son, and The Place Beyond the Pines unfolds with a sense of fate so unforgiving that what might be a glib resolution two and a half hours later instead feels inevitable. As in a noir film, lives hinge on turns of fortune that in and of themselves are banal: a knock on the door that reveals a baby’s existence, a flat tire that thwarts a getaway, crossed paths in a high school cafeteria. Only later does it become clear that these matters of chance might not have been chance at all, that they’re the seemingly minor but crucial digits in fate’s calculus, to which a single conclusion is possible.

One of the virtues of The Place Beyond the Pines is that until the last 20 minutes or so, you don’t know where it’s going, which renders virtually everything I say a plot spoiler. Director and cowriter Derek Cianfrance sets up his audience to believe this will be a crime movie wherein Gosling, as in past films, summons the spirit of Steve McQueen, and Cooper, who doesn’t appear till almost halfway into the story, tries to step outside his movie star presence into a more earthbound role. When the two men finally meet, the audience’s expectations are at once satisfied and then jettisoned; suffice it to say that the film turns out to be about neither Gosling nor Cooper and resembles less a modern noir than a well-observed survey of damaged people colliding with one another, something that also marked Cianfrance’s previous feature, Blue Valentine. Whereas Valentine’s collision between Gosling and Michelle Williams was contained within the physical and emotional parameters of their relationship as a couple—their desire for and dread of each other—and whereas the point of Valentine was its claustrophobia, The Place Beyond the Pines has the dimensions of a small epic unraveling across generations that never venture beyond Schenectady (which is the Mohawk word for the movie’s title). Only in the final moments does one of the characters break free, on the run, another fatherless son on another motorcycle, his destiny having converged with the legacy he never knew.

Half an hour into The Company You Keep, Robert Redford is on the run, too, alleged to have committed murder as a member of the Vietnam-era revolutionaries the Weather Underground. Racing into his insurrectionist past—which is populated by onetime compatriots for whom he’s the last person they want to see—pursued by cops who don’t go to the movies and are unfamiliar with how suspects set off fire alarms in hotels to create confusion, he hopes to clear his name as well as the memory of him that, soon enough, he knows will be all that’s left to his young daughter. The Company You Keep is about outgrowing not just the delusions that accompany youth but the harsh certainties driving our lives and then trapping them, before the years outpace the velocity of our dreams. Soon, however, the anguish at the movie’s core, about a movement and a country’s broken promise, is as much personified by Redford’s old lover, played by Julie Christie, a narcissist who regards motherhood as a bourgeois luxury and has convinced herself that she did her own forsaken daughter a favor when she left.

Redford always has been a cool presence both before and behind the camera. His best movie as a filmmaker, 1994’s Quiz Show, exhibits a classicism verging on self-repression, and the social indignation in many of his films engages more than moves you. Whether Redford distrusts volcanic emotion or just isn’t wired for it probably doesn’t matter; from the beginning of his career he’s given the impression of someone who hasn’t had to try too hard. He won the Academy Award for the first movie he ever directed, Ordinary People, and as director Mike Nichols has recounted, he rejected Redford for the lead of The Graduate because the spectacularly good-looking young actor had no sense of what it was like not to get the girl. This detachment has been part of the star’s allure and also the reason he’s unconvincing as, say, the unrequitedly obsessed hero in 1974’s The Great Gatsby, with even the elusive Daisy Buchanan being a girl Redford could get. That Redford has been sincere over the course of his career about the political passions expressed in his films is proved not by the intensity of those passions but by their ubiquity. He’s returned to them again and again as star and director, from The Candidate and All the President’s Men in the ’70s to, more than three decades later, The Company You Keep, where the politics remain so thematically unfulfilled that you can’t help suspecting a failure of nerve, or maybe a late calculation to deliver the themes by way of a more audience-friendly vehicle.

If The Company You Keep has little tension as a thriller, Redford might plausibly argue that it really isn’t one, in the same manner The Place Beyond the Pines is a crime picture that really isn’t one. Less conspicuous and therefore more startling is the extent to which, in addition to politics, the theme of estranged sons and daughters emerges in Redford’s movies, too, including A River Runs Through It and The Horse Whisperer as well as Ordinary People and Quiz Show. The Company You Keep would like to be a philosophical film of ideas about the America we prepare to leave our kids, which we hope is better than the America of the revolutionary ’70s even as the country’s disparity of opportunity has become worse than now-obsolete radicals could have imagined. Given Redford’s reserve, it’s hard to be sure which of his movies matters more to him personally, but if The Company You Keep is one of them, then it’s for how the two themes intertwine—a reflection on not only what distinguishes radical means from progressive ends, but on the difference between the extremism that romanticizes our lives and the wisdom that redeems our children’s.