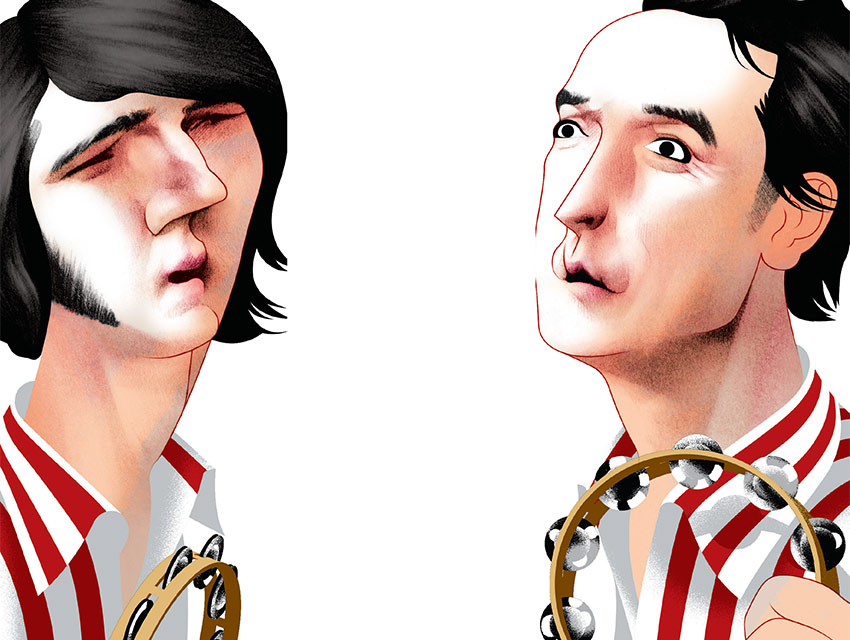 When I was a teenager and Jimi Hendrix sang, “And you never hear surf music again,” he was talking to me. A product of Southern California—hang-ten capital of any coast east of Honolulu—I was keenly aware of how surf culture represented everything from which I felt omitted, including the social circle of kids in T-Birds that Daddy never took away; someone with a better command of sexual math got my two girls that Jan and Dean’s 1963 “Surf City” promised to every boy. “Surf City” was written and produced by 20-year-old Brian Wilson of Hawthorne, California, and might have been surf’s manifesto but for “Surfin’ U.S.A.,” “Surfin’ Safari,” “Surfer Girl,” “Surfers Rule,” “Surfer’s Ride,” and “The Surfer Moon,” not to mention plain old “Surfin’, ” all written by Wilson and recorded by his cohorts, the Beach Boys. In their matching candy-stripe shirts, the Beach Boys were America’s biggest band of the early ’60s, transmitting utopian bulletins of summer without end to a cold and overcast nation. Possibly excepting Phil Spector, Wilson was the prince of SoCal music until deposed by the groovier likes of the Byrds, Love, the Mamas and the Papas, the Seeds, Buffalo Springfield, and the Doors; one of the many ironies of Brian Wilson was that, even in his dominance, he wasn’t cool.

Another irony is that Wilson wasn’t getting his two girls either and wouldn’t have been sure what to do with them anyway. Emotionally scarred and abused by his father—a blow to the head allegedly left him as deaf in one ear as Beethoven—Wilson no more wrote of his reality than he did of mine; he wouldn’t have been caught dead on a surfboard. Wilson’s music was a prayer, not reportage. His chiming fantasias were havens, until even he couldn’t believe them, at which point his imagination retreated into its own recesses: Within months of “Surf City,” Wilson’s compositions had more claustrophobic titles like “In My Room,” and several years later a song called “Surf’s Up” wasn’t about surfing at all. What deficiencies Wilson suffered as a hipster were compensated for by genius, a word applied to him more routinely than to anyone this side of Ray Charles. In part this was because his head was full of sounds from the spheres that recording technology could barely translate; in part it was because Wilson fulfilled the popular perception of a disturbed genius. During a fabled crack-up, he took a tsunami of LSD bigger than any surfer could ride, turned his house into a giant sandbox, and didn’t leave his bed for three years.

The inexplicable contradiction distinguishing Wilson’s art is that its sensibility is so naive, while its sophistication verges on unearthly. His songs are innocent beyond his capacity to express with words, which occasionally have been provided by other lyricists, yet in the same way that guitarists still try to figure out how Hendrix got certain reverberations from his instrument, composers still try to decode Wilson’s ability to combine four chords like nobody else. In the last half century the gift for pure melody evidenced by “Don’t Worry, Baby,” “Lonely Sea,” “ ’Til I Die,” and “Good Vibrations” is challenged only by Paul McCartney, for whom Wilson has been a hero since 1966’s “God Only Knows.” This bipolarity, as well as the nervous breakdown at 25 that cleaved his life in two, lends logic to the dual casting of John Cusack and Paul Dano in Love & Mercy, the Brian Wilson biopic directed by Tree of Life producer Bill Pohlad. Love & Mercy flashes back and forth between the older and the younger Wilson, in search of a narrative cohesion that replicates his psychic rupture in a lifetime of betrayal by everyone from his father to his father-figure psychotherapist (played by an admirably loathsome Paul Giamatti). This treachery also included the band—a family affair, it should be mentioned, comprising two brothers and a cousin—that couldn’t comprehend why Wilson was no longer writing the surf songs that had brought them so much success. Then the celestial sounds in his head turned on him, too, and became the screams of angels falling from heaven.

So however audaciously structured and smartly written Love & Mercy is, inevitably it triumphs by virtue of its leads, who reportedly were kept separated during production to better capture an identity at odds with itself. Hollywood’s most interesting actor in the 1990s and early 2000s when he made (and in a couple of cases cowrote) The Grifters, Grosse Pointe Blank, Being John Malko-vich, High Fidelity, and Max, Cusack was subsequently sidetracked by 2012, Must Love Dogs, and Hot Tub Time Machine; with last year’s Maps to the Stars and now this, he’s returned to more daring form. Looking almost nothing like Wilson, Cusack is left to convey an aging man-child from the fractured ego out. Hiding in plain sight from the world while trying to locate a personality among his past accomplishments, he wavers between stunted adolescence and emotional catatonia, wandering his own inner labyrinth: “Lonely/scared/frightened” reads the note he leaves for the woman he’s just met who will become his wife. But it’s as the younger Wilson that Dano steals Love & Mercy, lurching from rages of inspiration to the onset of full-blown psychosis before his sense of creative mission collapses entirely. The scenes of an assured and possessed maestro leading amused and bewildered L.A. session players through the recording of perennial greatest-album-ever contender Pet Sounds—instructing a stupefied veteran to play two bass lines in different keys throughout the same song—are the film’s most quietly thrilling. “That was a mistake,” protests one musician when asked to reiterate an errant clatter, to which Wilson answers, “If you repeat a mistake every four bars, it’s not a mistake anymore.”

“You’re a talented young man,” legendary drummer Hal Blaine (played by Johnny Sneed) concedes, a professional’s understatement mitigated by a faintly discernible awe. If I had to grow up in order to appreciate Brian Wilson, arguably it’s taken Wilson himself longer; in time for Love & Mercy he has released a CD that concludes with “The Last Song,” ostensibly a good-bye to his old band but suggesting to the rest of us a farewell more final (“If there was just another chance for me to sing to you”) in a 73-year-old voice that’s aged at last. The years may have rendered the Beach Boys a nostalgia act, but Wilson transcends nostalgia—influencing music that would seem to be his anti-thesis, from the Velvet Underground in the late ’60s to the Ramones in the ’70s to the Jesus and Mary Chain in the ’80s to Radiohead in the ’90s to Animal Collective in the ’00s—even as “The Warmth of the Sun” and the sublime “Caroline, No” are about nothing if not being haunted by the losses that life refuses to forget. Great artists create in circles, not lines, in the ever-bending curl of the wave rather than in its rush to the shore’s conclusion.

Kip Boardman is all About That Smooth ’70s L.A. Sound