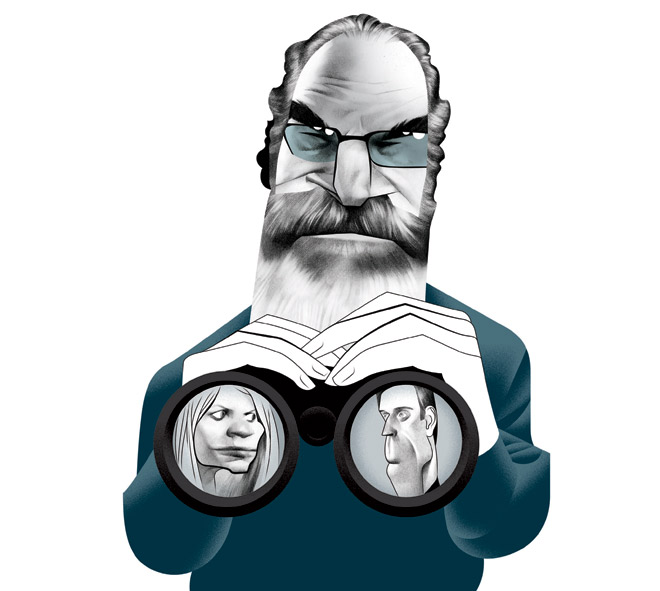 As the third season of Homeland begins this month, those who followed the first two won’t need to be reminded where they left off. A terrorist attack close to the center of action has not only dispatched as many important characters as a Game of Thrones wedding but blown up assumptions about the story we already suspected were too neat; if we’ve learned anything about this show, it’s that Homeland doesn’t do neat. On the other hand, TV viewers who haven’t seen the most talked-about series of the last several years will need to catch up because, more than with any show since Lost, there’s no jumping in midway. I can tell you that an American prisoner of war, played by Damian Lewis, was found alive in Iraq after eight years of being presumed dead and that from the get-go the CIA operative portrayed by Claire Danes concluded (rightly) he was an Al Qaeda Candidate, brainwashed—like Laurence Harvey in the 1962 thriller The Manchurian Candidate—and sent back to set in motion an attack. This gets you two or three hours in. I can add that, as surely happens with all terrorists and spies, Lewis and Danes have fallen in love in spite of his marriage, her marching orders, and the lovers’ mutual suspicion of each other, which they fully justify whenever they aren’t having hot sex. This takes you to about halfway through season one. Finally, without spoiling the rest, I’ll point out that it’s in the nature of such TV dramas to grow more preposterous rather than less, and if creators Howard Gordon and Alex Gansa, who developed the Showtime project from an Israeli-TV counterpart (which in turn was modeled on the first American post-9/11 hit, 24), aren’t making this up as they go along, they have even more to answer for.

Homeland was a sensation out of the gate in 2011, gathering acclaim and sweeping up Emmys, and the reason such shows are so overrated is because, unlike with other forms of popular art, success in TV is measured almost purely by how obsessive we become. A series like Homeland is necessarily open-ended since the idea behind television is to spend as much time as possible resolving as little as possible, with a story’s usual need for resolution replaced by an unrelenting urgency that always defers answers and constantly postpones closure. If pop music is the medium that’s comparably visceral, a song finishes nonetheless, allowing us to assess the entirety of its four-minute trajectory, whereas what counts in TV is how long and effectively we can be jerked around. If the premise is intriguing enough and the execution expert enough, whole seasons may pass (three, say) before we begin wondering what it’s all about or whether it matters.

Cliff-hanging and page-turning (or whatever gets you to turn the page) are time-honored storytelling traditions going back at least as far as 19th-century novels if not 16th-century Elizabethan productions that began in the afternoon and ran into the evening. But if Charles Dickens didn’t know all along—over the course of a couple of years and 19 installments—that Amy Dorrit was actually an heiress and bound to marry Arthur, he was an even better writer than we realized; and though anything’s possible for a world genius, Shakespeare probably didn’t kill off half the major characters in the final scenes of Hamlet because he ran out of ink. A show like Mad Men doesn’t last six seasons just by stoking our compulsiveness but by offering an emerging view of evolving American values in the 1960s, and in the course of indulging your Battlestar Galactica mania, you got a haunting meditation on what it means to be human. For some series the artistic stakes, if we can be grand about it, are such that their creators are willing to challenge their viewers’ obsessions, practically daring their audiences to leave: At least twice during its run, as Breaking Bad became less and less compromising in its moral complexity, I wondered whether I would be able to watch the show anymore. (I was.)

Homeland is nothing if not addictive, as someone with better things to do like the president of the United States can attest. I’ve gotten myself hooked on the series twice now, staying up till one in the morning as I plowed my way through; but once the binge was over, little about the show stayed with me or lured me back. A DVD set in reasonably good condition might still be found in the used section at Amoeba if you hurry. While the espionage setting lends a convenient hall-of-mirrors conceit on which the writers can fall back, in its second season Homeland jumped enough sharks to start a new Jaws franchise (if Dick Cheney’s heart missed a beat watching the scenario regarding a vice president’s pacemaker, it probably was more from mirth than alarm); and what used to be the series’ most notable asset, Claire Danes, morphed into its biggest problem. The premise’s mother of all twists is that between the two lover-adversaries, Lewis’s tortured/brainwashed/suicidal assassin is the stable one, while Danes’s bipolar CIA officer is half an eye twitch away from the crazier side of berserk; if her eyes pop out of her head any farther, she’ll become a Tex Avery character. On a weekly basis during season two she did something so spectacularly ill considered as to flirt with plain loony, and the fact that it was often for the purpose of liberating an otherwise cornered plotline—as when in Lebanon she jeopardized the lives of her entire company in order to race back into an apartment and retrieve what turned out to be the telltale memory card that would vindicate her—simply appears that much more opportunistic on the part of a narrative that’s already exhausted the patience of at least one cranky viewer.

Condemning art as manipulative is a non sequitur, of course. All art is manipulative. But in five seasons of the Baltimore cop show The Wire, I don’t remember once feeling manipulated because as in any great, even open-ended, opus the characters took on lives of their own, declaring independence from their creators by the sheer force of the conviction that created them, and because there was a sense of something at stake and that the manipulation was on behalf of something more than keeping an audience coming back. I’m not sure I’ll watch the third season of Homeland. If I do, it’s because Mandy Patinkin, as Danes’s supervisor, mentor, and father figure, has a kind of integrity that has steadily made him the show’s gravity and soul while also seeming like he’s in a whole other show of his own, or should be. Homeland might be well advised to let Lewis vanish in the wilds of Canada for good, put Danes back on her meds and behind a desk where she can stop annoying us, and allow Patinkin to take over. When we last saw him in season two’s closing moments, praying aloud amid the rubble of what had just happened, his face a war zone between despair and grace, he had found himself hurled by events from a quasi-renegade status in which his career was on the verge of implosion to an abrupt, violence-wrought position of leadership that was unfathomable 30 minutes before. But then everything that happens in Homeland is unfathomable 30 minutes before. In Homeland’s desperation to keep ginning up the topsy-turvy, even money says Patinkin winds up being Osama bin Laden’s revenge-crazed half-brother for whom everything that’s happened is part of a plan. Let me know three years from now what happens. Or don’t.