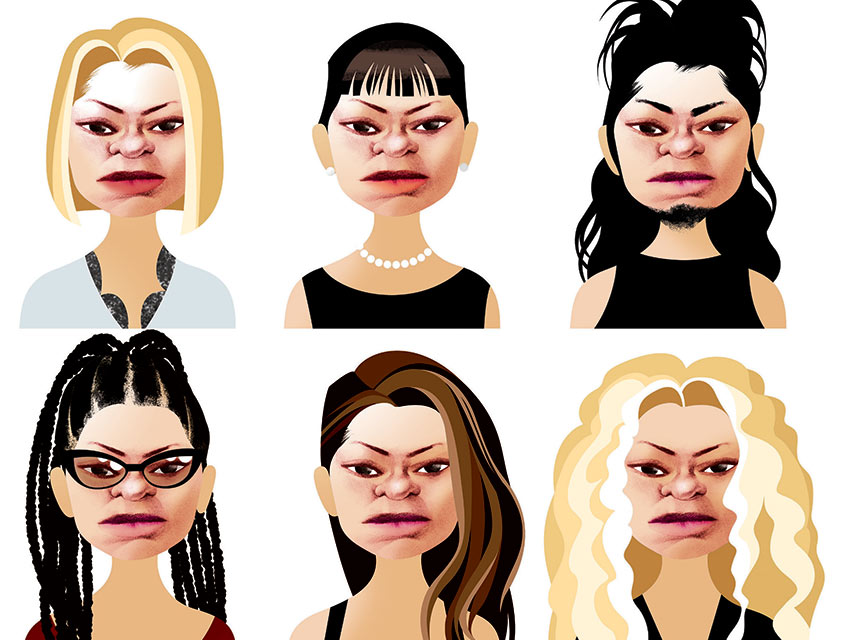 On Orphan Black Maslany plays a succession of clones so dizzying that no one can keep track of them. I come up with seven, but some Web sites insist on nine, while still others claim a dozen. Sarah, Cosima, and Alison etcetera are desperately trying to get to the bottom of…well, something, with a lot of other folks running around trying to kill them or capitalize on them; trying is the operative word here in all its definitions. The show suffers from what might be called Fugitive Syndrome, hereby named after a ’60s drama about a man on the run from the law, accused of a crime he didn’t commit and hunting down the culprit who did—at which point there was no more basis for a series. Classic programs Twin Peaks, The X-Files, and Lost all have been similarly undone, sustaining themselves from episode to episode and from season to season by never resolving anything, tension giving way to tedium until finally the audience understands it’s in a loop that ends only when the show goes off the air. But Maslany is a marvel. Aided by a body double who stands in for whichever clone the star isn’t playing in a given scene, the performance is such a tour de force that its omission from the last couple of Emmys has become something of a scandal, raising questions about a long-standing bias against science fiction by the TV academy when it comes to major prizes.

A decade ago at a Mexican joint in Santa Monica, I had dinner with the editor of a well-known publishing house who was agonizing over whether to reissue a selection of novels by Philip K. Dick. Some would have considered this a no-brainer, but the editor moaned into his margarita that he didn’t “get” Dick, by which he meant that Dick couldn’t overcome his innate limitations as an author of science fiction. In the culture at large, the war over science fiction’s creative validity has been long since won, but guardians at the gates of literature, movies, and TV linger unconvinced even as other genres fitfully transcend critical perceptions of insubstantiality. Westerns, thrillers, war pictures, crime sagas, musicals, and science fiction’s not-so-distant cousin fantasy have won a collective 29 best-picture Academy Awards to science fiction’s zero, while noir bypassed respectability altogether to attain intellectual chic, its sexuality and core highbrow existentialism distinguishing it as a genre for grown-ups. Since H.G. Wells, science fiction has been viewed (not always incorrectly) as a drama of ideas rather than of human conflict, and since Jules Verne its audience is presumed (also not always incorrectly) to be adolescent boys.

Dick, it might be noted, had his own ambivalent feelings about science fiction. He saw his work as bifurcated between the genre paperbacks he knocked out to make a living and the stranger, less classifiable novels closer to his heart that bookended his life’s work. In fact all of Dick’s fiction—both the science fiction pulps like 1969’s Ubik and titles like 1982’s The Transmigration of Timothy Archer that fit no prescribed niche—shared the same preoccupations with the nature of reality and the nature of humanity (not to mention the nature of God); spaceships were no more interesting to the author than the local bus line. The most popular science fiction entertainment of all time, Star Wars, didn’t exactly make the case for the genre’s adult potential. It fetishized everything that’s juvenile about science fiction, desexualizing intergalactic princesses and rendering alien life-forms fuzzy or goofy enough to be marketed as toys. Too monumentally popular to be entirely overlooked by the Oscars, Star Wars got the best-picture nomination that the cosmic, even theological 2001: A Space Odyssey, now widely considered one of the greatest movies ever made, and Blade Runner, based on a Dick novel and arguably the most influential picture of the last 35 years, did not; at some point neither the Oscars nor the Emmys can quarrel with phenomena or the audience. More as consolation prizes or valedictory gestures, television’s Star Trek and Star Trek: The Next Generation were tossed best-drama nominations only when it became clear their days were numbered, something one vainly hoped for in the case of Battlestar Galactica, as good as anything else on TV. Both intellectually and emotionally challenging, concerned with ideas and human conflict but without the clout that HBO routinely marshals on behalf of inferior fantasies True Blood and Game of Thrones, Battlestar was ignored by the Emmys.

Orphan Black is too manic verging on incomprehensible to be in the same league as Battlestar Galactica, let alone 2001 or Blade Runner. If anything, Maslany (who also can be seen as the younger Helen Mirren in Woman in Gold ) is all the more impressive for it. Imparting to the show what personality it has beyond its own convolutions, she isn’t giving a science fiction performance—in the way that it could be suggested the late Leonard Nimoy did, so endearingly, as the Vulcan Spock in Star Trek—but one determinedly down-to-earth, first as a scrappy nomad aimlessly riding the subway until she discovers a second version of herself, which leads to a third and a fourth, the actress giving half a dozen-plus performances that are at once variations on the prototype while remaining different. In the first season, two or three episodes passed before I realized one of the clones was a clone at all and that Maslany was playing her, and the moment I knew the actress was doing something I hadn’t seen before was halfway through the season when she portrayed one clone impersonating another. You could watch the wheels of the masquerade as they turned, two personalities at work in a single body, which is to say an initial persona cloning the next. As acting goes, this may be its own kind of science fiction, a one-woman voyage through and beyond all the outer rings of Psyche and Id and their various moons. Back on Earth, Emmy judges should power up their telescopes.

The Adaptation of J.G. Ballard’s High-Rise Challenges the Notion of What’s “Unfilmable”

Your Guide to Holiday Binge Watching

Bloody Hell: An Oral History of the Making of ‘Blade Runner’