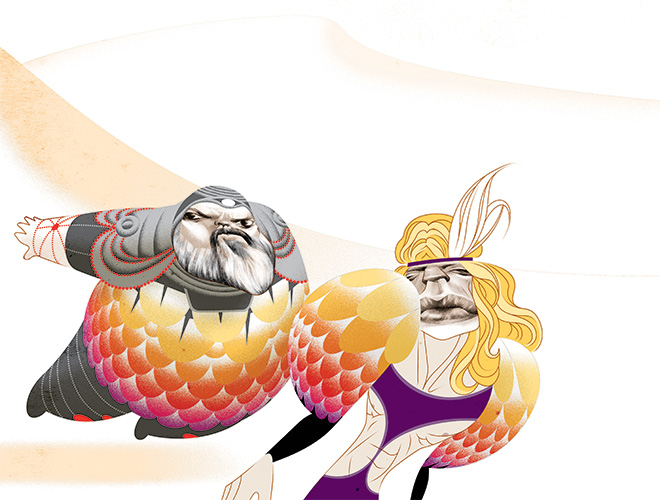 Alejandro Jodorowsky is one of the supreme nut jobs in movie history, and of course I mean that in the nicest way. A Chilean Jew based variously in Europe and Mexico City, the mystic-anarchist dandy was a mime, carnival performer, stage actor, and comic-book author before he began making movies in his thirties. His breakthrough western, 1970’s El Topo, was the story of a gunfighter pursuing the Apocalypse’s Four Horsemen while encountering along the way haunted towns, homicidal quadriplegics, and lascivious dwarves; you have to take my word that this is barely a tenth of it. Shocking at once the civilized society that subsequently saw fit to suppress the picture and the hippie audiences who saw the same cultural outrage as grounds for embracing it, El Topo picked upwhere Sergio Leone’s psychedelicized Once Upon a Time in the West left off. John Lennon was impressed enough to finance Jodorowsky’s even more assaultive and berserk follow-up, The Holy Mountain, replete with crucified animals, reptile circuses, naked nuns, feces alchemized into gold, decapitations that came close to actually happening, and at least one nude bathing scene more intimate than you want to know, which led George Harrison, cast in the lead because he looked like Jesus, to drop out. When Jodorowsky decided to adapt 1965’s Dune, the biggest-selling science-fiction novel up until that time—remarkable given that any reasonable reader finds it incomprehensible—he hadn’t read it. When he did read it, he found it incomprehensible as well, which to someone as unreasonable as Jodorowsky represented an opportunity; he wasn’t shy, then or four decades later in the new documentary Jodorowsky’s Dune, about his intentions: to make Frank Herbert’s story of a desert planet, where water is so scarce that people’s tears are at a premium, the most spectacular movie of all time. The exuberant director, now 85, never saw the point of a “modest” movie—he disowned the one or two that followed—or a modest anything, and with a budget of $15 million, a considerable sum in the early ’70s, he assembled a cast and crew whose hipness quotient was combustible on the scale of colliding planets. Counted among their ranks were Mick Jagger (front man for the “world’s greatest rock and roll band” at a time when no one disputed the claim), Orson Welles (lured to the venture with the promise that his favorite chef would be on hand at all times), gender-ambiguous model Amanda Lear (then starring on the cover of Roxy Music’s second album), David Carradine (then starring in the TV cult hit Kung Fu and subsequently a Quentin Tarantino favorite), French illustrator Moebius (making his mark in the adult sci-fi comic Heavy Metal), Swiss fetishist-artist H.R. Giger (who hadn’t worked on a feature before and wasn’t yet known for his production design in Alien), Pink Floyd (on the verge of enormous success with The Dark Side of the Moon’s release), and painter Salvador Dalí (who insisted on being paid $100,000 an hour, with Jodorowsky therefore resolving to shoot the Spanish surrealist for exactly one hour and use stand-ins for the rest of his scenes). In retrospect it seems obvious this could have only been too much of a good thing. But when no major studio would finance the endeavor and it fell apart after two years (18 months before the unexpected phenomenon of Star Wars and the ensuing vogue for science fiction), the effort left behind two things: a colossal 3,000-frame storyboard (characterized as the “size of a phone book” by Herbert), which elaborately charted the picture from beginning to end, and a legend as the greatest movie never made. Jodorowsky’s version of Dune plays around the clock in the multiplex at the center of cinema’s alternate universe—brought to you by your imagination—and Frank Pavich’s documentary is a testament to what a precarious business moviemaking can be, where talent, ambition, and ferocious commitment are steamrolled by executive judgment and a shortsightedness that grows in direct proportion to the demands of money. At that same parallel cineplex screens Don Quixote, Welles’s dream project until the end of his life; Stanley Kubrick’s failed biopic of Napoleon, written and extensively prepared before the whole undertaking collapsed into regret and plan B (A Clockwork Orange); and David Lean’s adaptation of Joseph Conrad’s Nostromo, not only scripted with Peter O’Toole and Isabella Rossellini on board but weeks from principal photography before it was forever interrupted by the director’s death.

You don’t have to watch a lot of the documentary to realize that both the potential and the problem with Jodorowsky’s Dune was Jodorowsky. Charismatic and spellbinding, he seduced everyone around him with his brazenness; recounting their adventures trying to get the movie off the ground, those involved still shake their heads at the auteur’s audacity, even as they can’t stop smiling. Jodorowsky’s vision constitutes its own defiant manifesto, resistant to reality and contemptuous of banal and more earthbound concerns. When Hollywood did nibble at Dune, by turns bedazzled and daunted by the 3,000-frame treatment—which circulated the studios like a filmic Tibetan Book of the Dead, suggesting celluloid runes and hallucinatory secrets—Jodorowsky routinely found ways to render any Hollywood response unsatisfactory. To proposals that the movie be 90 minutes, the director answered that nothing less than 14 hours would suffice. In fairness 90 minutes would have been preposterously inadequate, and as The Lord of the Rings would prove, 14 hours isn’t as outlandish as it sounded. But the larger point is that while Jodorowsky regarded Jagger, Giger, and Dalí as worthy of his incantations, the studio bosses were beneath him, and Dune may have been doomed as much by the filmmaker’s elitism and ego. With the possible exception of 1989’s Santa Sangre, Jodorowsky the artist didn’t survive Dune’s failure, and it’s not clear he wanted to. You get the sense that in his own mind the tragedy of Dune trumped everyone else’s accomplishments including his own, taking center stage in his life’s story. From the rubble of Jodorowsky’s Dune, Dino de Laurentiis seized the rights to Herbert’s novel and farmed the property out to David Lynch, hardly the stupidest idea on the face of it; dismayed at the prospect of Lynch’s Dune, something he had to be dragged to see, Jodorowsky recounts his delight at realizing the film was awful, a reaction he acknowledges was less than magnanimous, especially since he’s an admirer of Lynch. In the meantime the florets of that massive storyboard were cast to the Hollywood winds like a lysergic dandelion, with images and motifs from Jodorowsky’s epic wreck showing up in Alien, Blade Runner, The Terminator, The Matrix, the more recent Prometheus and Oblivion, the vast deserts and laser battles of Star Wars, the palaces of the evil Baron in the early-’80s Day-Glo Flash Gordon, and the plume of fire shooting skyward when the Ten Commandments are unleashed by the Nazis in Raiders of the Lost Ark. Even a failed dream, if it’s big and bold enough, can change everything.

What to Stream This Weekend: ‘The Adam Project,’ ‘Dune’