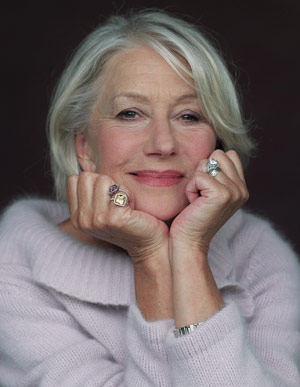 At this point Helen Mirren is smart enough to know that the role of her life is Detective Jane Tennison in Prime Suspect, which has just been released as a box set on DVD. Whether you’re seeing the series for the first time or revisiting it, follow the whole and it becomes apparent how lucky Mirren is to have had the excellent writers, including creator Lynda La Plante, and how lucky the writers are to have had Mirren. Every character development over the show’s 15 years, beginning in the early 1990s, feels authentic and born out of what preceded it. This includes Tennison’s ascent through Britain’s police force in the face of its institutional sexism as well as her growing alcoholism and an aversion to commitment that some might identify as downright male. Jane Tennison is a piece of work. She scarcely can hide her elation when a superior drops dead from a heart attack, presenting her with a career opportunity that she pursues with no small haste, or when someone is murdered, presenting her with a case that liberates her from the drudgery of district budgets. Prickly and paranoid, she hasn’t a clue how to choose her battles until occupational peril is at hand, and when she promises witnesses that she’ll protect them (“I give you my word”), neon bull’s-eyes might as well be affixed to their foreheads. Not until Prime Suspect 6, when she is shaken to her core by a Bosnian war crime, does she lay anything on the line for something bigger than her own prospects.

It was only after the first season of Prime Suspect that Mirren received her first Academy Award nomination, for The Madness of King George. This was 14 years after she deserved one for The Long Good Friday, which is haunted by the final shot of her as a gangster’s moll trying to claw her way out the rear window of a car taking her to her doom. That’s the way awards work, award givers always waiting for some other award giver to give; by then Mirren was in her late forties. Now the prizes and nominations come in bucket loads, as well she deserves them to, most recently for her performance as Leo Tolstoy’s wife and then widow in The Last Station, trying to claw her way out of oblivion and the great writer’s shadow. Along with roles as consort to gangsters and great writers, Mirren has been a sorceress and scientist, ballerina and housekeeper, librarian and editor and novelist, royalty all over the place (both reigning Elizabeths and King George’s queen), and everywhere you look in 2010, as a brothel madam (Love Ranch), Nazi hunter (the upcoming The Debt), CIA agent coming out of retirement (this month’s Red), and Prospera (in a new version of The Tempest).

Only recently has the culture made sense of her. Labeled the “Sex Queen of the Royal Shakespeare Company” by so many articles that this might as well be another, she was the thinking Englishman’s bad girl of the ’70s, beginning with her sea nymph and painter’s nude muse in 1969’s Age of Consent, one of the last features by Britain’s esteemed filmmaker Michael Powell. While electrifying audiences on the stage in London, she routinely, unabashedly selected projects that explored sex’s recesses, drawn to outré directors like Powell, Ken Russell, Lindsay Anderson, and Peter Greenaway. Her penchant for the scandalous culminated with the notorious ’79 Roman Empire debauch Caligula. All the more respectable eminences involved, including Mirren, Peter O’Toole, and John Gielgud, professed themselves shocked, shocked, that a venture directed by Tinto Brass—best known for Salon Kitty, about the erotic exploits of Nazis—and financed by Penthouse publisher Bob Guc-cione could have had less than classical intentions.

The Long Good Friday provided Mirren’s next major role after Caligula, and you have to watch it twice to appreciate how Mirren is the ballast to a raging Bob Hoskins. For years I misremembered Mirren in a crucial way, as the traitor in Hoskins’s circle when in fact she’s the only one whose loyalty is unimpeachable. This attests both to a cumulative impression of Mirren as hard and to a talent for conveying ruthlessness, suggesting not necessarily more intelligence than soul but rather an intelligence that keeps the soul at bay. Her most notable early movies found Mirren not merely a femme fatale but some modern Lilith, the mythical succubus who seduces men in the night and takes their souls when she leaves. In John Boorman’s Excalibur she seduced her half brother, the king, for the purpose of spawning a monster to succeed him. In Cal she slept with a man half her age who had murdered her husband. In The Cook, the Thief, His Wife, and Her Lover she ate her husband; that he had it coming didn’t more easily settle the stomach. In The Comfort of Strangers she was, with Christopher Walken in one of his all-too-rare performances as a whack job, half of a predatory Eurotrash couple in Venice wreaking murder and mayhem on young lovers for the sick pleasure of it.

As more time and movies passed, Mirren outdistanced her wild years, until by 2006, when she played The Queen—casting that once would have been considered counterintuitive if not subversive—it was a no-brainer. Who else to portray Her Majesty but a woman who offscreen was made a Dame and onscreen rose in such unprecedented fashion through the ranks of Scotland Yard? Notably, plans to Americanize Prime Suspect with an American actor, in the manner of other outstanding U.K. series such as Cracker, The Office, and Life on Mars, were abandoned. Cooler heads may have realized that Tennison/Mirren is the kind of Welles/Kane, Bogart/Rick, Karloff/Frankenstein symbiosis that another actor would be a fool to mess with. In Prime Suspect the older, tougher Mirren subsumes the younger in a portrait at once brittle and ultimately resilient, relentless and sporadically empathetic, constricted and clandestinely sensual. As a little of the actress’s early wildness leaks out of Tennison’s self-possession—a pint of bitter with the boys here, a black lover in bed there, a solitary and slightly inebriated dance in the bedroom of her girlhood to Dusty Springfield’s “Stay Awhile”—Tennison remains the renegade amid the machinations and intrigues, in a masculine world of crime and its grisly investigations and violence. She’s the bitch who won’t be pushed around, and it speaks to both the star’s and the show’s complexity that her triumph is tainted, succeeding as she does on male terms in male fashion. So as not to be dismissed as a bitch, which occasionally she is anyway, she becomes a son of a bitch.

To argue that Mirren’s incarnation of Tennison is at all autobiographical, in the metaphorical if not factual sense, may be presumptuous. At the time that Mirren made Prime Suspect, however, she was at a pivotal moment in her career when she brought to bear everything she knew as an actress and everyone she had ever been. Without the tools of experience and expertise that the world offers a man more ungrudgingly than it does a woman, Mirren and Tennison both used the tools of their varied personae. While the weakest of the series, undone in part by the fatal recasting of season one’s original prime suspect in a return appearance, season four is Tennison’s pivotal moment, when the glass ceiling has done all the cracking it’s going to. Faced with the most distressing crimes ever seen on dramatic television—the Brits bring to such storytelling a thoughtful maturity that Americans regard as squishy if not unpatriotic—Tennison’s biggest struggle is to hang on to who she is, keeping an eye on the bastards and bureaucrats who try to undercut her every step while shooting a quick glance to that dim figure receding in the background that’s barely recognizable as herself. Not until the very end, when she skips her own retirement party, is it clear that this is a struggle she’ll win. Caught between the brute force of her psyche and the harsh whisper of her conscience, Tennison sometimes hears the best part of herself, which knows she’s better than the men she answers to and in whose collective faces at the end of that fourth season she hurls a glass of wine. If she were to listen more closely, not only would the best part never again be able to live with the worst, but the two might wonder which is which.