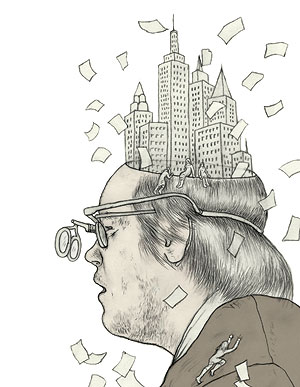 Charlie Kaufman’s career is a thing of wonder. You don’t have to love every moment of Adaptation, Being John Malkovich, or Eternal Sunshine of the Spotless Mind to admire their wit and nerve, but more astonishing is that Kaufman gets away with such strange and singular movies at all, let alone wins Academy Awards and finds himself on lists of Hollywood’s 100 most powerful people. This is particularly striking because in the movie business’s evolutionary scheme he’s an amphibian form barely a notch or two up from the pollywog of the production assistant: the writer. By some twist of fate Kaufman has succeeded where others would never get started. Scripts that would have been flung by witless executives across the abysmal expanse of studio offices have made Kaufman coveted by an industry that would have little use for him if he hadn’t already somehow become Charlie Kaufman. Connecting with hot directors of the moment like Spike Jonze and Michel Gondry and then upstaging them, Kaufman has become an auteur in a way no writer has since Preston Sturges. As has been noted elsewhere, people don’t think of Malkovich or Sunshine as Jonze or Gondry films. They think of them as Kaufman films.

Kaufman’s films are tricks of the mind’s eye. In Malkovich, as original as any movie in the last ten years, puppeteer John Cusack finds a tunnel that leads into Malkovich’s brain; if the movie doesn’t seem to be going anywhere, it almost doesn’t matter because you’re so in the thrall of the conceit. With subsequent films Kaufman has edged away from the cerebral to the personal.  In  Adaptation there’s not only a character named Charlie Kaufman but a twin named Donald, who wasn’t prevented from sharing with Charlie a co-credit on the script and an Oscar nomination by the fact that he doesn’t exist. Throughout Adaptation Charlie and the more chipper Donald war over the soul of the movie we’re watching, which begins as a very real adaptation of a very real book called The Orchid Thief before collapsing into confession. The last third is preposterous, and the entire film seems to unravel, but this is one case where the artist’s timeless response, “But I meant it to be that way!” is incontrovertible. Willfully and perversely, Adaptation turns into the movie it has resisted becoming: the sellout that serves as a moral to Kaufman, who’s constantly haunted by the prospect of selling out. Eternal Sunshine of the Spotless Mind is the movie in which, even as it’s the most convoluted of his scripts, Kaufman found his heart, in the story of a couple who go to extraordinary lengths to forget each other only to meet and fall in love again. As someone obsessed with the tragic lovers Abelard and Heloise—in Malkovich Cusack’s puppets reenact the tale, and the title of Sunshine comes from the epistle by Alexander Pope—Kaufman is a romantic beneath the braininess, a classicist beneath the postmodern.

Kaufman is even more of a freak in Hollywood because so many of the virtues of his writing are novelistic. “The self,” Los Angeles Times book editor David L. Ulin pointed out a couple of years ago in a piece about Kaufman, “is what contemporary literature is all about,” and this self-concern and the willingness to acknowledge it distinguishes our most literary of writer-directors, from Woody Allen to Quentin Tarantino. The realities-within-reality that characterize Kaufman’s stories have more in common with Borges than with a highly regarded screenwriter like Eric Roth (The Insider, Munich, The Good Shepherd); the meditations on memory that are Malkovich and Sunshine make Kaufman a cinematic second cousin of Philip K. Dick, whose 1977 novel, A Scanner Darkly, Kaufman adapted before Richard Linklater took over the project. (Kaufman should check out In Milton Lumky Territory, Dick’s most underrated and misunderstood work, finally being published in the United States this year, half a century after it was written.) Ultimately Kaufman’s writing is about writing, or at least the act of creation, of which the most obvious examples are Adaptation and now Synecdoche, New York. An aspiring filmmaker since he was young, Kaufman also understands that the literalness of most moviemaking is at odds with the medium’s nature—that if any medium lends itself to dreaminess at its most far-flung, it is cinema, going back to Buster Keaton’s Sherlock Jr. if not Georges Méliès.

Like Sturges, Kaufman has decided to eliminate the middleman: the director. The communal aspect of film and theater must be a source of some exasperation for a writer, and by all accounts, including his own, Kaufman isn’t exactly hands-off. Directing one of Kaufman’s earlier scripts, Confessions of a Dangerous Mind, George Clooney apparently made changes without consultation, a violation to which screenwriters inure themselves. Kaufman never got that memo. Kaufman probably directed Synecdoche, New York just so he could keep that title, synecdoche being a pun for the town of Schenectady and meaning …well, I don’t know what it means, and I just looked it up. A playwright-director (Philip Seymour Hoffman) wins a MacArthur grant after his wife (Catherine Keener) leaves him for a fabulous art career in Europe, and he decides to create as his new production his own version of Schenectady in a huge abandoned warehouse. The years go by, people in the form of Samantha Morton, Michelle Williams, Emily Watson, Jennifer Jason Leigh, and Dianne Wiest drift in and out of his life and pass away, and in the Schenectady within Schenectady Hoffman casts his own life: someone playing him, someone playing his lovers, then the actors playing the actors who are auditioning for the play, until people are playing the people who are playing the “real” people. If the concept is somehow at once mind-boggling and predictable, that becomes secondary to a naked intensity and a plumbing of his own depths that Kaufman hasn’t achieved before. From the movie’s opening moments Hoffman’s character is beset by time and its ruthless passage: aging and physical decay, frustration and artistic failure (although getting a MacArthur doesn’t exactly seem like a career setback). A nihilism as reluctant as it is profound creeps first into his real life, then the imaginary one. The result is bleak, shorn of the earlier films’ irony and Escher-like math of the psyche; the last word of Synecdoche, New York is “Die,” which gives away nothing in a story that is about the inevitable and how pointless the inevitable renders everything that precedes it. As Hoffman must turn his life into his play or be consumed by despair, Kaufman has turned his despair into this movie.

I know I sound conflicted about this, but that’s because my twin, Giacomo Erickson, definitely more chipper than I, is writing every other paragraph, or maybe every other sentence or word, and we’re battling over the soul of this column. Neither of us is sure which side he’s on. We’re not certain which of us is the cineast who loves The Third Man and Black Narcissus and The Passion of Joan of Arc and which is the everyman who wants to make sure we get the 3-D glasses when we take our kid to see Journey to the Center of the Earth. Not only are any quibbles about Kaufman’s work overshadowed by its heroism, but the work itself is overshadowed by its heroism; in a pop medium that involves so many millions of dollars, such an audacious vision can only be applauded, and that may be at the core of this wondrous career—the thrill of seeing Kaufman, a little like the Chief in One Flew over the Cuckoo’s Nest, breaking free of the asylum in a dash for his own country, pulling behind him the landscape he’s crossed. When he gets to that country he’ll create his own version of the asylum, and his own versions of sanity and madness.