Home Film Lord of the Ring 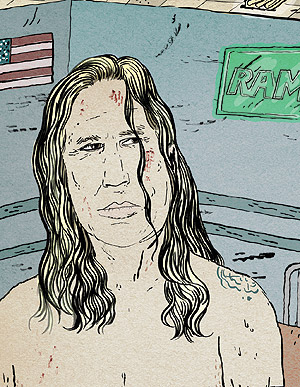 Two weeks after Paul Newman died, The Wrestler had its U.S. premiere on the final night of the New York Film Festival. A quarter of a century ago, The Wrestler’s star, Mickey Rourke, was a leading inheritor of what had been Newman’s mantle: that of the Method’s golden boy, a mix of talent, charm, and movie-star charisma. The comparison ends there. Newman and Rourke were on opposite sides of the psychodrama that has been American film acting since Marlon Brando reinvented and then made a shambles of it back in the ’50s and ’60s. Whatever demons Newman had, he left onscreen, which left him to achieve offscreen equilibrium as activist, race car driver, humanitarian, and family man. Rourke also seemed to find a place and meaning for his demons before the camera, beginning with his scene-stealing performance in 1981’s Body Heat, then in 1982’s Diner, where, among an entourage of budding stars like Kevin Bacon and Ellen Barkin, he stole scenes he wasn’t even in. Unlike Newman, however, when Rourke walked off the soundstage, those demons were just getting started.

Over the quarter of a century since, Rourke has been the subject of more weird stories than any major actor in Hollywood since Brando himself. Rourke’s reemergence came three years ago in Sin City, which he hijacked from Bruce Willis, Clive Owen, and Benicio del Toro as effortlessly as he purloined Diner. He played Marv, the noir Quasimodo out to avenge the hooker he loved, and the physical ravages of the character already were part of Rourke’s legend. There also were reported demands that films in which he appeared include a part for his Chihuahua, Loki; a screw-loose return to boxing in the ’90s, two decades after Rourke gave it up to become an actor; and alleged adventures in plastic surgery bizarre enough to thrill Michael Jackson. You would be forgiven for assuming Marv was typecasting, in that it involved no CGI or makeup at all, but how many such roles were there in Hollywood for someone like Rourke?

At least one, that of Randy “the Ram” Robinson, the washed-up pro of The Wrestler who once ruled Madison Square Garden as easily as Rourke ruled the Hollywood box office whenever he cared to. The movie’s OK. Having invested a fitful half decade in the spectacular and troubled labor of love The Fountain (2006), director Darren Aronofsky opted for the smallest scale of any movie he’s made since his 1998 breakthrough Pi, and often the small scenes are the best. A backstage glimpse into the world of professional wrestling reveals the camaraderie beneath the in-the-ring ferocity. The question of whether the “sport” is real or fake isn’t so simple: The wrestlers may choreograph all the moves beforehand, but that doesn’t mean one of them isn’t really smashing the other over the head with a chair or attacking him with a staple gun. From the iron pumping to the blond streaks in his hair that he gets at a salon, Randy the Ram’s preparations are the heartbreaking rituals of an aging chorus girl in Vegas, a futile fire wall against time. But The Wrestler is so formulaic, we might charitably conclude the formula is on purpose, an homage to one of the great archetypal narratives of cinema. Everything leads to that One Last Match by which the central figure will prove himself to himself, and perhaps as well to the estranged daughter (Evan Rachel Wood) he ignored her whole life, and to the stripper he loves, whose own glory days have been reduced to dwindling nights (Marisa Tomei, subject of a few cruel Hollywood urban legends of her own, now has more than vindicated her 1992 My Cousin Vinny Oscar with first-rate performances in this, in last year’s Before the Devil Knows You’re Dead, and in 2001’s In the Bedroom).

Once movies discovered the close-up, it was inevitable that American film acting would be different from other acting, for reasons as singular and unquantifiable as the American personality itself. There’s no Shakespearean tradition in American acting, there’s no American Molière or Ibsen; the leading family of the early American theater, the Barrymores, performed the European classics because there weren’t any American classics. In America the cinematic tradition predates any theatrical tradition, unless you count minstrel shows. By the time Eugene O’Neill wrote his first major play, Beyond the Horizon, D.W. Griffith already had made Intolerance and Charlie Chaplin was filming his biggest smash to date, The Kid. Clark Gable, Spencer Tracy, and Humphrey Bogart weren’t so much graduates of the theater as refugees from it, turning to the movies when they foundered on Broadway and the Depression made a Hollywood paycheck so alluring. John Wayne was a prop man, and Gary Cooper and James Cagney were ne’er-do-wells who failed at lines of work including newspaper cartoonist and tap dancer. Like Rourke, the young Cagney was even a boxer.

You may have noticed the distinctly male cast. In the dawn of the sound era, American male actors in particular cross-wired craft with persona; part of this was to turn the lack of training into a virtue and part was because for a lot of American actors, then and now, there’s something feminized about acting, which can only be confronted in a two-fisted fashion. Maybe because men in general have less-flexible notions of their sexual identity, a lot of actors have an alpha-dog relationship with their muse, in the same way that Ernest Hemingway was desperate to pummel his inner Keats, or maybe his inner Scott Fitzgerald, into a warrior. But if the actors of the ’30s and ’40s found a way for their self-contempt to coexist with grace—they were professionals and prided themselves as such—the next generation of actors couldn’t stop thinking about it all too damn much. Brando, Montgomery Clift, and James Dean wore their torment on their sleeves. They took their vocation both too seriously and not seriously at all; acting as it had been since the Greeks—a combination of masquerade and testament—became a form of confession. The cliché of the Method was that actors “disappeared into their roles,” but that’s nonsense. Humphrey Bogart disappeared into as many roles or more—Rick, Marlowe, Queeg, Charlie Allnut in The African Queen, Dixon Steele in In a Lonely Place, Fred C. Dobbs in The Treasure of the Sierra Madre—than Robert De Niro ever has. De Niro is De Niro, whether he’s a boxer in the ring or a vigilante driving a taxi or a psycho sinking into the rising water or a prospective father-in-law harassing Ben Stiller. Unlike actors of the theater (the name Barrymore makes more impact than any individual Barrymore did) or British actors on stage or screen (Laurence Olivier’s skill grew as his personality vanished), the ultimate aspiration of the serious American movie actor is to not disappear into roles. If anything, the point of the Method is for the actor to establish a self-conscious authorship of his acting.

Near the end of The Wrestler, at the ring’s center and surrounded one final time by fans whose loyalty dooms him as much as it gives him a reason to live, Rourke delivers a speech obviously written for the actor about his own unhinged life. Randy the Ram’s failure at life has left him with no viable self other than the professional one; like the matches, distinctions of real and fake selves aren’t that simple (it turns out “Randy” isn’t even the character’s name). The confessional nature of acting hasn’t been this explicit since Brando’s Last Tango in Paris. The paradox—given the years that Rourke dedicated himself to reconciling acting with the masculine or, failing that, attempting to reject the actor in him outright—is that confession is the most feminine part of acting, involving the embrace and declaration of innermost feelings, in contrast with the masculine instinct to resist both the embrace and the declaration. Whereas Paul Newman, one of the Method’s most conspicuous graduates, had more in common with the classic movie stars of an earlier generation, which is why for most of his career he was a better star than actor, Mickey Rourke’s truest path to Mickey Rourke the man is through Mickey Rourke the actor, who in this case happens to be playing a role that’s nothing if not a metaphor for Mickey Rourke the man.

This means that the audience brings to The Wrestler and Rourke’s Randy the Ram everything it knows about Rourke. On the one hand this can’t help seeming like a cheat; but if an artist can’t exploit his own life, what can he exploit? Randy the Ram is informed by what the actor knows and what the audience knows, and it would just be petulant cynicism on our part to not concede the heroism. Rourke plays Randy like a man humbled by his own life, and the result humbles an audience for whom Rourke was a joke a decade ago. Like Randy’s final bout, Rourke’s performance may not be so much a second act as a brief moment of glory before the inevitable oblivion, but in any case, neither the actor nor the man—together at last—is likely to be a joke again.