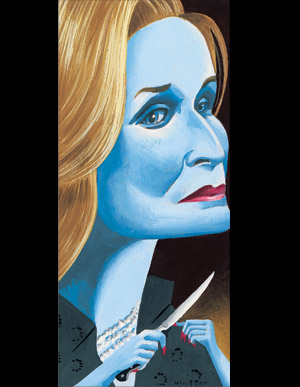 Almost no one today remembers The Defenders. It hasn’t been released on DVD or resurrected by one of the many cable outlets so besotted these days with TV nostalgia. But in the early ’60s, it was considered television drama’s gold standard, sweeping all Emmys in its path. Created by playwright Reginald Rose, who wrote the jury-room classic 12 Angry Men, The Defenders was about a father-son law team played by E.G. Marshall and future Brady Bunch dad Robert Reed; pre-Star Trek William Shatner was sometimes the prosecutor, anticipating his turn on Boston Legal decades later. The Defenders confronted the sociological issues that 12 Angry Men had brushed up against, each case offering Marshall and Reed an opportunity to champion one underdog or another, not unlike 12 Angry Men’s young Latino defendant whom the bigoted jury is so eager to convict before Henry Fonda’s wiser liberal head prevails. The Defenders came on the heels of Perry Mason’s phenomenal success; Perry, of course, was as much a private eye as a lawyer, clearing his client in the orgy of confession that concluded each episode. The big shocker of The Defenders that made it seem especially grown-up was that sometimes Marshall and Reed lost cases.

The Defenders was the prototype of what came to be considered the mature legal drama, and also the last time the culture regarded the barrister’s profession so highly. Every lawyer show since, whether the most prosaic (Matlock, Judging Amy, Law & Order in all its permutations) or the most cynical and eccentric (L.A. Law, Ally McBeal, The Practice), has concerned itself with how the law becomes compromised: “I don’t believe in the law anymore,” one TV lawyer recently put it. “I believe in justice.” The inescapable implication is that the two not only have nothing to do with each other but are at odds. Those words were spoken by Rose Byrne on the hot law series of the moment, Damages. From its Goth opening (“Little lamb,” the theme song intones, “when I am through with you, there won’t be anything left”) to its Kubrickian elevator doors threatening to unleash a reservoir of blood to the hip cinematography that drains every image of humanity and replaces it with a rotted glamour, Damages mocks The Defenders from the dark side of the millennium. Byrne is Damages’ little lamb Ellen Parsons, an eager young attorney on the make who’s been wooed by über-litigator Patty Hewes, played by Glenn Close, to come join her firm against the advice of everyone who tries to warn her. By the beginning of the second and current season, the lamb has grown fangs of her own.

The new season of Damages isn’t going to make a lot of sense if you haven’t seen the first. While the case at the center of the debut was resolved—involving CEO Arthur Frobisher (Ted Danson) in an Enron-like fraud that wiped out thousands of small-time investors after he dumped his own stock—Hewes’s many machinations to destroy Frobisher have unleashed consequences that now are having consequences of their own. As Parsons has discovered, she was pursued by Hewes only because her fiancé’s sister was a potential witness; Parsons also is under the impression, not unreasonably, that Hewes put a hit out on her that went awry—less than E.G. Marshall-like behavior. It’s hard to say what makes Hewes tick, but it would seem to be some mix of competitiveness, social outrage that may or may not be genuine, the failures of her imposing father, and her similar failures as a mother. Such paint-by-numbers motivations define all the characters in Damages except Parsons, who isn’t defined at all; the only character in a season and a half who has commanded any sympathy is Parson’s dupe of a fiancé, who had the advantage of being not a lawyer but a doctor and the disadvantage of winding up dead. Damages has most benefited from a cast that makes more of the material than is there, like the shockingly good Danson as a narcissist enthralled by his own lies and charm, convincing himself he’s not such a bad guy even as he orders up murder—along with his hooker and cocaine—like room service, and the superb character actor Zeljko Ivanek, who stole the first season as the opposing attorney and continues to haunt the show. In the second season the cast has been joined by the always first-rate Marcia Gay Harden as another attorney and William Hurt as a brilliant environmental scientist caught up in the web of his conflicting agendas and suspicions of murdering his wife. His mannered acting wore out its welcome by the third episode.

All these people are sociopaths, and none more so than Hewes. A quarter century ago Close made her initial impact on audiences as the good girl among femmes fatales Kim Basinger and Barbara Hershey in The Natural, then as the feminist mother in The World According to Garp, finally as the sensible one among The Big Chill’s self-absorbed neurotics (which included Hurt). She soon found her inner bad girl in a big way: She was the Medusa of wayward husbands in Fatal Attraction and, in what until now probably has been her definitive performance, the bored and diabolical marquise in Dangerous Liaisons, plucking the wings off Michelle Pfeiffer’s innocence. In Damages she’s half a dozen shades of terrifying, the most banal being when she exudes the icy control that is her default mode, increasingly monstrous as she goes from fury to feigned amiability, and most frightening in those rare moments when she loses control. The black hole into which the rest of the show rushes, Close’s performance is the most impressive tour de force by an actress on television since Edie Falco vanished in the dark blink that put The Sopranos to sleep.

Nothing if not slick, Damages is compulsively watchable before it succumbs to its plotting, the weakest thing about the show, and before the formula becomes predictable. Every narrative twist arrives like clockwork, every character not what he or she seems, every turn in the story not what it seems; it’s telling that one of the sources Damages swipes from is The Sting, when a hired shooter we’ve been led to believe is after Guy A instead guns down seductive Girl B, who was the one really hired to kill Guy A. Every twist is inordinately pleased with itself, and soon anyone can see the next one coming a month away. Another interesting thing about Damages is that it makes my skin crawl. Maybe the age we live in, when everyone feels so vulnerable, renders everyone in Damages that much more repellent, but in any case the show is the electronic version of a swarm of locusts, celebrating the predatory at its most well dressed, in bloodred lipstick and nail polish. The embalming fluid running through everyone’s veins is as chilled as champagne on ice.

At this point the idealism of The Defenders is so quaint as to seem science fiction. On the other hand, we may be entering an era when we can afford the nihilism of Damages just a little less; while the makers of the show would have us believe the villainy of Close’s character is morally complicated because she’s on the “right” side of her class-action suits, taking on the powerful, no one can buy that. Her ruthlessness crosses too many lines, and too transparently her advocacy is more gamesmanship than conviction. She and the attorneys who oppose her are the Richelieus for kings and queens not so far removed from the same Wall Street wheelers and dealers who lately spent their time and our money ruining the country. We assume a popular culture reflects society, when often what it reflects is society’s counterpoint; screwball comedy was born in the desperate ’30s, in the depth of the Depression, and noir was a bleak response to the end of World War II, as the ’40s were looking more hopeful. Damages doesn’t have the heart to earn our giddiness as a guilty pleasure in better days or to overcome our dread when the times are uncertain.