Home Film Julianne Moore, Michael Keaton, and an Academy Bent on Getting It Wrong 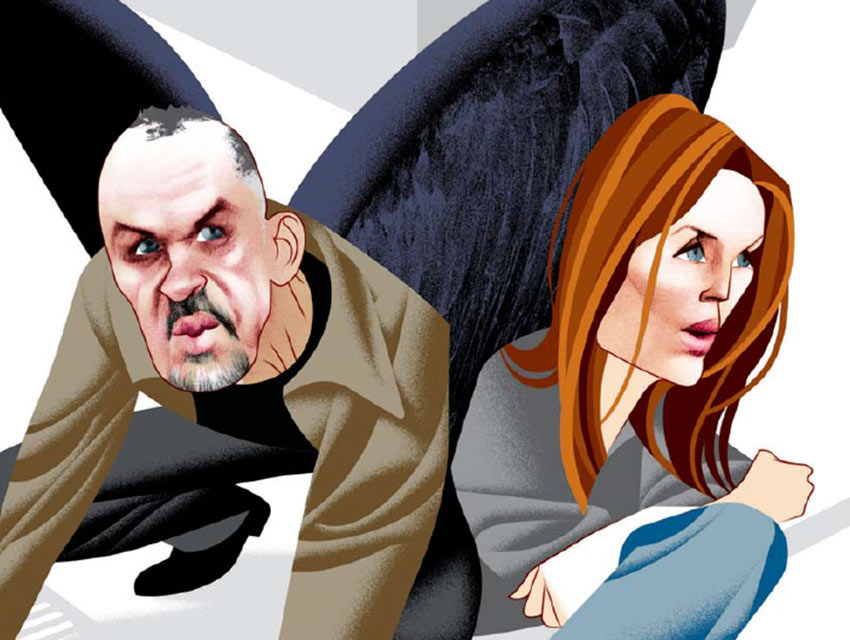 Julianne Moore and Michael Keaton began in 1980s soap operas and 1970s sitcoms, respectively, such ancient history by show business standards that you need carbon dating to measure their careers. One of the great actresses of her generation for long enough that most people assume she already has an Academy Award, Moore should have won 17 years ago for Boogie Nights, as Amber Waves, the porn queen as clueless as the child whose custody she’s trying to win. She went on to be nominated three more times, twice in 2002 when she contended in both lead (Far from Heaven) and supporting (The Hours) categories; there also was extraordinary work—as the guilt-ridden trophy wife in Magnolia and the wayward half of a same-sex marriage in The Kids Are All Right—that the Oscars ignored altogether. Most people assume Keaton has been nominated at least once even if they’re uncertain for what, rightly concluding that Batman and Beetlejuice aren’t the sort of thing the motion picture academy takes seriously. His casting in the 1989 Tim Burton film that single-handedly ignited the superhero phenomenon was controversial while establishing a template by which Robert Downey Jr. as Iron Man doesn’t seem so eccentric. Beetlejuice, another Burton picture, was some kind of comedic tour de force for Keaton, who received as much Oscar attention as other comedic tours de force going back to Charlie Chaplin in City Lights and Cary Grant in His Girl Friday and Marilyn Monroe in Some Like It Hot and Bill Murray in Groundhog Day, none of whom was nominated.

After Keaton walked away from the Batman franchise more than a couple of decades ago, his career went into what even he might call a slump. In Birdman he plays an actor who walked away from a superhero franchise into a slump and now bids for one last chance at artistic redemption. In Still Alice Moore plays a wife and mother prematurely slipping into dementia and coming to grips with the loss of herself and everyone around her; a linguistics professor, she also is under siege on terrain she thought she understood. That Keaton and Moore are favorites this year for the academy’s best actor and actress prizes is partly because they’re perceived as having been overlooked in the past. The better-late-than-never Oscar is a familiar syndrome that some consider a collapse of intellectual rigor and an example of the awards at their most sentimental, by which the awkward righting of past injustices only compounds present ones. Egregious as it may have been for the academy to pass over Al Pacino seven times for The Godfather and Dog Day Afternoon, among other pictures, possibly Pacino himself winces at having received his long-elusive validation the eighth time around for 1992’s bombastic Scent of a Woman, a pity award if there ever was one. Winning it against Denzel Washington, who gave one of the towering performances of the 1990s in Malcolm X, only made Pacino’s accolade more dubious.

Can anything be less cool than defending the motion picture academy? Nonetheless, since the Pacino-Washington debacle—and notwithstanding the occasional curiosity of Matthew McConaughey morphing from our most underrated actor to our most overrated in a year’s time—the calculations of Oscar voters have been more balanced. Sometimes the academy is hardheaded: Just a few years before Peter O’Toole died, they had the chance to rectify the seven times they nominated him only to deny him, including for his landmark portrayal of megalomania in Lawrence of Arabia; instead they denied him again for the slightly creepy December-April ro-mance Venus, reasonably choosing Forest Whitaker’s Idi Amin in The Last King of Scotland. On other occasions, however, the achievement of a lifetime is as worthwhile a reason as any to give an Oscar, especially when it’s the X factor that finally tips the scales. If best picture winner The Departed was as good as anything else in 2006 (Little Miss Sunshine, The Queen), or if Kate Winslet, after five nominations, was as good in The Reader as anyone else in 2008 (Anne Hathaway, Angelina Jolie), why not seize the opportunity to give her or Martin Scorsese the Oscars they should have won before?

We may have vanished a little too far up our own nether regions if we don’t recognize that awards are capricious gestures to begin with, and in any case, Keaton’s and Moore’s performances are award-worthy on their own terms. His is a hall-of-mirrors confession true and deeply felt, avoiding the smirk of meta and the indulgences of self-congratulation or self-pity. In its imagination and emotional scope, it holds its own against the bravura physicality of Eddie Redmayne in The Theory of Everything, who can’t avoid flecks of the whitewash the filmmakers bring to Stephen Hawking’s love life, and the pathos of The Imitation Game’s Benedict Cumberbatch, who needs a career boost right now like a roadrunner needs Red Bull. For her part, Moore’s secret weapon this year may be not the subtler Still Alice but her harrowing plunge into the madness of Maps to the Stars, in which an over-the-hill movie star picks up where Sunset Boulevard ’s Norma Desmond—if not Amber Waves in another lifetime—left off. In the tradition of Jessica Lange, who got an Oscar for playing a hot actress in Tootsie the same year everyone knew it was for her crazy actress in Frances, awarding Still Alice may be the academy’s covert way of also honoring a blistering, surreal portrait of Hollywood that it otherwise can’t bring itself to acknowledge. Movie history will provide the usual footnotes, while a great artist finally gets her due.