Home Film Judging the Art, Not the Artist 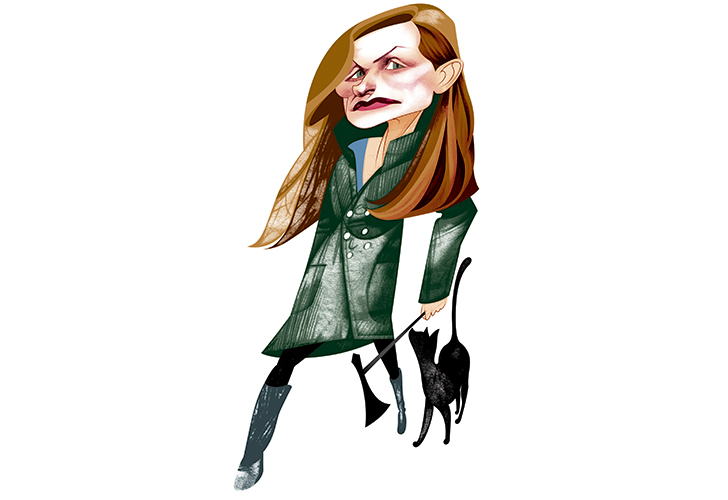 I’m not righteous enough to be an expert on such things, but I believe that in holier circles the saying is “Hate the sin but love the sinner.” In movie circles we sometimes love the film while hating the filmmaker—or, if hate is too strong a word, harbor a deep ambivalence, anyway. With Basic Instinct, RoboCop, and Showgirls, director Paul Verhoeven has unsettled American audiences over the decades even as they’ve still flocked to his pictures. Now approaching 80, he delivers his new one, Elle, as complex and assured as anything he’s done, and also as dangerous. Verhoeven’s story of a relentless businesswoman, who thinks she’s in more control of her life than she is, brings the sensational transgressions of Basic Instinct back around to the director’s breakthrough of nearly half a century ago, Turkish Delight, considered by many in his homeland the greatest Dutch picture ever made.

At the center of Elle is a rape, rendering the movie a grenade with its pin pulled to anyone who writes about movies for a monthly magazine. The subject tempts the most conscientious critic to scurry for almost any other shelter, something less controversial, more lighthearted—a film about, say, American slavery made by a director once accused of, say, rape. Reading this, you’re getting the uneasy sense of where the next thousand words are headed and may be as unsure about whether you want to finish reading them as I am about whether to write them. At hand we have the quandary of what to do about a movie (or book or song or painting or play) too impressive to be dismissed and too debatable to be fully embraced. When I was young and woke each morning to the chirping of pterodactyls outside my window, the culture was at once more rigorous and more liberal about such considerations, making distinctions between The Cantos and Mussolini-fanboy Ezra Pound, who wrote them. It’s a principle I haven’t altogether abandoned. When John Wayne disappears into the red Monument Valley dust of The Searchers, framed in the doorway of the cabin to which he’s just returned Natalie Wood, every nitwitted thing he ever said offscreen about the Hollywood blacklist or American Indians vanishes with him, at least in that moment. But I’ve also come to realize such distinctions aren’t always so facile or straightforward, that extracting the creator from his or her creation doesn’t always make logical, let alone moral, sense. Trust the art and not the artist, D.H. Lawrence said in so many words—an aesthete’s if not a secularist’s version of differentiating between the sin and the sinner. Lawrence never went so far as to claim, however, that the art and the artist are two different things. To the contrary, he maintained that the art knows more about the artist than the artist does, that the bond between the two is more profound than even the artist understands, that the art tells us something about the artist at his or her darkest and also brightest, at the artist’s most debased and transcendent.

So when Nate Parker’s powerhouse cine-manifesto, The Birth of a Nation (based on a doomed slave revolt in the early 1830s), depicts African American women taken sexually against their will harrowingly and brutally by white masters, these scenes happen in the shadow of what the audience may know about Parker’s own arrest and trial for rape 17 years ago. In turn, the director’s past is informed by his movie. Does Parker’s picture constitute penance? Is it a further protestation of innocence beyond what he has offered before? Or do we continue to insist that the film is conceived and shot by the filmmaker and viewed by the audience outside any context but its own rarefied creation—as art that’s a thing unto itself, divorced from allegations about an artist’s past actions, as in Parker’s instance, or arguments about an artist’s past sensibilities, as in Verhoeven’s? Is art assessed on only its own terms even when those terms inevitably encompass the artist’s psyche that accounts for past actions and sensibilities? I very much admire Verhoeven’s Elle as a movie unto itself, with its audacity and insight and skill, yet I’d feel better if a story about rape had been directed or written by a woman, or adapted from a novel by a woman, or if there were some involvement of import by any woman notwithstanding the significant contribution of its star, Isabelle Huppert. Otherwise we can’t avoid asking whether a sensationalist filmmaker like Verhoeven is as likely to have used the subject of rape for sensational reasons as for serious ones. Not only does rape open the picture—the audience hears on the soundtrack the clattering of the assault, of human cries and things breaking, before a single image appears—but before the story is over, there will be at least one more sexual attack that Huppert’s central character seems to invite, as her no-nonsense executive at a video game production company (that injects its product with as much sexual violence as the market can bear) sets out to solve the mystery of the rapist’s identity and then confront him.

Subversion—or perversion, if that’s your point of view—comes as naturally to Verhoeven as to Sharon Stone crossing her legs without her panties. Because Elle is so smart and anchored by yet another impeccable performance by one of France’s two or three greatest living actresses, it earns the benefit of some doubt; its subtext contends, in refutation of bumper sticker axioms, that rape is an act of violence and sex. It insists that what distinguishes rape from other assault is its sexual nature, which doesn’t for a moment diminish the violence or its horror. But when Elle is defended as a feature about “female empowerment,” as numerous critics have written, I can’t help believing people are kidding themselves. Elle is no more about female empowerment than was Verhoeven’s Vegas-stripper epic, Showgirls, and in fact a better defense might be made for Showgirls. Fully utilizing Huppert’s trademark still-waters inscrutability, Verhoeven hints that, as Huppert lures her assailant back for another try ostensibly to even the score, she actually gets off on the rape itself. I’m sorry. I hear the cyber-whooshing of angry tweets as I write this. So before you take this repellent observation to task, see the film yourself and tell me I’m wrong. I promise: I would love to be wrong.

If I’m right, however, then what are we to make of Elle? Well, nothing simple. Elle is everything that it is in equally formidable and disquieting measure, because if it’s not a female-empowerment movie, it’s certainly not a pro-rape movie, either. It’s not meant to be everywoman’s story but rather this woman’s story. It’s a film that’s complicated, from a filmmaker who’s complicated, starring an actress who’s complicated, which is what most worthwhile artists are, including the accused rapist who made The Birth of a Nation and was also, I should add, acquitted of the charges against him in a murkier-than-usual case where the alleged rapist was black and the alleged victim was white. I realize the questions posed here scream for definitive answers, when the whole point of such questions is that there aren’t any. Americans don’t do ambivalence, and regard nuance as the province of the ethically squishy. That’s why and how we profess to make distinctions between the sin and the sinner even as we never really do, even as we never really can.