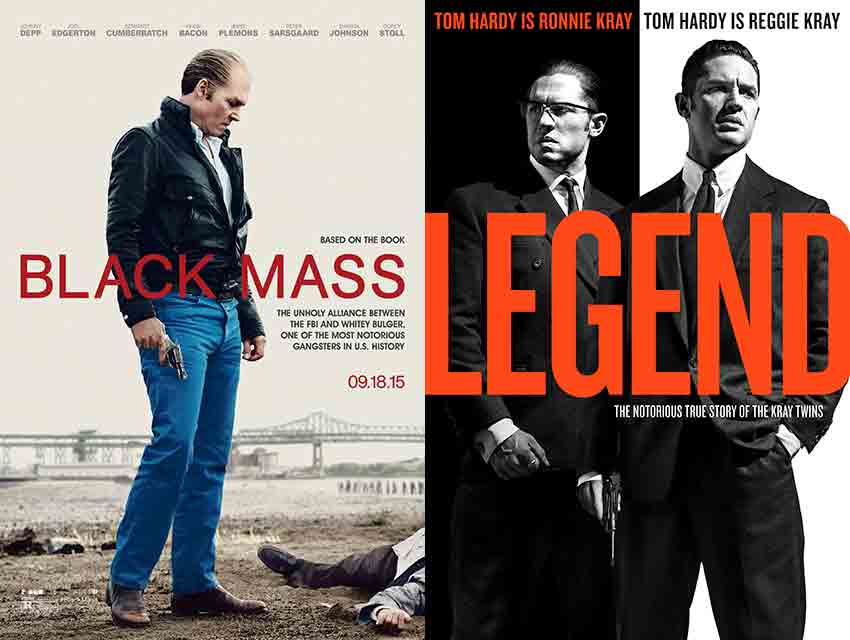 Two gangster pictures—one set to open in L.A. this coming Friday and the other in a few weeks—have drawn packed crowds to this year’s 40th Toronto International Film Festival. If you think the genre must be fairly exhausted by now, with nothing new to offer after The Godfather, Goodfellas and The Sopranos, neither Black Mass nor Legend will prove you wrong, except as a showcase for their star turns. Johnny Depp plays real-life Irish Boston mob boss “Whitey” Bulger, on whom Jack Nicholson’s role in Martin Scorsese’s last near-great picture, The Departed, was based, but Depp is better. In Black Mass, directed by Crazy Heart’s Scott Cooper, Depp has, at least for the moment, finally retired the combination of whimsy and slightly goofy cool that has come to characterize so many of his late performances. This is, for probably the first time in his career, a truly scary Depp, with very rare moments—the death of a young son, for instance—in which he’s even slightly sympathetic. (The real-life Bulger, incidentally, was apprehended in Santa Monica four years ago, after being on the run for nearly two decades.)

Even more impressive in the more flawed film, Legend, British actor Tom Hardy plays Ronnie and Reggie Kray, sociopath twins who ran London’s underground during its Swinging ‘60s. With all due credit to writer-director Brian Helgeland, who scripted himself to an Oscar with 1997’s L.A. Confidential and a nomination for 2003’s Mystic River, and his CGI team, which somehow seamlessly pulls off a ferocious and prolonged fist fight between the brothers in a club, the true special effect is Hardy’s performance, impressive enough to make you forget ten minutes into the picture that he’s not two people. If he can stand the comparison better than a half century’s worth of other actors—and I’m betting he can—Hardy is a latter-day British Brando, otherwise seen this year in at least four other features including the upcoming western The Revenant with Leonardo DiCaprio and as the title character in this past summer’s Mad Max: Fury Road (in which, it should probably be noted, it was Charlize Theron who drove off with the picture).