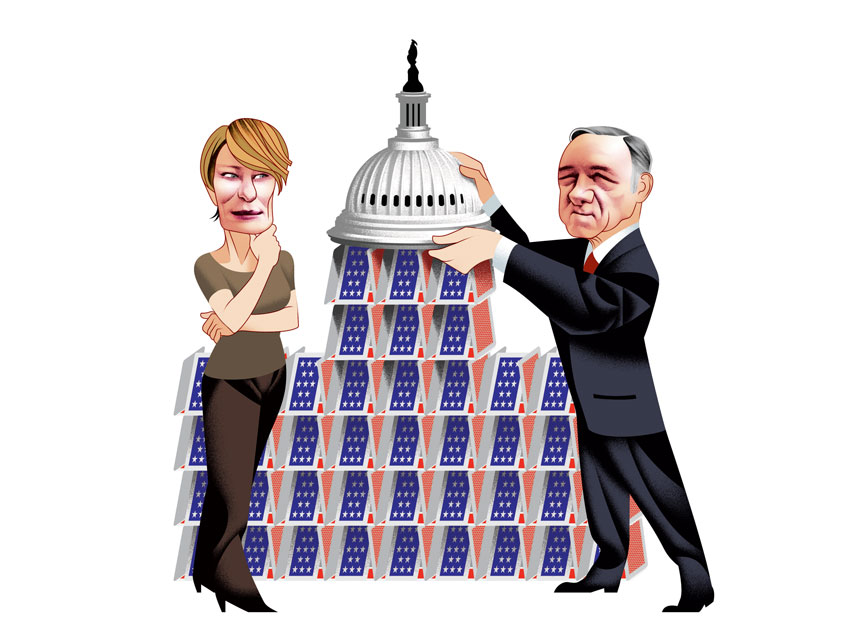 House of Cards is a moral smudge of a TV show, a black hole in the airwaves from which no light escapes. Nothing was edifying in the first two seasons, which chronicled the upward mobility of Congressman Francis Underwood and his lobbyist wife, Claire, by way of deceit, blackmail, scorched-earth -career destruction, the wanton ravaging of constitutional process, and at least two murders; at any point midbinge, one felt the need for a shower and mouthwash. Contempt is the series’ lifeblood, making a mockery of whatever idealism might persist on the part of the American television audience if not the citizenry in general. The show’s doings are so squalid and irredeemable, the Underwoods’ predatory tarantella through the corridors of power so repellent, that I remember feeling depressed for days after the end of season two, wishing I could reach into and pluck from my brain the experience of having watched it.

I’ve been counting the hours until season three.

Because although I’m certain that House of Cards is killing my civic soul an eye’s blink at a time, Underwood’s ruthless climb up what 19th-century British prime minister Benjamin Disraeli called the “greasy pole” (in this case slicked with blood and other human fluids) is irresistible, especially now that he’s reached the presidency. Kevin Spacey’s lethal charm thrills us every time he turns to the camera and locks us in his gaze. As Claire, Robin Wright has been glacial and monstrous, with flashes of nuance and humanity leaking through occasionally, and in the new season she fully emerges as the drama’s deepest mystery. “I love that woman,” Francis has said of Claire, “more than sharks love blood.” But the greatest secrets that Francis and Claire keep have less to do with political machinations than psychological orchestrations: never-born children, rape suffered and manipulated, unfulfilled dreams more profound, apparently, than even those of power. Part of the third season’s suspense lies in what the Underwoods finally will do to each other let alone the country, poised as they are between Machiavelli’s maxim five centuries ago that the national good may necessitate individual evil and Heraclitus’s insistence two millennia prior that character is destiny. As the season opens, they’ve been in the White House for six months with polls plummeting, once-devout alliances unraveling, and Francis’s political party adamant that he abandon any plans he has for another term. Then there are the soldiers coming home in caskets. For a fleeting moment the president is almost haunted, dare we say conscience stricken—until the first lady puts a stop to it. “I won’t indulge that,” she coolly informs him.

Most revelatory about the phenomenon of House of Cards (its third season, like the first two, streaming in bulk on Netflix) is that, if reports are to be believed, no small number of viewers wonders whether Washington is actually like this. Perhaps the show’s 1990 BBC prototype provoked similar queries in the United Kingdom about Westminster, but probably the American version is a singular Rorschach for just how dim a view we hold of our politics these days. For many the Underwoods embody our contemporary leaders—which makes it particularly startling how much more unprincipled and reprehensible they are than television’s other D.C. power couple, also in their third season: Elizabeth and Philip Jennings, the attractive suburban parents of FX’s The Americans, who are one misstep away from lethal injection or, worse, an all-expenses-paid trip back home, which happens to be Moscow. Elizabeth and Phil are Soviet operatives, with more assassinations on their hands than they or we can count, in a KGB-arranged marriage that’s expected to withstand the strain of not only sexual infidelity—a tool of the trade, as it is for the Underwoods—but another marriage altogether (between Phil and an FBI clerk). Unlike the Underwoods, the Jennings couple have larger convictions that routinely swallow up whatever individual ambitions they allow themselves to harbor; their biggest ethical lapse—egregious enough that they talk about it only when and where they’re sure no one else listens—is when Phil begins to think that life behind enemy lines in the decadent United States maybe isn’t so bad. He likes the spacious house. He loves his brand-new, gleaming white Camaro Z28. “The food’s pretty great,” he argues.

Set in the early 1980s, when Ronald Reagan’s election as president has made the Cold War scarier than at any time since the Cuban Missile Crisis, the first two seasons of The Americans found its protagonists increasingly in the crossfire of what they believed and their own self-interests. In the new season Ma and Pa Spy are at that most traditional of impasses between couples: how to raise their two kids, to whose future the Kremlin is overtly laying claim. Ferociously playing off the all-American-girl image she cultivated more than a decade ago in her TV hit Felicity, Keri Russell as Elizabeth—the more uncompromising of the couple—accepts that teenage Paige will be groomed as a Stalinist agent, while Phil, portrayed by the fine Welsh actor Matthew Rhys, is hostile to his employers’ designs. Alternately cold-blooded and empathetic, already pushed to a breaking point by the mounting executions at his feet, he’s considering the heretical notion that an individual life might sometimes matter more than ideology and that their daughter should make her own choices. The philosophical quandaries of The Americans are compounded by a shadow story of the FBI man on their trail and his doomed love for a Russian apparatchik whose true intentions may be as opaque to her as they are to us.

House of Cards and The Americans represent opposite sides of a paradox for television viewers. Even as we’ve been perversely seduced into rooting for the Underwoods, we’re never really emotionally invested in their outcome; even as we become invested in the outcome of the Jennings family, we can never bring ourselves to root for them. Created by writer Beau Willimon, who’s worked on several political campaigns, House of Cards cannily exploits the current widespread cynicism for our politics, catering to a public scorn that’s warranted and also glib in the sort of cheap pox-on-both-houses way that means not having to pay attention. That said, halfway through the new season, cynicism is blindsided when Claire, having admonished her husband for his brief crisis of conscience, succumbs to her own—whereupon the beleaguered president turns to the camera and delivers five words that tell us just how much trouble he’s in. Lacking Spacey’s star turn and overcrowded with mayhem and various intrigues, The Americans isn’t as compulsively delicious; but as the most morally complex show since Breaking Bad, it grips us in the same escalating sense of dread. Assuming the series doesn’t lose its integrity, there seems no way that things can turn out well for anyone. If Marxist theory dictates that the personal is always political, the rebuttal of both The Americans and House of Cards is that the political is always personal, the sum total of our collective needs and desires, vows and betrayals.