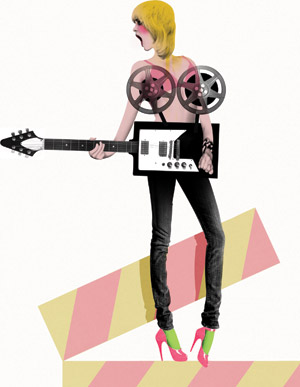 I know I’m dating myself, but I saw the Runaways play in the late 1970s. I think it was at the Santa Monica Civic Auditorium, though in my decrepitude I wouldn’t swear to that. My life was a musical non sequitur in those days: The radio was wall-to-wall Eagles, Fleetwood Mac, Steely Dan, Linda Ronstadt, while my record collection was wall-to-wall Bowie, Roxy Music, Mott the Hoople, Lou Reed. The early scenes of director Floria Sigismondi’s new movie The Runaways don’t always get the details right—Richard Nixon wasn’t president in 1975 and people didn’t say “dude”—but immediately familiar is the sense of cultural exile as felt by Joan Jett (née Larkin) and Cherie Currie (real name), two teen nomads on the Sunset Strip who had more in common with London glam/punk than the slick, mellow sounds of their hometown. Which is to say that it doesn’t always matter to me whether The Runaways is good. Enough of my own life, or at least the life I imagined for myself back then, is up on the screen for me to get lost in it.

The silliest of punk’s pretensions was that it sprang from the asphalt unmediated by the shallowness of showbiz. Punk was full of itself and on the make from the get-go, and all the better for it. As Britain’s Sex Pistols were cajoled into being by haberdasher-con man Malcolm McLaren, the Runaways were svengalied by a glorified lounge lizard named Kim Fowley, who may have been less inspired by music than by dreams of his own personal underage harem. At 16, Currie was the Runaways’ lead singer, one of the band’s last recruits and picked to be a star for that most time-honored of reasons: She looked like one—a San Fernando Valley Bardot, as Fowley would have it, long on bleach and black eyeliner. The other girls, including Jett, guitarist Lita Ford, and drummer Sandy West, weren’t much older, and the group was designed to taunt adolescent guys whose fantasies exceeded their testosterone. In the movie Fowley’s insistence that he wants to “see the scratches down [the boys’] backs” is the nearest thing to a mission statement any band ever had or needed. The Runaways overstates the band’s impact at the time, when they were perceived as something between a cult group and a novelty (except in Japan, where they were a genuine sensation), but if it’s a stretch to suggest that the Go-Go’s and the Bangles in the ’70s and ’80s, or Bikini Kill and the Donnas and Sleater-Kinney and Le Tigre in the decades after, wouldn’t have existed without them, certainly the Runaways provided the reference point. Almost incidentally, songs like “I Love Playing with Fire” and the anthem “Cherry Bomb,” every one of its virginity-detonating implications entirely intentional, are better than a reasonable person wants to admit.

The rock and roll movie has been around since before rock and roll. The cliché that became rock’s ethos, about dying young and leaving a beautiful corpse, was expressed in a 1949 Humphrey Bogart picture, Knock on Any Door, and if Marlon Brando wasn’t the first rock and roll film star, then surely James Dean was. Dean began shooting East of Eden in May 1954, a little more than a month before Elvis Presley’s monumental recording session at Sun Studio. By the time Presley’s best movie, Jailhouse Rock, was released in late 1957, the singer had his eye on the martyred Dean’s legacy.

Rock and roll as an idea—to the extent it was ever an idea at the beginning—was the result of a collision between the musical and the cinematic, when Bill Haley & His Comets’ “Rock Around the Clock,” a year-old song that had achieved only moderate success, exploded on the soundtrack of 1955’s Blackboard Jungle. Thus a sound was joined to an image. None of this is to give the movies more credit than they deserve. Hollywood has never understood rock: Middle-aged veteran Frank Tashlin was clueless enough to think that his 1956 classic, The Girl Can’t Help It, made fun of the music, while in a theater 8,000 miles away, in the thrall of Little Richard singing “Ready Teddy” and Fats Domino performing “Blue Monday,” teens John Lennon and Paul McCartney had other notions. Even the major directors of the rock generation didn’t get the music. There’s no rock and roll in Steven Spielberg’s sensibility, or George Lucas’s; for Lucas the music in American Graffiti evokes nostalgia, an innocence at odds with the music’s original spirit. Notwithstanding his canny use of the Doors in Apocalypse Now, Francis Coppola was too much a traditionalist to hear in the music more than a kind of sonic journalism. Only for Martin Scorsese has rock been a muse, which is why “Gimme Shelter” seems to be in every film he makes.

The music had to grow up for the rock biopic to become its own genre, and by the mid-’70s, rock was in its young adulthood. The first biopic of note was ’78’s The Buddy Holly Story, directed by Steve Rash. This was followed over the years by features as disparate as Alex Cox’s Sid & Nanc (’86), Oliver Stone’s The Doors (’91), Iain Softley’s Backbeat (’94),  Taylor Hackford’s Ray (’04),  and Todd Haynes’s I’m Not There(’07). For better and worse The Runaways shares with them several things, including the usual narrative trajectory from obscurity to opportunity to glory to downfall to, maybe, comeback that’s rendered operatic by the extraordinary infusion of sex and drugs that’s part of the equation. Inevitably this trajectory is marked by biographical signifiers that feel more functional than organic. In The Runaways the opening shot is a drop of menstrual blood smacking against the hot pavement, the young Currie finally ambushed by womanhood, which unleashes her to pursue ambitions she thinks she’s ready for but isn’t. It’s an effective beginning but also underscores how, by their very nature, these pictures are obligated to communicate in metaphors, trying to express visually what isn’t visual, to tell life stories that don’t fall neatly into three acts. No matter how hard the director attempts to impart a certain verisimilitude, the scene where the artist stumbles onto a pop standard—in this case “Cherry Bomb,” composed on the spot during Currie’s audition in a trailer—comes off contrived. The exception is someone like Stone, who so buys into the myth of Jim Morrison that by sheer force of conviction the result captures everything about the Doors both great and preposterous.

The Doors also has Val Kilmer as Morrison, an excellent example of how, more than in other pictures, it falls to the actor to convey intangibles. Virtually all of the successful rock biopics are heavily dependent on key performances by the likes of Kilmer, Gary Busey, Gary Oldman, Ian Hart and Sheryl Lee, Jamie Foxx, Cate Blanchett. In The Buddy Holly Story Busey’s performance is bigger and truer than the movie, as is the case with Foxx’s Ray Charles and Blanchett’s Bob Dylan in I’m Not There. In The Runaways, Michael Shannon (Revolutionary Road) as Fowley gets most of the Jim Morrison fireworks. He’s deliciously over the top and you wouldn’t want him any other way; for Fowley rock and roll is the soundtrack of sex, when sex isn’t the choreography of rock and roll. Because the film is loosely based on Currie’s memoir and because Currie’s story comes closest to providing the kind of arc that conventional movies consider imperative, Dakota Fanning is charged with carrying The Runaways, as Currie wound up charged with carrying the band. A shy loner regarded by the others with a suspicion that grows as Currie morphs into Aladdin Sane crossed with a pole dancer, she embodies the band’s fortunes more than the rest would like, and eventually more than she would like, too. Fanning may capture too well how broken Currie is—coming from a home where Dad is a drunk and Mom runs off to Indonesia with the latest boyfriend and sister Marie is both confidante and resentful rival—for her brazen and aggressive moments onstage to be fully convincing, even as she’s impressive in them. By contrast Kristen Stewart provides the movie the constancy that Jett gave to the band as its Keith Richards samurai, in it for the long haul before she knows what the long haul might be. With what is the least showy of the three leading roles, Stewart is the film’s surprise, cracking the cocoon of sullenness that’s enshrouded earlier performances (Into the Wild, Adventureland, Twilight) and emerging fierce, passionate, maybe even visionary.

When the Runaways appeared, they were the product of a paradox, the contradiction between rock’s romanticism and anarchism. Rock always has had an anarchic streak that resists the same self-mythologization that romantics insist on. The artists who came out of the mid- and late ’70s and triumphed were those who reconciled the anarchy with the romanticism and synthesized it: Patti Smith, Bruce Springsteen, Blondie, the Ramones, all making music that was as much about the music itself. On a cruder level the Runaways did this, too. The movie by Sigismondi (with a résumé of videos for David Bowie, Björk, and the White Stripes, among others) is a document of that. Thankfully it has no interest in being a cautionary tale, except for audiences who feel the need to be cautioned against their dreams. Icarus-like, the band was bound to crash and burn. Lita Ford became a heavy-metal act, and Sandy West, in some ways the band’s true founder, died of cancer a few years ago. Unsurprisingly Jett would not be denied; when some tried to, she started her own label and made terrific records, including “I Love Rock and Roll,” “Crimson and Clover,” “Bad Reputation,” and “I Hate Myself for Loving You.” Currie had a short acting career in 1980’s Foxes (she was quite good) and This Is Spinal Tap. Now she lives as an artist in Chatsworth, working in wood; her instrument of choice is the chain saw. Sometimes life provides its own metaphors.