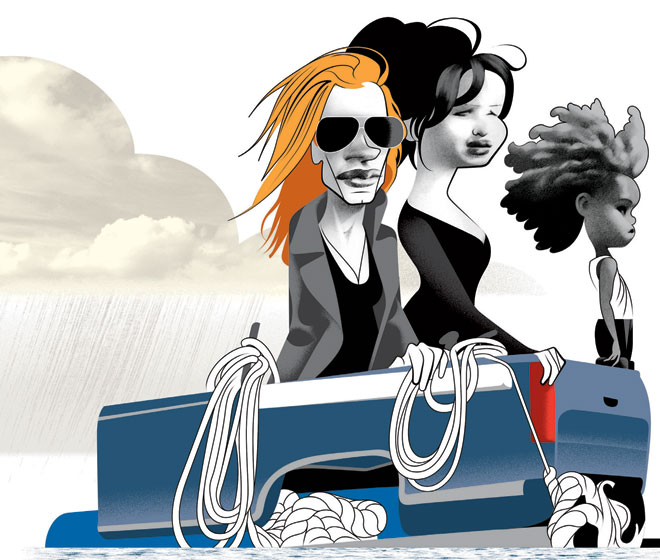 Often a performance can be judged not by a movie’s strongest moment but by its weakest, especially when it’s the picture’s crucial scene. In Silver Linings Playbook, Jennifer Lawrence is a young widow who deals with her grief by sleeping with everyone she (barely) knows, until her penetrating gaze settles on Bradley Cooper; and two thirds through the movie, when she bursts into Cooper’s living room reeling off football statistics in order to make a point to his gambler father—the setup or motivation isn’t important here—it isn’t any more real than a somewhat sophisticated sitcom. The scene is entertaining enough, even satisfying for as long as it lasts. But afterward you realize how much it feels written rather than lived, and the only thing that’s persuasive is Lawrence, who’s incapable of a false frame.

Ten years from now—or maybe I mean five or three—when she’s the biggest star in Hollywood, we’ll look back at 2012 as the time Lawrence crossed over from the realm of mere mortals. Playbook is her bid for a Best Actress Oscar, but if her other major film this year, The Hunger Games, isn’t the sort that the Academy Awards takes seriously, her performance in it is as impressive: As a competitor in a lethal reality show in a fascist future, Lawrence doesn’t just match her boundless emotional conviction with a commensurate physicality, she integrates the two, making one a seamless expression of the other. She manages to be more consistently genuine and more devoid of affect or mannerism than any young actress I can remember. This is true whether she’s conveying Playbook’s neuroticism, bringing depths that are beyond writer-director David O. Russell’s overpraised script without resorting to the clichés on which even talented actors rely, or whether she’s searching for her father as the matriarch-in-all-but-name teen of Winter’s Bone, the picture that put her on the map a mere two years ago. Among those under 30, or perhaps any age, Lawrence has become the go-to woman for roles that involve extreme behavior, furiously sweeping clear a diner table or frantically running a gauntlet of flying fireballs and industrial-strength wasps. Ruthless intensity isn’t the type of thing that audiences accommodate in female actors the way they do in the guys, so the extent to which it distinguishes Lawrence as both an actor and a star is striking. While such matters are in the eye (mine) of the beholder (me), Lawrence might be relatively innocuous with her common, forgettable name and her sullen, attractive-but-dime-a-dozen looks—she isn’t a Scarlett Johansson or Mila Kunis bombshell—but she tops “hot” lists these days anyway, and you have to assume it’s in part by sheer force of personality.

Lawrence is the most formidable of this year’s best actresses who are attracting attention in take-charge roles. For once, the men are prominently vulnerable: In Playbook, Cooper is a manic-depressive just out of a psychiatric institution; in The Master, Joaquin Phoenix is an unhinged war vet who can’t make it in a peacetime world; in The Sessions, John Hawkes is a poet who’s been paralyzed since childhood and wants to be rid of his virginity; in Flight, Denzel Washington is a drunken pilot who can land a crashing airplane but can’t manage a life in free fall. The 19th-century president who ends slavery and the Civil War is the exception that proves the rule. In the meantime Helen Hunt in The Sessions helps the paralyzed poet find his sexuality, Naomi Watts holds together her family in the face of a tsunami in The Impossible, six-year-old Quvenzhané Wallis emerges from a Katrina-type storm as a kind of tribal leader in Beasts of the Southern Wild, Kristen Stewart turns a familiar fairy-tale character into a warrior Joan of Arc in Snow White and the Huntsman, and Jessica Chastain tracks down the world’s most wanted terrorist in Zero Dark Thirty. If Anne Hathaway is the embodiment of pathos and helplessness in Les Misérables, like Lawrence in The Hunger Games she has in her back pocket something distinctly more badass as cat burglar Selina Kyle in The Dark Knight Rises.

Jennifer Lawrence is hardly old enough to warrant exhaustive assessment let alone predictions about her future ten years from now, or five or three. Way back at the dawn of the Obama presidency she was still playing guest slots and bit parts on TV series; these days she goes from strength to strength at the age of 22, and what happens next will depend on how she juggles risky indie choices with sci-fi blockbusters and superhero pictures and maybe a horror picture now and then (House at the End of the Street probably seemed a good idea at the time). At least one Hunger Games sequel is on the horizon as well as another X-Men. Meanwhile Lawrence is likely to be inundated with scripts about complicated women, hopefully not all of them unbalanced or troubled. Though I think she deserves the Academy Award, I confess there’s a part of me that’s rooting against her in this year’s race; though I’ve never believed that failure makes an artist better—whoever said that wasn’t an artist—I don’t doubt that too much success too soon will mess someone up. Nonetheless, along with determination and a simmering ferocity, Lawrence projects enough intelligence to be impatient with the whole star thing on the one hand, and on the other hand enough self-possession to not let skepticism metastasize into self-contempt. I accept it as a good sign for the moment that the only time she looks like she’s acting, and not very well, is when she’s smiling for the cameras on the red carpet. If she masters that, watch out.