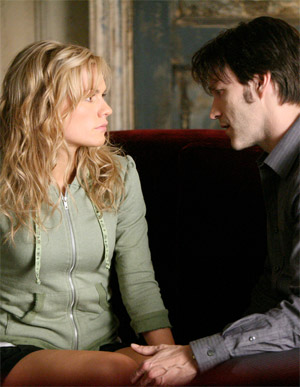 The vampire is a fantasy born of a time when sex was dangerous. Except for the years between the mid-1960s and the early 1980s, that’s been all the time, of course, and as the culture would have it, never more so than now. This month HBO’s True Blood begins its third season, continuing the adventures of orphaned waitress Sookie Stackhouse, who pursues an affair with her vampire lover while beset by an unwelcome talent for telepathy and maybe a few other exotic gifts that she’s still catching on to 24 episodes later. To mix my monster metaphors, True Blood is the Frankenstein of vampire stories. If it’s an assemblage of various books and movies and shows—the Southern gothic of Anne Rice’s Interview with the Vampire, the irony and postmodernism of Buffy the Vampire Slayer, the violent Americana and revelrous bloodletting (with their implied connection) of Kathryn Bigelow’s Near Dark, the undercurrent of barely constrained sexual hysteria running through Francis Coppola’s early-’90s interpretation of Dracula, and the catalytic attraction between a virginal young woman and an undead heartthrob trying to mind his manners in Twilight—True Blood’s erogenous zone comes from all of them.

The notion of a parasitic demon that survives its own death, trapped in an earthbound purgatory and feeding off the living, has been around since the Old Testament, but it wasn’t until the 1700s that the vampire fable took form. Somewhere in eastern Europe, in the wake of some plague or other, death moved too fast for the grave diggers to keep up, and people were accosted by the daily spectacle of what a mess the human body makes once it shuts down. Though in fact vampires were the stuff of literature at least half a century before Irish novelist Bram Stoker came along, showing up in the work of Goethe and Coleridge, Stoker’s The Undead, retitled Dracula on the eve of its publication at the hinge of the 19th and 20th centuries, is the obvious landmark. Dracula tapped into a British paranoia that doesn’t mean much to us now: Maybe less irrational than prescient, what with the Nazi siege 50 years later, the English were convinced that an onslaught of the Other, be it German, French, or an incursion that couldn’t be named, was poised to overwhelm their small island. But Stoker hit another Victorian nerve, too: the sexual repression of the age. Of course there’s been something sexual about the vampire all along—that Old Testament incarnation was Lilith in the Book of Isaiah, visiting men in their aroused, bed-tossed sleep to drink them dry—but whatever the precedent, with Dracula sex and death, the two hot wires of the psyche, were touched together and fused, and sex turned from life force into death force, oblivion rendered as orgasmic as it is annihilating.

As orgasmic as it gets, True Blood takes place in the torrid Louisiana swamplands. From F.W. Murnau’s Nosferatu in 1922 to Tod Browning’s 1931 Dracula and beyond, however, the vampire has largely inhabited frigid English, German, and Scandinavian nights, repression’s fever dream edging toward more explicit evocations of the forbidden. By the ’50s, the pictures coming out of the U.K.’s Hammer studio featured increasingly pneumatic actresses in ever-tighter bodices for undead aristocrats to ravish. It’s not an accident that the one period during which the vampire had little resonance for American audiences was the late ’60s and ’70s, a singular time in human history when, the stray venereal disease aside, sexual behavior was devoid of consequence. Labor and childbirth were no longer lethal endeavors, and with the widespread use of the birth control pill, pregnancy wasn’t a risk. Several millennia of value judgments attached to sex suddenly were less threatening, moral fears vanishing almost as immediately as the mortal ones; and during this era the filmmakers of more relaxed cultures—the Belgian Harry Kümel with Daughters of Darkness and the French Jean Rollin with The Rape of the Vampire, Lips of Blood, and Fascination—discovered the vampire story as a vehicle for pushing erotic expression toward the uninhibited, even the surreal. In the ’80s, AIDS restored peril to sex on an apocalyptic scale, and with 1987’s The Lost Boys, the vampire myth found a contemporary context in a frustrated adolescence that felt cheated of paradise. In Coppola’s baroque and slightly berserk 1992 Dracula, juices flowed, colors popped narcotically, and Gary Oldman portrayed the Count as a Baudelairean Rolling Stone the band kicked out because he was too weird. The shambles of its last third notwithstanding, it was Coppola’s best film since his ’70s heyday; without anyone noticing, it also was the most commercially successful vampire movie made up to that point.

True Blood had a mixed reception when it initially aired two years ago, before going on to become HBO’s biggest hit since The Sopranos. Created by writer and producer Alan Ball, its original contribution to the genre lies in the satirical: In an alternative America, vampires have “come out of the coffin” and now lobby for their civil liberties (including the right to marry the un-undead) to the dismay of the rest of the country, not least the populace of “Bon Temps,” where the series is set. Intolerance, legal quandaries, and esoteric social rituals abound. A synthetic bottled blood on which the vampire segment survives, presumably in lieu of slurping up the real thing, is carried in bars and liquor stores, and a drug called “V,” derived from blood drained from unwilling vampires, is the new illicit hallucinogen. An immigrant wave of supernaturals has overrun the landscape, like the local saloon keeper who can turn into a dog, and a vengeful Dionysian who casts the town under her spell (TV’s go-to ballbuster Michelle Forbes, seen a few years back in Battlestar Galactica as an interstellar Captain Bligh). Immature, disapproving, laying lots of trips on everyone else when she’s not screwing up things herself, our heroine Sookie is played so openheartedly and winningly by Anna Paquin that sometimes we almost ignore what a pain in the ass she is. Those familiar with Ball’s résumé won’t be surprised that, like Sookie herself, the show is all over the place tonally, by turns goofy and intense; Ball created HBO’s Six Feet Under, establishing his preoccupation with death, after writing the 1999 Oscar winner American Beauty. The best and most reliable thing about True Blood is its trashiness, and its one constant is that vampirism no longer is a metaphor for sex but rather the other way around. Starting with the title sequence—a montage of mortification and frenzy comprising images of naked bodies and crazed baptisms and slinky lap dancers and Venus flytraps and decomposing animals flashing by fast enough to be almost subliminal—True Blood has sex on the brain so much that when I watched the DVD recently on an airplane, I had to keep peering around to make sure little kids weren’t looking over my shoulder.