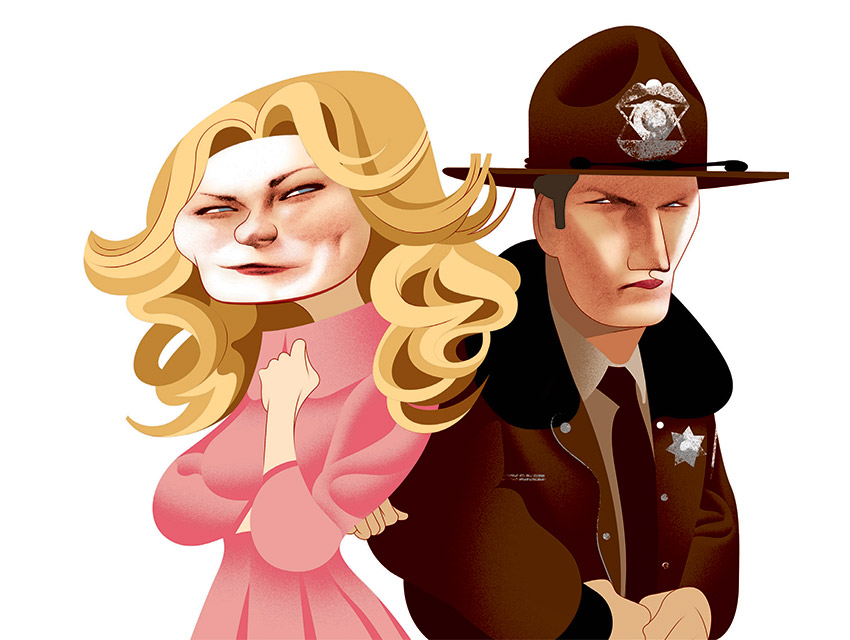 The most telling thing about Fargo, both the now-classic movie and the television series, is that it doesn’t take place in Fargo. The North Dakota city of the title is always the next town over from the white icy burgs, slashed with streaks of blood red, where Fargo’s stories actually begin and end—the “big city” that has a radius of seeping corruption. Nothing about the movie or the show’s two seasons quite stays put, except for the lives within that go nowhere; each incarnation has its own cast and self-contained narrative that seem adrift in time, identified by years whose numbers are as random as those in a game of bingo. Season one was the best TV show of 2014, and that the FX crime series hasn’t attained the same cachet or credibility as blue-chip HBO’s similarly formatted and markedly inferior True Detective is more evidence of just how the cultural establishment—meaning those of us whose job it is to bless the rest of you with our pronouncements—can be as bedazzled by the same hype as everybody else.

The mid-’90s film was writer-producer-directors Joel and Ethan Coen at both their snottiest and most expert. Patronizing every character, including the pregnant deputy heroine who investigates a kidnapping, the picture was nonetheless made with such skill that if you stumble on Fargo while channel surfing and watch as much as a minute, it becomes as irresistible as Casablanca. The first season of the TV series went farther and deeper, lurching from 1987 (when the movie takes place) to 2006. Establishing emotional connections the movie didn’t, it conveyed—by way of Billy Bob Thornton’s mesmerizing turn as a hit man—a menace altogether beyond the film’s Steve Buscemi, who was mostly alarming for how much he lost control of his own small-time venality and for how far at the end of his tether he was. Thornton didn’t have a tether to be at the end of. He was a dwarf star implosive enough to suggest that mayhem and scorched-earth mischief were a mandate ordained by some greater power, one we could only hope was fate rather than any god.

This year’s Fargo, flashing back to an anxious 1979 (and premiering tonight), has cranked up the same quirks of plotting and observation that have distinguished it so far. More outrageous things are in the first half of this season’s debut than in whatever 30 minutes of TV you care to recollect, including several spectacularly slapdash murders, an ill-considered hit-and-run, a Midwest crime family as unlikely as Vito Corleone and Livia Soprano posing for American Gothic, footage from a Ronald Reagan filmography that doesn’t exist, and a possible UFO visitation. Footnoting other Coen works with visual echoes of Barton Fink and No Country for Old Men (a long tracking shot through a hotel corridor, a door lock expelled from its place as if by Javier Bardem’s stunbolt gun), the second sea­son is equal parts last year’s sense of tragedy and the movie’s absurdity down to bits of its dialogue and the cockeyed, almost childlike perspective reflected by notorious rhetorical tics (“Oh jeez,” “OK then,” “You betcha”). If not as immediately gripping, season two is more ambitious: Besides the cinematic razzle-dazzle of dividing screens, shifting visual styles, and a relentlessly prowling camera closing in on its subject or pulling away from it—as though futilely trying to focus what’s doomed to be out of focus—a political subtext asserts itself in the opening scene, growing increasingly momentous with successive episodes.

If Fargo is about anything, it’s American madness. By this I mean madness that’s peculiarly American in its mix of surrealism and naïveté, violence and non sequitur, pushed to extremes by life in forsaken Minnesota hinterlands, where it’s not clear that reasonable people were ever supposed to live (as opposed to our Southern California paradise, constantly moments from being devoured by a massive seismic maw). Elitist as it must sound, the harsh truth is that most of Fargo’s characters—led by ding-a-ling vehicular manslaughterer Kirsten Dunst—have settled early on for torpor as life’s natural velocity and an inertia of spirit and vision as life’s natural meaning. You almost can’t help admiring the Gerhardt crime family that’s held together by Jean Smart as a steely matriarch; they have aspirations for themselves, even as those aspirations are ultimately empty and fulfilled by a terrible brutality, which is to say that what makes the Gerhardts more alive makes them less human, a paradox that also seems peculiarly American. This throws into doubt the nature of humanity itself, or at least humanity’s limitations in winter-strafed environs. Maybe in summertime everyone cracks the shells of their existence, but when you think over the collective 18 hours of Fargo in all its incarnations, you won’t summon up a single summery moment. It’s not that there isn’t one; it’s that if there is, it’s not one that matters.

In relation to the movie, the two TV seasons are like larger moons swirling around a smaller planet while laying claim to their own planethood. The show (of which the Coens are executive producers) has a humanity that only occasionally mocks, in the fashion of the film, the characters’ earnestness and eccentricities—the weird singsong of their speech and the dumbfounded regard they have for the frozen slog of their lives. The audacity of the current Fargo is that its place and happenings begin to resemble the vortex of a whole nation’s moral collapse, as seasons to come fill in the lines of a national history as secret as it is epic, rendering the faux “This is a true story” declaration preceding each episode that much more perverse. Resonant in the entirety of Fargo are the accumulating convergences: Oliver Platt finding in the snows of season one, 19 years later, the money buried there by Bu­scemi in the movie, and, in the second season, glimpses of six-year-old Molly, who will grow up to crack the first season’s case. Where season two’s forerunners appeared to psychically float outside time, the new season feels caught in the tendrils of history. Everywhere he goes, Patrick Wilson’s state trooper investigating the unfolding events of that first half hour before a presidential campaign’s agenda sweeps him up—drips the dread of his Vietnam experience; wars fought from Southeast Asia to Korea to Europe are a running conversation among the men in particular, who are haunted in ways they don’t fathom by Indian wars waged across the ice fields beneath their feet, where an entire people was wiped out by the American dream. Now in their own dreams, the survivors catch premonitions of their own extinction. Like nothing else that stays put in Fargo, every time they look, the next town over seems to have moved a little closer.

Are the Coen Brothers Done as a Directing Duo?

The Big Lebowski’s Most Memorable L.A. Locations, Then and Now