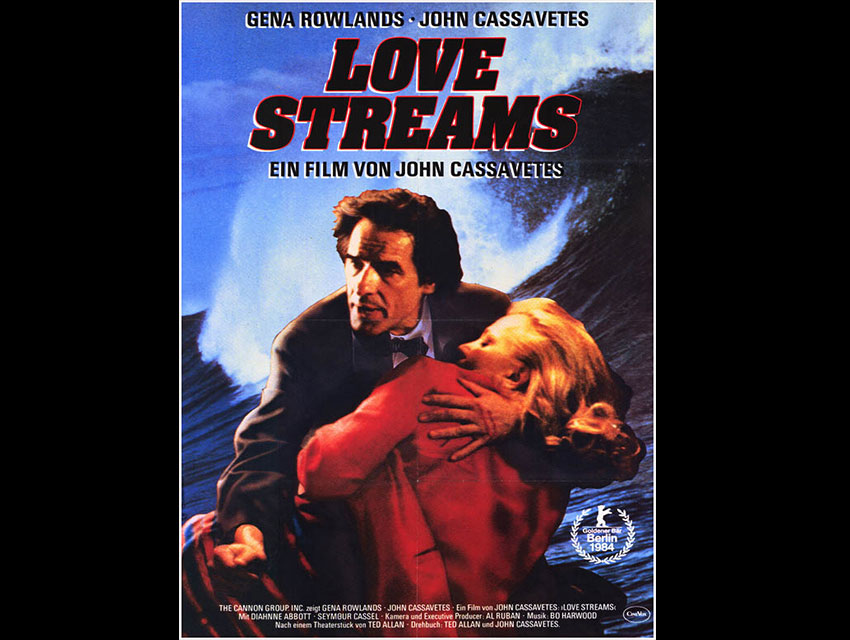 Asked if filming went smoothly as this movie was in production, writer-director John Cassavetes answered, “Who wants it to go smoothly?” Cassavetes did nothing more or less than invent the American independent film, with Shadows in the 1950s, Faces in the ‘60s and Husbands and A Woman Under the Influence in the ‘70s—financing them through acting jobs in mainstream ventures like The Dirty Dozen, Rosemary’s Baby, and The Fury, charting cinematic territory that no one else could see let alone map. Their lives spiraling downward, a man and woman we learn only belatedly are brother and sister have no choice but to turn to each other; made with Cassavetes’s favorite actress (and wife), the brilliant Gene Rowlands, shot in the shadow of a fateful prognosis that gave the director only five months to live (that turned into five years), Love Streams was the most audacious expression of the filmmaker’s heedless art: more fractured and surreal than anything he had done before, but every bit the same kamikaze plunge into the human heart.

In the documentary I’m Almost Not Crazy made by novelist and critic Michael Ventura (included with last month’s typically stellar Criterion DVD/Blu-ray release, to which Ventura also adds the sort of riveting and revelatory commentary that opens up not just a movie but an artist’s universe), a longtime associate recounts a screening of a Cassavetes film where the audience reaction was so positive that the shaken filmmaker radically recut the last half hour. He figured that if everyone liked the picture that much, there must be something wrong with it. Determining whether such an attitude was crackpottery, pathological iconoclasm, or an unyielding integrity may be pointless, a wallowing among distinctions without differences; complaints as to the apparent mess of his movies undoubtedly would be regarded by Cassavetes as a compliment, and any grounds for criticism, some of which are valid, finally are overwhelmed by the director’s courage. “Every Cassavetes film,” said his friend and frequent collaborator Peter Falk, “is about the same thing. Somebody said, Man is God in ruins—and John saw the ruins with a clarity that you and I couldn’t tolerate.”