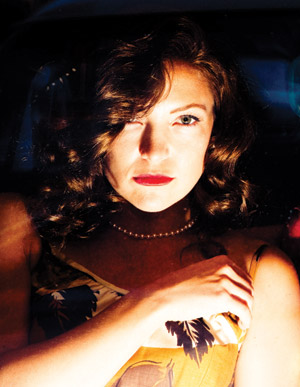 The Killer Inside Me arrives preceded by controversy. When it was shown a few months ago at the Sundance Film Festival, director Michael Winterbottom was confronted by more accusations than questions, the gist of which wasn’t so much why Winterbottom made his movie the way he did but why he made it at all. It wouldn’t seem possible to tell the story of a Texas sociopath—whose victims include two women with whom he’s involved in sadomasochistic relationships—without controversy; as star Casey Affleck pointed out to a British film magazine, the title of the film, in case you missed it, is The Killer Inside Me. It’s also safe to say that Winterbottom probably asked for trouble the instant he decided to film any novel by Jim Thompson.

Born in the early 20th century and coming out of the Dust Bowl, Thompson was the Philip K. Dick of noir writers. As with Dick and the science fiction audience, a lot of noir readers weren’t sure what to make of Thompson during his lifetime, and also like Dick, Thompson started producing more personal novels without success before turning to genre as a vehicle to convey the personal, not the least of which was his struggle to stay sane. Whether by Dashiell Hammett, James M. Cain, Raymond Chandler, David Goodis, Chester Himes, Charles Wil-leford, or James Ellroy, the best noir writing always has been as much about character as narrative, but never more than in Thompson’s work in the 1950s and early ’60s, in which protagonists routinely are on the verge of psychotic ruptures with reality. Vortexes of obsession and violence, Thompson’s novels are the unholy love children of Cain and William Faulkner; The Killer Inside Me’s Lou Ford, played in the movie by Affleck, could as easily be a Faulkner character as Faulkner’s Joe Christmas from Light in August could be a Thompson character. Except for Chandler, no one in noir has had as distinctive a voice as Thompson. Whereas Chandler, through his mean-streets knight Philip Marlowe, expressed what the author perceived or hoped was his nobility, Thompson—a hotel bellhop in his youth, procuring drugs and women for the guests—articulated the recesses with which he had more than a passing acquaintance. Savage Night and The Getaway plumb the nightmarish and unhinged, taking the crime novel into the surreal.

Thompson died in the late ’70s, unknown in this country. When I lived in Paris in the early ’80s, I had French friends who exclaimed with incredulity, “You haven’t heard of the great American novelist Jim Thompson?” By the end of the decade he was the hip noir writer whom everyone knew; and with an award-winning biography by the poet Robert Polito, Thompson became the sort of mini phenomenon that those in Hollywood find irresistible even when they don’t understand it. As much as Hollywood confounded Thompson in his fitful attempts at screenwriting—by most accounts he authored Stanley Kubrick’s The Killing and Paths of Glory, only for Kubrick to steal the credit—Thompson has confounded Hollywood back. American adaptations of books like The Kill-Off and A Swell-Looking Babe only fetishized Thompson’s nihilism when not, as in the case of Sam Peckinpah’s The Getaway, sidestepping it altogether. With a first script by Thompson, The Getaway went the way of Steve McQueen’s cluelessness: The actor’s career was faltering, and freaked by a Mexican desert-gothic finale similar to the book’s, McQueen jettisoned both the ending and Thompson for a conventional action movie. A remake with Alec Baldwin 20 years later was worse. The closest an American director has gotten to Thompson’s tone and intentions is James Foley with After Dark, My Sweet, released in 1990. That was about the time Thompson’s posthumous career as Hollywood’s hot writer peaked, with The Kill-Off the year before and The Grifters, directed by Stephen Frears.

Of all the adaptations, The Grifters most effectively translated to the screen the malevolence and strange seduction of Thompson’s vision. That it took a Brit like Frears to pull it off was indicative of how the Europeans have been more comprehending of the novelist’s dalliances with degradation and oblivion. This was most evident in the case of the French Coup de Torchon by Bertrand Tavernier, shot in 1981 just around the time my Paris friends were berating me for my literary ignorance, and successfully transposing Thompson’s Pop. 1280—yet another first-person tale of an amiable sadist—from the depths of Texas to pre-World War II colonial Africa. The attraction of Winterbottom, another Brit, to a pulp-culture landmark of sex and murder like The Killer Inside Me is only a surprise until you take into account a résumé that includes the brilliant BBC crime series Cracker, the pop-canny 24 Hour Party People, and the sexually besotted 9 Songs. Kicking off the 12-year streak during which Thompson’s best work was written, The Killer Inside Me is the author’s definitive novel, vividly distilling his sensibility: Ambling and apparently harmless, deputy sheriff Ford is a time bomb of libidinal rage and mayhem, driven to kill the women he loves, if that’s the word, and who love him. He is at once smarter than everyone thinks and dumber than he knows, a monster so far beyond any moral impulse that when Thompson feels compelled to try and explain him, it constitutes the novel’s one failure. Legends abound about various attempts to film The Killer Inside Me before and since a ’70s version starring Stacy Keach; shortly after its publication in 1952, Marlon Brando was supposedly set to play Ford, with Elizabeth Taylor as his longtime girlfriend, Amy, and Marilyn Monroe as his prostitute lover, Joyce. This casting is so mind-boggling that if the story’s apocryphal, as surely it must be, who would want to know?

Obviously anyone as committed as Winterbottom is to this material is bound to produce a movie that appalls people. If it didn’t, there would be something seriously compromised about it. Suggestions that the movie condones or advocates violence against women are preposterous, but questions of whether the violence is gratuitous are more complicated, as questions of gratuitousness always are, particularly given the carnal undercurrent that exists in the scenes with Affleck, Kate Hudson, and Jessica Alba. I suspect that the scenes of violence are all the more unsettling for the women’s passivity, and while Winterbottom can argue that toning them down would be worse—that they’re more ethical in their brutality than if they’re sanitized—it’s true as well that there’s a middle ground between the sanitized and the brutal, and that the violence probably would still make its point if there were 20 seconds less of it. There’s no getting around that the controversy distracts us from the movie and that the filmmakers have made choices that risk upending the movie altogether. Whether in fact trimming those 20 seconds would have mitigated the uproar is something only the intellectually honest can answer, and in such controversies, intellectual honesty tends to be the first casualty.

Is it incidental or irrelevant, then, to note that the movie is good? Overlooked may be the film’s virtues, which include—notwithstanding an ending that you can forecast within 45 minutes—the plot’s inexorable pull, a fidelity to the novel’s spirit, and Affleck, who gives the performance of the year so far. In movies like The Assassination of Jesse James by the Coward Robert Ford, Affleck’s modus operandi sometimes has been a skin-crawling obsequiousness so off-putting as to throw a movie out of whack, but in The Killer Inside Me he’s mesmerizing: childlike and ingratiating, right up to the moment he makes you cover your eyes. What the film loses of the novel’s perspective and black humor, it compensates for with Affleck’s sweet smile, here as scary as anything in recent cinema. Earlier in his life, before he followed his brother, Ben, into his current trade, Affleck aspired to be a physicist and philosopher, and in The Killer Inside Me he plays a man who has stumbled into the breach of humanity’s quantum mechanics, making himself at home and discovering within the void a perverse hospitality. This is the singular and fuliginous solitude that Jim Thompson knew, and with which the rest of us hope to never have a passing acquaintance.