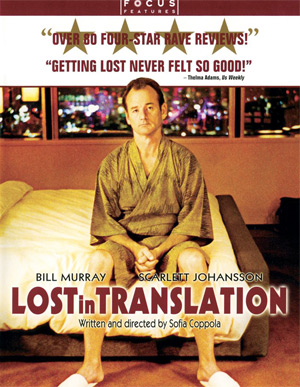 There was something rational about the 20th century, even at its most diabolical, maybe because so much of its madness was about ideology, which pretends to a kind of rationality. But the madness of the 21st century promises to be about theology, which finds righteousness in the irrational because that’s the test of devotion. Maybe this is why the most remarkable film and TV of the last ten years has been about the nomadic psyche and people at loose ends—trolls on a quest, lovers adrift in the unconscious, a Flying Dutchman sailing the stars, rogue CIA operatives in search of their past, lawmen and outlaws alike wandering the badlands, women samurai searching for justice and warrior swordsmen defying gravity. I know 10 is traditional, and I have a fondness for 12 (hours, months, apostles), but here are 13, in honor of a bad-luck decade.

Lost in Translation (2003)
13. This comic love story of a washed-up middle-aged movie star and an equally untethered younger woman was a breakthrough for everyone concerned, not least the kaleidoscopic city of Tokyo, starring as a romantic labyrinth. Bill Murray got his pathos in sync with his irony; on her way to becoming the decade’s bombshell, Scarlett Johansson gave her best performance; writer-director Sofia Coppola had the last laugh on all the cruel jokes about her since The Godfather Part III; and the throbbing dream-pop assembled and augmented by My Bloody Valentine’s Kevin Shields is one of the superlative soundtracks of the last 40 years. The film is haunted by Murray’s unheard whisper to Johansson amid the city’s bedlam, the Jesus and Mary Chain’s “Just Like Honey” rolling in from the future like a fog.

Deadwood  (Season One, 2004)
12. Created by NYPD Blue’s David Milch, this HBO series ran three seasons, losing traction as it struggled to survive. The first 12 episodes, however, have the urgency of a train robbery. A century after the Declaration of Independence, when men’s six-shooters do their declaring for them, Deadwood evokes a Dakotas that are both no-man’s-land and no-man’s-time, with Jeffersonian freedom in its anarchy and destruction embodied by Ian McShane’s profane saloon keeper. After countless portrayals over the years by William Hart, Gary Cooper, Charles Bronson, Jeff Bridges, and Josh Brolin, among others, Keith Carradine’s Wild Bill Hickok is definitive.

Kill Bill  (2003-04)
11. Oh, I know, when he starts talking, don’t you just want to stuff a sock in it? But for the Quentin Tarantino-phobes, with whose irritation I have sympathy, here’s the hard and undeniable truth: The man knows how to make movies. He has a cinematic sense like Brian Wilson’s melodic sense. This unhinged four-hour vengeance epic—released theatrically in two parts—about a bride (played with convincing ferocity by Uma Thurman) left not just at the altar but for dead on the church floor, conveys a tragic grandeur that only Jackie Brown hinted at.

24 Hour Party People  (2002)
10. No movie since A Hard Day’s Night (though 2000’s High Fidelity, another decade contender, came close) has so caught rock and roll’s spirit as this story of journalist-turned-avant mogul Tony Wilson (Steve Coogan), navigating the punk revolution from the Sex Pistols to the “Madchester” scene. Wry, moving, a little loony, and giving postmodernism a good name for 117 minutes, British director Michael Winterbottom’s film leaves you exhilarated and digging out the Joy Division CDs. Which of course bring you right back down to earth.

The Sopranos (Seasons Three and Four, 2001-02)
9. Inevitable. Debuting at the end of the ’90s and overrated in its early days by East Coast critics, losing its moral authority in Season Five before going out in that audacious cut to nothingness in Season Six, this series about a modern New Jersey Mafia family lived up to its reputation in the middle and achieved a kind of grace, albeit in shocking ways. Fittingly, the key moment is the most violent, when a pregnant young stripper is beaten to death by the man who may be the father, something that so outrages Tony Soprano, it sets in motion the unraveling to come. Just as these sociopaths began to get warm and fuzzy, creator David Chase reminded us who they are.

Crouching Tiger, Hidden Dragon  (2000)
8. Director Ang Lee took a lot of chances this decade, most notably with 2005’s admirable if finally unpersuasive Brokeback Mountain and 2007’s Lust, Caution, a last tango in Hong Kong that might be a classic if it weren’t too devastating to ever watch again. This remains his best movie, for the way it synthesizes East and West to produce a wuxia fantasia for the 18th century that set a tone for the 21st.

The ‘Bourne’ Trilogy  (2002-07)
7. Life’s too short to spend any of it trying to decide whether the first film (Doug Liman’s The Bourne Identity) or the second (Paul Greengrass’s Supremacy) is superior, especially when the third (Greengrass’s Ultimatum) does a nifty job of wrapping up the story. But this saga of a renegade amnesiac spy showed that other secret agent, the British guy with the three digits, how it’s done, and it bears remembering what a counterintuitive masterstroke it was to cast Matt Damon. Twenty minutes into Bourne, when Damon reflexively dispatches a couple of Zurich cops in two blinks of an eye, he’s more surprised than we are, which is only the trilogy’s first thrill.

Demonlover  (2002)
6. Gladiator’s woman behind the debauched throne, Connie Nielsen, who is caught between calculation and conscience in that film, grows up in this to become a ruthless executive taking over a mysterious Japanese corporation sometime just beyond the present. Somewhere just between David Lynch’s 1997 Lost Highway and Michael Haneke’s 2005 Caché, and more extreme than either, Olivier Assayas’s tale of corporate espionage (power) and voyeurism (sex) makes less literal sense rather than more as it unfolds, and in so doing distills the tensions of our time. Hieronymus Bosch for the cyberage, and the great lost movie of the decade.

The Wire  (2002-08)
5. With no concessions to showbiz, choosing authenticity over entertainment every time, David Simon’s inner-city chronicle entertained anyway, assuming you could get over that I’ve-seen-the-future-of-America-and-its-name-is-Baltimore feeling. After an exemplary B-plus opening that laid the groundwork, the show took off in its least typical season—the second—when it moved from the druglands to the wharves, where even the sea offers no escape. The entire series is too powerful to get picky about it, but I must admit that after Season Three there’s not quite enough of Michael K. Williams’s gay gangsta Omar Little (one of the great characters in the history of television drama) to make up for the abrupt and lamentable departure of Idris Elba’s Stringer Bell (one of the other great characters in the history of television drama).

Talk to Her  (2002)
4. Like a Spanish Fassbinder with a sense of humor, Pedro Almodóvar makes movies that are a mess, but in this—his masterpiece by a long shot, about men trying to communicate with the comatose women they love—everything comes together. It’s self-assured enough not to try and measure the emotional unquantifiables, in a story about the secrets we’re entitled to keep even from those we love, and the secrets that, kept from those we love, constitute a breach of faith. The heart won’t be denied its place in the craziest of centuries.

Sexy Beast  (2000)
3. From 2000’s Snatch to ’08’s InBruges, the Brits invented a 21st-century noir that so tipped to the dark side the scale between glamour and nihilism that all you could do was laugh. Ray Winstone is a retired gangster living the dream in Spain, sunbathing in his pool, when there comes rolling down the hill above him a boulder that portends the arrival—from Winstone’s old criminal life in London—of the psychotic Ben Kingsley in one of the decade’s most electrifying performances. Kingsley is as original, funny, and scary as the rest of the movie, with its enigmatic title that might refer to either of the two men or, for that matter, Winstone’s ex-porn-star wife, smartly played by Amanda Redman, the film’s true hero (if there is one).

The Lord of the Rings  (2001-03)
2. Seeing it again with my kid in its 12-hour DVD version convinced me that you don’t have to be into Tolkien (never read him) or fantasy (I drew the line at elves in my movies a long time ago) to realize the astonishing scope of director Peter Jackson’s accomplishment. Lifting CGI to the level of lyricism by yoking it to age-old concerns of character and narrative, Jackson understands, in a way that George Lucas, for instance, never did, how a story achieves the dimensions of myth by exacting a price on those living it and maybe those watching it. The one absolute certainty of this list is that 50 years from now, Rings will be regarded as a landmark.

Battlestar Galactica   (2003-09)
1. More than any other series, this felt like a whole by the time its 50-plus hours were over, without the usual season and a half of wheel spinning that afflicts the boldest and most imaginative shows (Lost). Unlike Star Trek at its most sophisticated, Galactica is never for kids: Guided by writer-producers Ronald Moore and David Eick, it’s an adult drama in which people drink, drug, frak, and radiate destruction around them in the name of defining what’s human—and after it addresses passion, despair, betrayal, and commitment, it also has something to say about democracy and oppression, religion and skepticism, tolerance and bigotry, and angels better and worse, without offering a single easy answer. Exciting, sexy, funny, subversive, unpredictable, shattering, philosophical, profoundly unsettling, upending the ways it’s informed by 9/11 and darker than any show west of, well, Baltimore, anyway, this is not just one of the all-time triumphs of its genre in any medium—as estimable as 2001, Blade Runner, or the collected works of Clarke or Dick or Sturgeon—but as good as any American television ever.