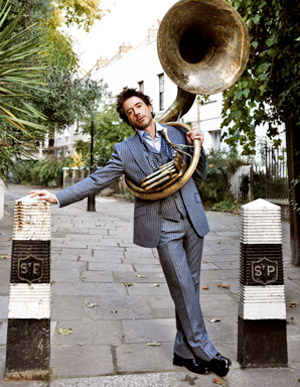 Robert Downey Jr. grew up in the crosshairs of show business and bohemia. His father was an “underground” filmmaker in the ’60s (when the underground implied revolution in the streets), most notably of the “countercultural” Putney Swope (it was an era that lent itself to quotation marks). The son has told stories about Dad offering him a joint when he was eight. It’s hard to know whether Downey has a sharper understanding of life’s absurdity because he grew up this way or whether, because he grew up this way, he has no understanding of real life whatsoever; either could account for his congenital irony. In any case he seems to find himself as ridiculous as he does the world around him. A huge part of his appeal is his lack of self-pity; even as he was a walking tabloid for years, he won us over with a manner that said, “Hey, I’m a fuckup, and it’s nobody else’s fault.” Downey is a hipster, if a complicated one—people assume his politics, for instance, are liberal when they’re conservative—but then most hipsters who have more going for them than their hipness are complicated, and since Downey always has had much more, neither the audience nor the Industry could ever give up on him. After passing through Saturday Night Live, that way station for most of the wise guys (and gals) of his generation, he established his talent in 1992’s Chaplin, an otherwise misbegotten biopic with Downey as the 20th century’s first superstar.

Downey has that thing no one can quantify but everyone recognizes, which is star power. He weds his skill to a charisma that a better actor like Philip Seymour Hoffman doesn’t have, which means that onscreen he wins half the battle by just showing up; every performance is bound to reinforce a personality we already love or surprise us by upending our expectations.  Downey surprised Hollywood last year as a comic book hero, a casting decision that initially seemed perverse. But Iron Man also was about redemption, which made it typecasting after all, and Downey had it both ways, which even the best actors can rarely have but which stars who can actually act have all the time. Immediately it was clear Downey’s involvement was a counterintuitive masterstroke, and Iron Man, based on one of Marvel’s dullest comics, proved to be in the tradition of Tim Burton’s late-’80s smash Batman, where another passé character was resurrected by another wise guy, Michael Keaton. In Tropic Thunder Downey played an Aussie in blackface; it’s hard to think of another actor with the ability and sensibility to pull it off. Similarly, if to different effect, in Zodiac Downey’s combination of intellect and relentlessness made him a more credible newspaperman than any hipster has a right to be. David Fincher’s best film, Zodiac was less about a serial killer than about the obsession of those determined to find him, more Crime and Punishment than Silence of the Lambs.

Now, in The Soloist, Downey is a newspaperman again, befriending a onetime prodigy (Jamie Foxx) who wanders the L.A. traffic tunnels that are like the grid of his schizophrenia. Waiting in vain for a rendezvous, Downey tells us it’s not a story when someone doesn’t appear, but of course it is. Sometimes the not showing up is the most important story, as long as someone else is there to note the absence and its implications. Brit director Joe Wright’s follow-up to Atonement, The Soloist can’t help inviting bathos; it has all the elements of a liberal fairy tale Stanley Kramer would have loved—the white man of influence who’s incapable of any sort of commitment but finds he’s compelled to save a destitute black man who’s part genius, part mad.  Downey drinks all the time and dances alone to Neil Diamond songs because, you know, all writers are like that, wacky and eccentric and out of step when they’re not staggering from the vino. A few things rescue The Soloist. First, the story is largely true, based on a series of columns (which turned into a book) by the Los Angeles Times’s Steve Lopez about his relationship with street musician Nathaniel Ayers. Second, the movie has the good sense to disregard Downey’s own advice about storytelling: What doesn’t appear is the final cliché. There’s no climactic moment of Foxx playing his cello to cheering throngs at Disney Hall. The movie concedes that sleeping in a bed in a room with a door that locks is as grand a triumph as one can hope for.

At The Soloist’s center is another movie, about Los Angeles itself. Except when it tries to get all Hieronymus Bosch on us, The Soloist at its best is a portrait of L.A.’s not-so-secret homeless population just blocks from the L.A. the rest of us know. Downey’s character is a transplanted Easterner, having come west from Philadelphia in 2001, and he has for his new home a convert’s furious love. “You can’t fix L.A.,” his ex-wife (played by Catherine Keener) tells him, but he’s driven to tell the city’s every story. More than anything else The Soloist gets by on its two leads, who are better than their film. Foxx is impressive as the tormented, rattled, occasionally frightening Ayers. Downey’s role is more conflicted and challenging. Functioning as the audience’s surrogate, he is our guide to a city’s—and a schizophrenic’s—labyrinths, while also preserving the integrity of his own character and the singularity of his idiosyncrasies.

As he’s noted himself, in his breakthrough role as a druggie rich kid in Less than Zero, Downey played his own future, though of course he didn’t know that at the time.  Having had to grow into his future and deal with its consequences, as most of us are busy just trying to grow into our present, the hipster has taken on complexities and moral depth with the doggedness of someone who realized he didn’t have a choice, even when playing comic book characters. Push far enough the intellect, relentlessness, and obsessiveness of a good newspaperman and you get the original superhero, Sherlock Holmes, so you can see why director Guy Ritchie thought it made sense to cast Downey as the detective in the update coming out later this year. In The Soloist Downey runs into the limits of wiseguyness that his characters previously brushed up against. Paradoxically, the same sentimentality that threatens to undermine the movie also makes Downey’s performance more naked and offers him new emotional chances to take as an actor—which, in turn, makes the movie more powerful. Downey gives The Soloist permission to indulge itself, by virtue of his irony, of everything he’s earned as a fuckup, and of what he has vindicated since.