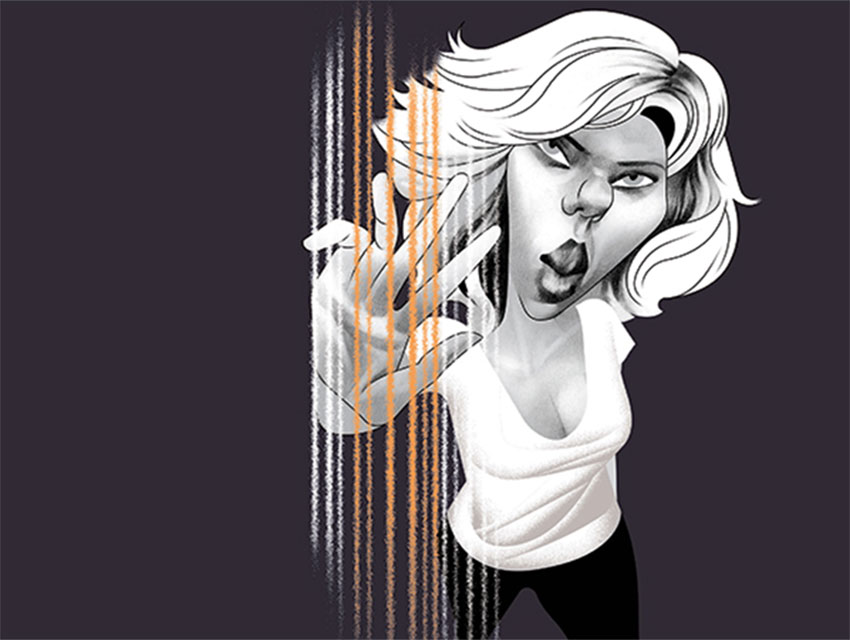 Scarlett Johansson has a smile she tries to suppress in every movie she makes. She’s been trying to keep a straight face since she appeared with Bill Murray 11 years ago in her breakthrough, Lost in Translation. The smile is there whether she’s splitting with boyfriend Jon Favreau so he can follow his dream of making Cuban sandwiches in this summer’s Chef, or whether she’s seducing a guard before beating the hell out of him in the paranormal thriller Lucy. Transformed by an experimental drug that’s been sewn into her body for the purpose of moving it across international borders, Lucy may access that 90 percent of the brain no one uses, rearranging time and place with the wave of a hand. But Scarlett hasn’t forgotten the 10 percent where her Mona Lisa smile resides.

Johansson has been a star for more than a decade, so if Lucy is her first blockbuster in which she’s not a sidekick or someone’s endangered girlfriend, that says a couple of things. It says that Johansson is often perceived as more at home in the indie likes of Chef or Lost in Translation not to mention the recent Her or Under the Skin, and that she’s still evolving as an actress. She’s having a Moment at the moment, in five very different movies in the last eight months; a former child actress who made her first impression on audiences in The Horse Whisperer at the age of 13, Johansson turns 30 this year, and nobody would be faulted for assuming that her career has passed its expiration date, especially since figuring out just how good she is has gotten harder rather than easier. She was somnambulant in a lot of her younger roles, inventing the Kristen Stewart School of Sullen Adolescent Acting before Kristen Stewart did. Anyone watching 2001’s Ghost World, in which Johansson was Thora Birch’s best friend, would have picked Birch as the one going places (Thora, I haven’t given up on you). Lost in Translation, however, was a revelation, with Johansson making Murray better in every scene of his Oscar-nominated performance; she should have been nominated, too. This was followed by a string of movies in which she was less impressive—or no more so, anyway, than the vehicles themselves, such as 2005’s Match Point, where our unease was compounded by 70-year-old director Woody Allen’s typically palpable lust for his half-a-century-younger leading lady (even if Allen isn’t actually in the movie).

Oh yeah, news flash: Scarlett is hot, by which I don’t mean only in the professional sense. If nothing is as fleeting as one’s hot status, Johansson’s appeal remains persistent enough that she lays claim to being the 21st century’s reigning sex symbol thus far—unless it’s Jennifer Lawrence, with whom she has in common blondness, a laryngitis voice, and a body admirably defiant of the age’s anorexia. At the risk of getting disingenuously cerebral about it, talking about Johansson without taking the Sexiest Woman Alive stuff into account doesn’t make sense, even as some might unfairly argue that, but for the Sexiest Woman Alive stuff, we wouldn’t be talking about her at all. The sex symbol title certainly has cut both ways for her, having reportedly cost her the lead in last year’s Gravity, for which she lacked Sandra Bullock’s, well, gravitas, and in David Fincher’s American adaptation of The Girl with the Dragon Tattoo. Nonetheless the director of Lucy, Luc Besson, is an imagist who brings visual panache to the most routine genre picture, and the possibility can’t be discounted that he had the same eye for Johansson, as both a filmmaker and a male, that he had for Anne Parillaud, Natalie Portman, and Milla Jovovich in La Femme Nikita, Léon: The Professional, and The Fifth Element.

Paradoxically Johansson’s two sexiest roles include her most offbeat and one in which she doesn’t appear onscreen at all. This past spring’s Under the Skin divided audiences; the smartest of dissenters, who may still be challenged to try and forget the movie, find the ambiguity of the story more half-baked than mysterious. For fans, of whom I’m one, originality and boldness of vision warrant the slack I’ve been cutting director Jonathan Glazer since Sexy Beast, the title of which refers to Ray Winstone if not Ben Kingsley. In Under the Skin a black-haired Johansson uncannily suggests a sexy beast, or alien, or the personified id of a cyberconsciousness (such as she portrays in Spike Jonze’s Her) who’s adopted human powers of seduction like a chameleon blending into a new landscape. As she lures men into a strange house and the oozy shellac that swallows them up, her nakedness, lit per the film’s atmosphere, is narratively functional enough to render irrelevant considerations of whether it’s flattering; her body isn’t sleek or sculpted, and esteemed film historian David Thomson has even argued that she looks outright “bad,” though you could have fooled me. Her, on the other hand, reduces Johansson to a voice, if “reduced” can be the right word for her finest performance. While we don’t see her, she’s never been more beguiling than as an operating system with whom Joaquin Phoenix falls in love. One of last year’s best, Her is also a cheat: Phoenix having sex with his software is a little less weird when we know the software is the Sexiest Woman Alive. Thus Jonze exploits his actress’s desirability without appearing to, since from the film’s standpoint her face and body don’t exist except in our imaginations, where we couldn’t not see Johansson if we tried.

Maybe each decade of Johansson’s career represents a new metamorphosis. Still a duckling mid-swan in 2003, she became a celebrity, so now the question, amid magazine covers and leaked online footage and the IMDb list of hottest this and hottest that that goes on till your eyes roll back into your head, is whether this decade will be the one she became an actress. Captain America: The Winter Soldier, in which she plays some bird/insect/animal-nomenclatured superperson (the name escapes me), isn’t likely to provide an answer, nor does Chef or Lucy, nor will next year’s Black Widow (all right, you knew the name didn’t escape me). Scarlett Johansson, however, gives half a brilliant performance in Her and half a brilliant performance in Under the Skin—one all talk with no physicality and the other exactly the opposite. Both add up to a single performance more brilliant than many actors give in a lifetime. If Lost in Translation wasn’t a fluke after all, then interesting filmmakers will continue to see something more in her than is revealed by taking off her clothes or concealed by a Mona Lisa smile.

The New California Dream Is in Portugal