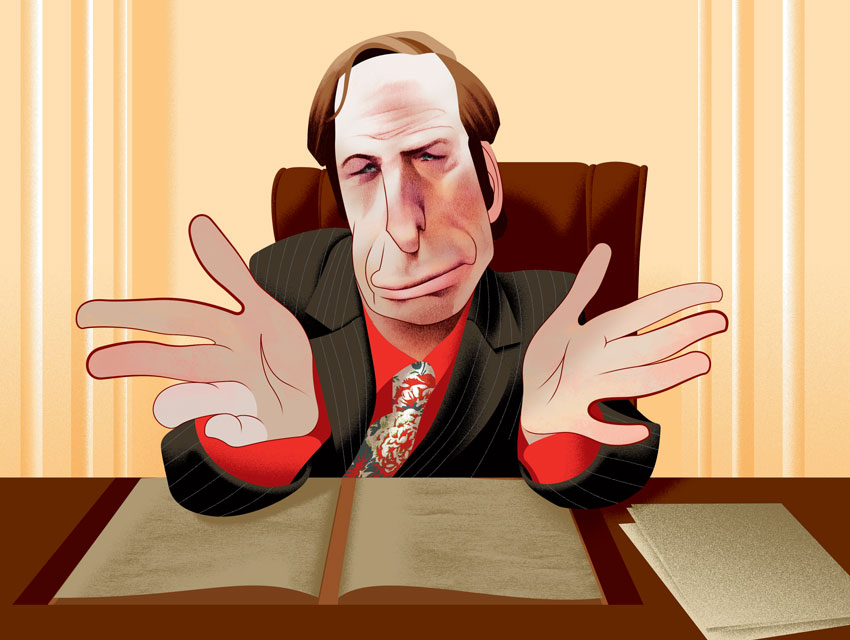 When Saul Goodman appeared in the second season of Breaking Bad, the first thing we found out about him was that his name wasn’t Saul Goodman. “Jimmy McGill” didn’t have the right ring for a lawyer, so his exhortation to clients and coconspirators alike—“It’s all good, man”—became an alias before an identity. One of those attorneys you see on the back of a park bench advising that you “better call Saul” should life take a funny turn and you wind up cooking a lot of crystal meth, Goodman originally seemed like somebody in whom smarts and ethics are locked in a death match, with both losing. But like everyone else in Breaking Bad, he grew more complicated as the series went on, with the character’s popularity such that the show’s creators brought him back on a regular basis. Saul was just sharp enough to realize when one of his clients, Walter White, became too hot to handle and just insightful enough to realize, before most of those around him, where things were headed when White increasingly found himself in the cross fire between drug cartels and the law. In the opening minutes of AMC’s spin-off series Better Call Saul, Goodman is working at the Cinnabon of his nightmares in Omaha, winding up almost exactly where he anticipated when White—and Breaking Bad—died in a ballistic blaze of redemption, or as close to redemption as the show’s creator, Vince Gilligan, was going to allow.

Gilligan is television’s writer of the moment, at least until David Simon (The Wire, Treme) comes up with another series. If the essence of character in any interesting narrative is contradiction, then Gilligan has built whole sagas on this principle, which is to say he tells resonant stories about people in the grip of warring impulses. Walter White isn’t only the best example in the history of Vince Gilligan but of TV: a good man who, desperate and with nothing to lose, empowers himself in ways so bad as to call into question how good he was to begin with. Breaking Bad ’s dramatic success was born out of the integrity of the main character’s construction—not to be confused, obviously, with the integrity of the character himself—by Gilligan and actor Bryan Cranston; more breathtaking than Breaking Bad ’s twists and turns was its willingness to constantly test the audience’s affections. Gilligan finally was even less forgiving than the rest of us who watched one season after the next as White crossed one line after the next, usually trying to pull others along with him, Saul included.

I don’t know for a fact, but I feel fairly certain that the first person who described a movie as “character driven” had to have been a producer or studio executive. There was a time when calling a story character driven was a redundancy, because it went without saying that any story worth telling was driven by its characters. That godfather of the modern action blockbuster, The Godfather, is entirely character driven, propelled by the transformation of a crime lord’s youngest son, who breaks bad when he evolves from white-sheep war hero to blood-soaked inheritor of his father’s empire. The instant that movies became described as character driven was the instant when characters stopped mattering in movies. In other words, the birth of the notion of the character-driven movie coincided with the birth of movies in which characters were incidental to the very activities in which they engaged. To be sure, movies (as opposed to novels) always have traded in the archetypes of dream and myth, figures who embody the shorthand of our subconscious. This didn’t preclude the presence of the contradiction that forges moral paradox: Charles Foster Kane in Citizen Kane can’t comprehend that love only on his own terms is no love at all; Ethan Edwards in The Searchers can sanctify a memory only by killing the innocent girl who is its source; and The Godfather’s Michael Corleone could give Walter White lessons in destroying a family so as to “save” it.

Lately writers have started abandoning movies because movies have abandoned them. You can’t blame movies for embracing spectacle; filmmakers since D.W. Griffith and Cecil B. De Mille have loved spectacle, and spectacle is something that movies convey like no other medium, especially in a digital age. I had rather a good time at the Wachowskis’ most recent fiasco, the big, bright, dazzling Jupiter Ascending, but I still wonder why one-tenth of 1 percent of the nearly $200 million budget couldn’t have been spent on giving its title character so much as a quirk let alone something lively to say; when last summer’s Guardians of the Galaxy exhibited a modicum of wit, you would have thought it was Noël Coward, given the critical response. Particularly in American movies, where there’s so much money involved, writing has come to be perceived as antithetical to a medium that engenders literary delusions among its auteurs: It’s one thing that the Wachowskis and Zack Snyder and James Cameron fancy themselves writers; it’s another when directors who once really were writers, like Michael Mann, now barely make the effort. But a TV series isn’t going to get from one season to the next without characters both persuasive and consistently irresistible, so in TV there’s a premium on writing until—as with movies—money takes over. The better looking that Boardwalk Empire got, the more its story tropes felt recycled and cynical.

There are a lot of reasons that Better Call Saul is the best American series since last year’s Fargo. Its insistence that viewers bring their brains with their eyeballs verges on the pitiless: No show has been so contemptuous of linearity or so brazenly shuffles time (what opens as a sequel to Breaking Bad in fact becomes a prequel). Breaking Bad fans will delight in Jonathan Banks’s return as henchman Mike and a major player in the series, along with Raymond Cruz’s Tuco; can Giancarlo Esposito’s Gus Fring be far behind? Finally, however, Saul Goodman triumphs as a creation of character—by Gilligan, actor Bob Odenkirk, and Peter Gould, who wrote the original Breaking Bad episode from which the new series takes its name—that is richer than anybody in American film this past year short of Birdman’s over-the-hill actor (played by Michael Keaton), with whom Saul/Jimmy shares a palpable desperation. As the loser lawyer careens among the debut season’s crises, you get the feeling that maybe Odenkirk has tapped into his years of zigging and zagging from stand-up routines to Saturday Night Live writing gigs to near-miss casting in The Office, the agitation of ever-elusive fulfillment lying behind his bravado when he talks too much, which is all the time. Two-thirds of the way through this season, as much to his own astonishment as ours, Jimmy finds himself doing the right thing for once, a vindication that sends him back to failure and leaves him sobbing with rage on the floor of the spectacular new office that we know he’ll never have. We also know he may never do the right thing again, yet another reason for his anguish that contradicts the first reason. In Hollywood these days, such a scene is called character driven. The rest of us call it true.