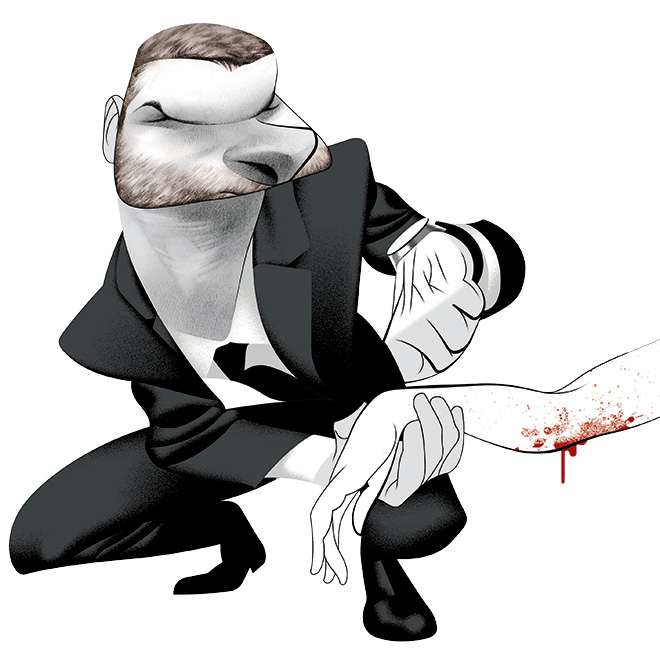 The most compelling character in Showtime’s series Ray Donovan steals every scene it’s in, and that’s the buzz of Donovan’s cell phone, constantly going off and bringing trouble. As the creators of the show—about a Hollywood fixer cleaning up movie stars’ messes while navigating the shadows of his past—considered what sound Ray’s mobile should make, did their options include the crunching of skulls from his favorite means of persuasion, a baseball bat? The opening chords of The Sopranos theme? The satanic gurgle of possessed girls in the 1970s horror classic The Exorcist, reminding Donovan of his childhood abuse by Catholic priests? In the end the producers went for the buzz: flat and emotionless, its tonal neutrality growing ever more ominous. Played by Liev Schreiber, Ray prides himself on his control, but by the debut season’s conclusion, with his cell vibrating incessantly, we could feel him fighting off a sullen panic as matters around him unraveled.

A few minutes into the second season, the phone is buzzing again, interrupting a therapy appointment. Seeming to come from the psyche rather than any personal technology, by now the buzz is the most expressive thing about the implosive Donovan. The therapy session brings to mind Tony Soprano, as does—also appearing in the new season—a beckoning dolphin, more seductive, to be sure, than the jabbering fish that tormented the Jersey mob boss. On the one hand, comparing Ray Donovan to The Sopranos is a bit unfair: If any drama that has a dysfunctional family at its center is a rip-off, then half the dramas of the last 100 years have been ripping off Ibsen and Tolstoy. On the other hand, a rebellious older daughter, a clueless younger son, a wife who can’t stand the secrets but doesn’t mind the lifestyle that secrets buy, and a father-husband who has a lethal relationship with one of his parents and lives a clandestine life, all cohabiting in the suburban obscurity of a faux-mansion—well, what family did you last see on TV that sounds like this? Ray Donovan’s variations on The Sopranos are that the suburb isn’t New Jersey’s North Caldwell but Calabasas, where everybody is Kardashian-lite, which is to say translucent; that Ray has three deeply damaged brothers who have a dynamic of their own, in and out of a boxing ring that’s been the only place to feel like a home; and that, next to Tony’s galactic fireworks, Ray is a dark star collapsing in on itself.

Unless you count the cell phone and the fine, never-a-false-move British character actor Eddie Marsan as brother Terry, Ray Donovan is a showcase for Schreiber and, playing Ray’s father, Jon Voight. Mickey Donovan’s sons have missed him, framed him, loved and hated him, and tried to have him killed, none of it without some justification; within an hour of his release from prison after 20 years, Mickey murders the priest he believes sexually abused his sons, to make up for not having stopped him when he could have. (His victim turns out to be the wrong priest.) Dad Donovan is a walking storm warning, threatening havoc everywhere he goes, and he fascinates us because we can’t be sure if the havoc is part of a plan. At the close of the first season, we were still wondering whether, among the bullets real and metaphorical that Mickey has been dodging, his two decades behind bars might have been the biggest dodge of all. Given this, Voight is apt casting. He’s a strange actor, never one whom audiences warmed up to, even when he was conveying bewildered innocence as the gigolo in 1969’s Midnight Cowboy, his breakout role; Voight gives his most convincing performances—the charismatic and unhinged bank robber of 1985’s Runaway Train, for instance—when his characters are missing a chip. The aging criminal in Ray Donovan, beating his sons and calling them liars for complaining about molestation in the parish hallways, has more credibility than the actor’s Pope John Paul II in a 2005 miniseries. Like a lot of fine actors, Voight has an intelligence more intuitive than smart; just when Mickey’s buffoonery peaks, his eyes narrow and we glimpse the nocturnal grinding of wheels we didn’t realize were there.

Schreiber is a different kind of actor, cerebral even if Ray isn’t a cerebral sort. He doesn’t have the movie star looks or personality that Voight has displayed intermittently during his career, and though the series has been a hit, it’s hard to know if TV audiences coming to Schreiber for the first time in Ray Donovan responded to the magnetism or accepted the menace. Those familiar with him from the 2004 remake of The Manchurian Candidate or his remarkable incarnation of Orson Welles in RKO 281, or his Tony Award-winning work in David Mamet’s Glengarry Glen Ross, are aware he’s a thinking actor who can handle the words that Ray Donovan doesn’t say and the ideas that he so deeply banks. If you squint hard, you can almost imagine Voight and Schreiber, with their wide faces, looking enough alike to be father and son; but whether it was the actors’ intent, which seems unlikely, or that of the show’s creators, which is possible, the clash of acting styles has served to underscore their characters’ alienation from each other. Who knows? Perhaps Schreiber got a few pointers working with Voight’s estranged daughter, Angelina Jolie, in 2010’s Salt, or maybe he already knew enough from his own reportedly unstable mother, who raised him in yoga tunics and banned him from watching color movies.

To give credit where it’s due, the relationship between Ray and Mickey has had about it complexities beyond what we saw between Tony and Mama Livia. In the early episodes of the first season, the narrative felt gripped by a dramatic logic that dictated only one of the two could survive their conflict; since the show is called Ray Donovan, betting on Mickey would have been playing the long odds. Then at some point maybe one of Ray Donovan’s writers grasped that, as in the case of Aaron Paul’s Jesse in Breaking Bad, who originally was scheduled for an early demise, dispensing with Voight wasn’t such a great idea, dramatic logic be damned. So last season’s final moments left Mickey sitting with his other sons on the sofa watching TV while Ray lay on the beach soaked in another man’s blood. In the opening hour of the new season, a lot of the unraveled ends that Ray thought he had tied up are unraveling again, with Mickey, exiled in Mexico, the one who can retie them. The relationship that, before, felt grandly tragic has become existential, defined by a potentially interminable push-me/pull-you between father and son and the buzz of communication that’s been dangerous so far but risks becoming tedious. Mickey and Ray have a lot to answer for, to themselves and to each other. But they’re too far outside the zone of any redemption that anybody would consider reasonable, which means only an unreasonable redemption lies barely within reach.