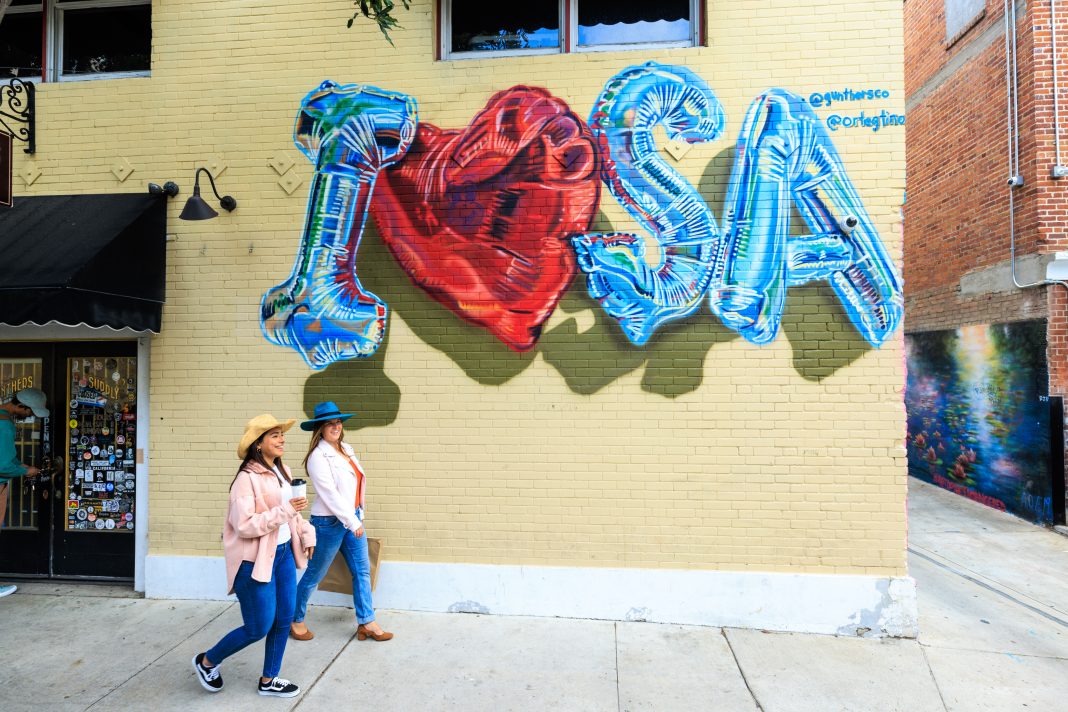 Founded more than 150 years ago, Santa Ana is one of California’s oldest cities, yet it never seems to show its age; there’s always something happening. Art? Sure. But do you want art museums, art walks or art workshops? Restaurants? Cool. Are you looking for traditional favorites, innovative newcomers, exciting food halls–with old-school arcades thrown in for fun–or popular food festivals celebrating the likes of vegan fare, holiday tamales, or craft beer?

Locals like to say that no one knows how to celebrate like Santa Ana and, indeed, there’s so much going on in and around the centrally located Orange County city–from family destinations to unique experiences–that it’s enough to make a visitor want to dance … which they can do at the city’s weekly public, outdoor dance lesson/dance party events.

Those dance events happen every Saturday on the Plaza Calle Cuatro, with each evening featuring a particular style, everything from Cumbia to Salsa to Bachata, kicking off with an hour-long lesson from 6-7 p.m. and then a dance party from 7-10 p.m. The Plaza also plays host to a free yoga session every second and fourth Saturday of every month, starting at 11 a.m.

Downtown Santa Ana is also the site of the monthly OC Vegan Fest as well as the always anticipated, holiday Tamalfest, a free event on Dec. 17 featuring family-friend, and delicious, local food as well as entertainment. The Brewers Mash Beer Festival, at the Heritage Museum of Orange County, happens at the end of October.

The city is also home to numerous spots that feel like a special event every time you visit. Perla Mexican Cuisine has quickly gained a reputation for authentic Mexican dishes and a family atmosphere no doubt fed by the fact it is the creation of the mother-daughter team Laura Fabiola Diaz and Ana Laura Padilla who say that want to transport “customers to magic corners of Mexico while maintaining a homemade charm to every dish.”

The 4th Street Market, a 30,000-square-foot food hall for foodies, offers all kinds of journeys of its own, as it features European butchers, Thai noodles, fancy cookies, gourmet coffee as well as “food incubators” that allow ambitious chefs in search of a restaurant to rent space and try out their innovative dishes.

Native Son is a tap house that regularly hosts award-winning breweries from around the globe, while Twisted Tiki, serves classic tiki drinks with their own house-made syrups and fresh juices amid a bustling vibe and colorful environment.

Twisted Tiki is part of the McFadden Public Market, located downtown, that offers a fun twist on the food hall, as it not only offers tropical drinks and a constant rotation of interesting food vendors but is also home to a slew of vintage arcade games with video game-themed drinks at barcode Mission Control.

For visiting families, Santa Ana offers numerous destinations that are both entertaining and educational–though they may want to keep that last bit of information from the kids. The spectacular Lyon Air Museum, located at John Wayne Airport, features famous aircraft from the World War II era, including a Boeing B-17 Flying Fortress, along with other items from the warlike motorcycles and military vehicles. Families can also stop by the new American Ninja Warrior Adventure Park at MainPlace Mall. Inspired by the popular TV show, this one-of-a-kind adventure park experience includes truss obstacles such as Monkey Swings, Spider Walls, Tilting Logs, Floating Bridges and of course the famous Warped Wall.

The 20-acre Santa Ana Zoo, located at Prentice Park, focuses on animals and plants of Central and South America. Given its emphasis on fauna, the zoo maintains a garden-like feel and, fun fact maintains an extensive primate collection from around the world because Joseph Prentice, the wealthy citrus rancher who originally donated the land for the zoo, was fascinated by monkeys and stipulated the zoo always have at least 50 at all times.

Speaking of fun, you can tell the science museum Discovery Cube Orange County is going to be a hoot just as you approach it by car and see the 10-story, black cube that has made it a local landmark. Of course, the fun continues inside where the museum sparks kids, and adults, imaginations and knowledge with more than 100 hands-on exhibits as well as an ever-changing lineup of special events ranging from personal appearances by Thomas the Tank Engine to the mind-bending antics of Spooky Science.

The Bowers Museum is not only one of California’s great art museums, but it regularly hosts such popular artistic and historical events as the Terra Cotta Warrior, mummies from the British Museum, and a look inside the Walt Disney Archives.

Regarding the latter, let’s face it, chances are high that anyone, especially those traveling with family, is going to consider heading to Disneyland, located in Anaheim. That is to say, nearby Anaheim, since Santa Ana’s central location in Orange County–it’s framed by major thoroughfares, including interstates 5 and 405–means those using Santa Ana as their travel base are able to get to points of interest outside the city quickly.

Disneyland is just six miles from Downtown Santa Ana. Knott’s Berry Farm, 12. If you want to check out professional hockey at the Honda Center or major league baseball at Angel Stadium, that’s just five miles away, while the sand of “Surf City,” Huntington Beach, is less than a 15-mile trek.

All of it makes clear that there’s always something going on, something happening, in Santa Ana or near Santa Ana, something guaranteed to be unique and fun, and that’s something that never gets old.

Alpilean Reviews: Is It Worth the Money? Real Customer Results Revealed