Home Sponsored On the Menu at The Bloc 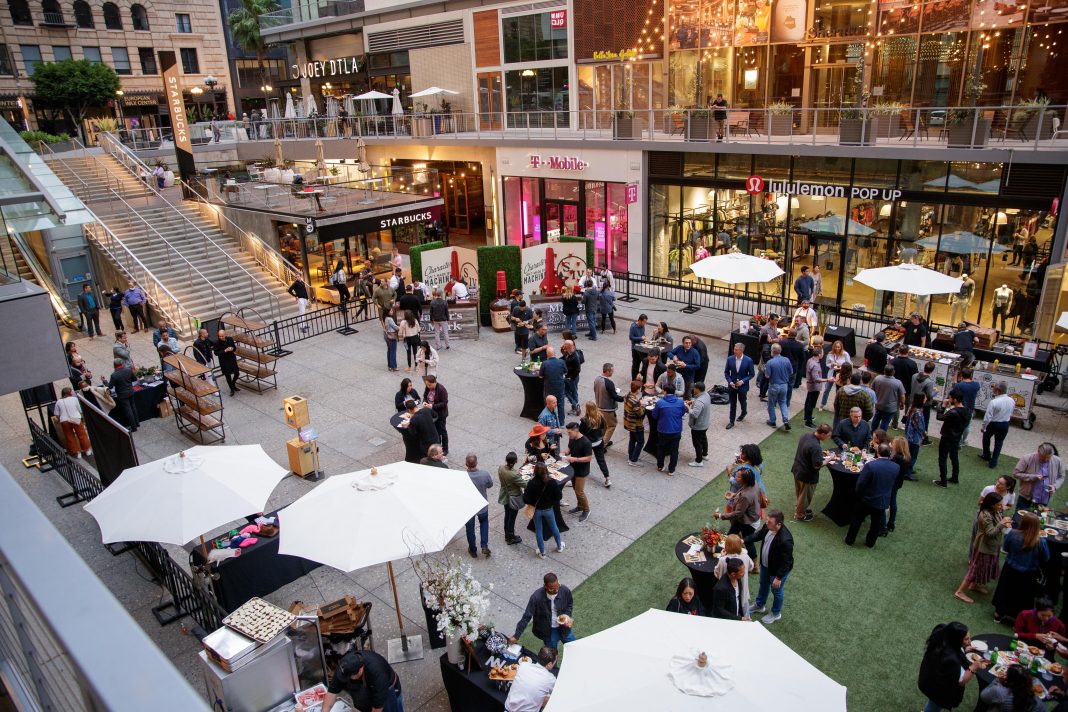 A typical itinerary for a visit to The Bloc: come for the shopping, savor the food. With robust offerings of coffee, cocktails, and cuisine, repeat trips will likely occur. In between all the deliciousness, snap Insta-worthy photos with The Bloc’s murals and street art. Where to start a culinary journey? With stops at these 10 venues.

HATCH has a vision: great food, good times. With Chef Daniel Shemtob, double winner of the Food Network’s “The Great Food Truck Race,” at its helm, this Japanese grill realizes its vision through dishes like yakitori made with locally sourced, organic Jidori chicken. Order some Hamachi and Wasabi Short Ribs, paired with a curated cocktail like the Mezcal-driven Smokin’ Aces to bring SoCal flavors into the mix for an unforgettable feast.

District DTLA brings ingredients from small-scale, local farmer-artisans together with global culinary mastery. Serving breakfast, lunch, happy hour, and dinner, the District goes from casual sandwiches like its Cali Burger to Carving Board selections, such as the Grilled Atlantic Salmon. Not to be missed: distinctive cocktails a la the Morphine with mushroom-infused applejack, punt e mes, cynar orange bitters, and black salt.

JOEY combines ambiance with culinary excellence. Said ambiance comes via DTLA’s largest street-level patio. Added to the mix, a theatre kitchen where a bevy of executive chefs whip up dishes like the Peanut Prawn Curry and Black Truffle Ravioli. For dessert? The Warm Italian donuts, please.

Marugame Udon reassures, “It’s okay to slurp.” Here, authentic udon noodles from Southern Japan’s Kagawa Prefecture are cooked to order as featured in bowls of the Curry Nikutama. Prefer Shrimp Tempura or Chicken Katsu Skewers? As luck would have it, they’re on the menu, too.

Starbucks is the place to go when struck by cravings for their Sous Vide Egg Bites. Kale & Mushroom, Bacon & Gruyere, Egg White & Roasted Pepper… Salivating yet? Oh, and there’s coffee, too. After all, ‘tis the season for Pumpkin Spice Latte.

Yes, there’s coffee to be had here, but… the yogurt! And toppings! Blueberry frozen yogurt (one of eight flavors) topped with pomegranate seeds, Thai Tea Boba, and the mango smoothie are just samplings of the frosty deliciousness that awaits. (Fresh menu items are subject to availability and change). Don’t miss CoffeeWalk YogurtTalk coffee drinks, too, including Chai Lattes and cappuccinos.

Ooo, la la! This Parisienne-inspired café was named after French novelist and playwright Honoré de Balzac. What fueled the prolific writer’s time at his desk? Fifty espressos a day. Scribes and coffee lovers alike can get their caffeine fix at Café Balzac and pick up organic crêpes and assorted viennoiseries while they’re at it.

Another kind of art can be found just next door to Café Balzac at its sister venue, BellaLina Gelato. The maestros behind this creamy goodness slow churn and use more milk versus cream for a texture smoother than that of ice cream. Plus, the 15° Fahrenheit serving temperature amps up the intensity of flavors like Pure Sicilian Pistachio, Menta Chocolate Chip, and Madagascar Vanilla Bean Gelato.

Video Vortex is open seven days a week, but the night to catch karaoke is 8 p.m. every Tuesday. Need to loosen up vocal cords with a beverage? They’ve got cocktails and beer on tap, along with eats.

Menu items were pulled from CoffeeWalk YogurtTalk venues at locations other than DTLA. Should check for accuracy.

The Best Men’s Colognes of All Time

Protetox Reviews: Is It Worth the Money? Negative Complaints Examined!