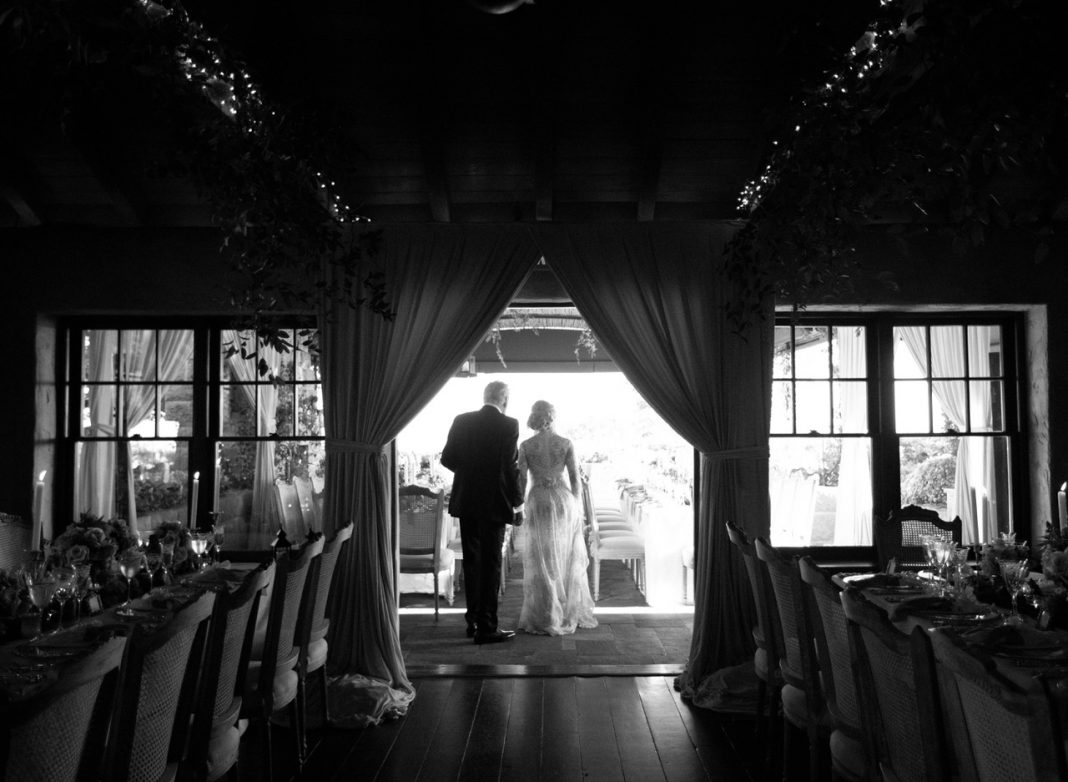 It’s been almost a year since Tina and Jerry Moss gathered friends and family at the luxurious San Ysidro Ranch in Montecito for an intimate wedding. The resort, located in the foothills of the Santa Ynez Mountains, has a long history as a romantic setting; it’s where Vivien Leigh married Sir Laurence Olivier and where John and Jackie Kennedy spent their honeymoon.

Morse and Moss exchanged vows there on August 10, 2019, and as their first anniversary approaches, their wedding day is still making waves. This month, the elegant event is featured in Inside Weddings magazine.

Tina, a former Model and Doctor of Psychology and Jerry, a music industry legend co-founded A&M Records with Herb Alpert and is a champion racehorse owner. The couple have many friends in common and had traveled in the same circles for years without meeting. When they finally crossed paths 5 years ago, it was kismet.

Tina hopes that her story of finding love later in life, will remind single people that romance is out there. She said, “Given that I’m three years away from my 60th birthday, it’s never too late to meet your soulmate.”

One of Tina Morse’s favorite moments from the wedding was arriving in a white vintage Rolls Royce. Among the friends and family gathered for the ceremony was her father, whom she had only recently met for the first time. She recalls, “My newly found father was standing by to walk me down the aisle to my handsome husband.”

The bride and groom were equally excited to tie the knot. Jerry Moss said, “There isn’t anyone that either of us would rather spend time with. She is the love of my life.”

Morse echoed that sentiment, adding, “I adore my husband. We are both so much alike in our temperaments, and what is important to us, and most significant—we love one another in a way that we both have always wanted.”

Wedding guests included longtime friends Joe Walsh, Mo Ostin, Sérgio Mendez, and Robert Wagner, among others. Jerry’s partner, Herb Alpert, served as his best man. Morse and Moss married in a traditional Jewish ceremony that concluded with the groom crushing a glass. The shards were collected by a close friend, who turned them into a unique sculpture for the couple as a wedding gift.

For Moss, the highlights of the day include “seeing Tina walk down the aisle, kissing my bride, and all the love and support from family and friends throughout the weekend.”

The couple divide their time between Bel Air, California, and Maui, Hawaii. These soulmates found a storybook romance, and as they continue to share their story with the world, they look forward to living happily ever after.