Gender inequality is not a new issue. For centuries women have made contributions to every sector, from science and literature, to politics, medicine, and social justice. Yet their voices have been silenced and their accomplishments have largely remained anonymous. This phenomenon carries into the 21st century. In Anonymous Is a Woman, author and historian Nina Ansary takes readers on a 4,000 year historic journey to expose the repercussions of centuries of discrimination against women. 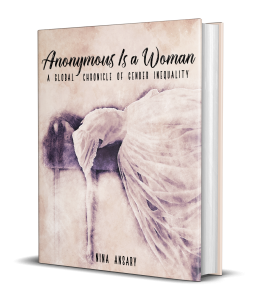 Ever heard of Bibi Khanum Astarabadi, author of the first declaration of women’s rights in modern Iran? What about Wang Zhenyi, Chinese Astronomer, who provided the first mathematical, scientific explanation for solar and lunar eclipses? Or Jeanne Villepreux-Power, French marine biologist, the inventor of the aquarium? Or Kentake Amanerinas, Ethiopian Queen and defender of the Kingdom of Kush against Roman aggression? Surely you know Eunice Newton Foote, the American scientist who discovered the principal cause of global warming? And Tapputi-Belatekallim, considered to be the world’s first chemist? No? How about Lise Meitner, the Austrian physicist who led in the discovery of nuclear fission?

The trailer for Anonymous Is a Woman, makes a compelling and eye-opening statement, not only about the eclipsing of women’s accomplishments in history, but how this debilitating cycle plays into the current gender gap and global statistics that underscore inequality and discriminatory practices against women and girls worldwide.

Watch this powerful clip and join in the global movement for change #AnonymousIs.