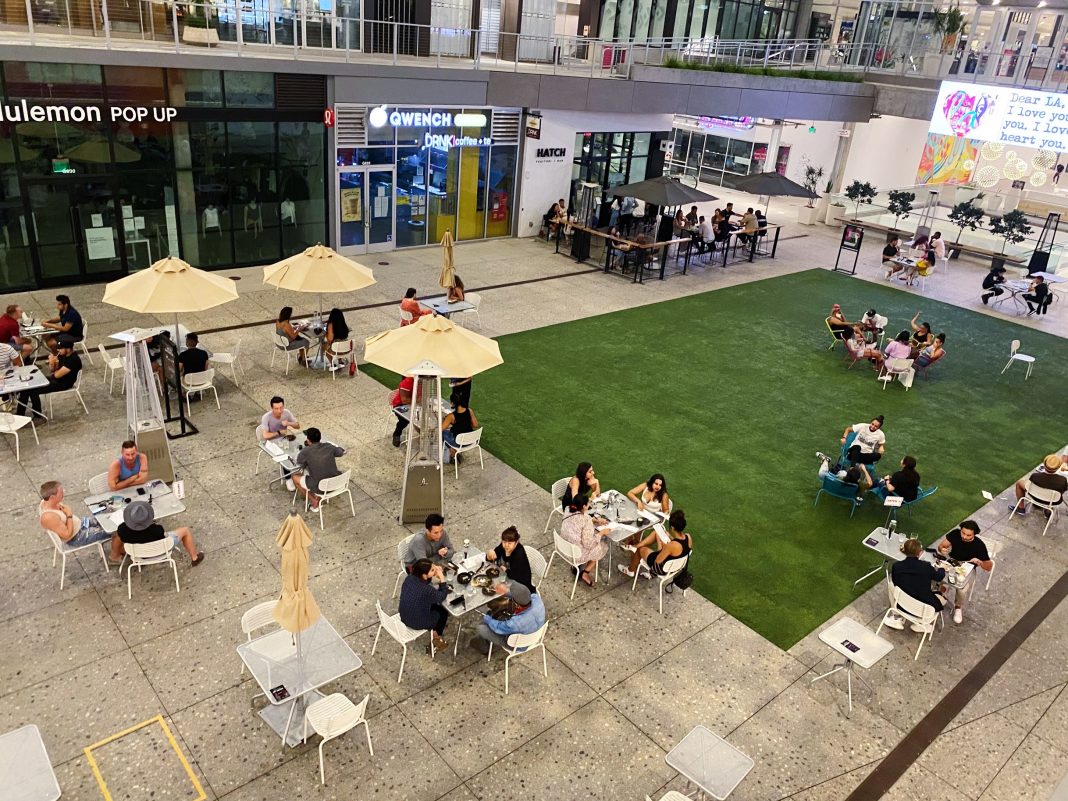 There’s still time to whet your whistle, chill over something frosty and savor the flavors and experiences distinctly found at The Bloc. Here’s what’s waiting just for you.

When should one dine at HATCH Yakitori + Bar? Well, anytime it’s open, of course. For those craving its fried chicken, lunch is the only time to arrive. This modern izakaya style restaurant’s four pillars of yakitori marry Japanese cooking methods and California flavors. Then there’s the famous black HATCH Fried Chicken, which requires careful attention, from the 48-hour brining of organic Jidori chicken to its being fried in Squid ink flour. Pair with a curated cocktail and, well, that’s perfection.

There’s a literal Oasis in DTLA located on the corner of 7th and Hope Streets. It’s here you’ll find JOEY DTLA with its street level patio, the city’s largest. And where better to settle in for sushi and cocktails? Start with the Japanese-style Cerviche with its kick of Serrano chilis. Follow with the Tempura Prawn Sushi Cone and Tuna + Avocado Roll. To drink? Nothing spells summer quite like the Aperol Spritz.

Some of the reasons QWENCH has throngs of loyalists – fresh, nutrient-dense ingredients, a plethora of superfoods and flavor for days. Myriad options are on the menu, like the Category 4 Vintage Blend, Protein Blends such as the Goliath, Green Blends including the Matcha and Epic Blends like the Charger. A great selection for summer temps – a creamy Acai Bowl.

Our pick from the five different flavors: the N Bowl. Hello, Nutella!

Coffee connoisseurs will make a beeline for DRNK Coffee + Teas for their consummate brews. The Earl Grey and Matte Lattes befit hot temps. For a caffeine fix: the Super Coffee, please. Need a bite on the run? Order up a housemade wrap, ciabatta, paninis or bagel.

Paris aspirations may lead to requests of, “Espresso, s’il vous plait.” In the case of French writer Honoré de Balzac, this question was proffered 46 times per day. Paying homage to his need of caffeine, and serving yours, is Café Balzac. French deliciousness doesn’t stop here. Also on tap is gourmet coffee, curated pastries and crepes of sweet and savory varieties. C’est magnifique!

Sometimes you have to heed the siren song of froyo. At times like these, get thee to Coffeewalk Yogurtalk. With flavors befitting various palates, there are options to be had. Then come the toppings, which allow for personalizing one’s frozen creation. Masterpieces do occur. More of a boba fan? Coffeewalk Yogurtalk has you covered, too.

See a Starbucks and the craving for one of their Refreshers may come on. Good idea. Nothing like a Refresher (mmm, Kiwi Starfruit…) to sip whilst strolling around the The Bloc. Be on the lookout for Ruben Rojas’ Live Through Love art installation, on exhibit through October 2. During a moment of repose on the lawn the thought may occur: August 25 marks Starbucks’ pumpkin spice season. Time to set a calendar alert.

Do you feel that pull emanating from inside Alamo Drafthouse? That would be none other than Video Vortex. This dazzling cinematic venture is something that has become extinct as of late – a video store. Video Vortex offers free rentals of 40,000+ DVD’s and Blu-ray’s. Determine which classics to view at Video Vortex’s bar with its 48 beer taps, cocktails and grub just right for savoring over board games.