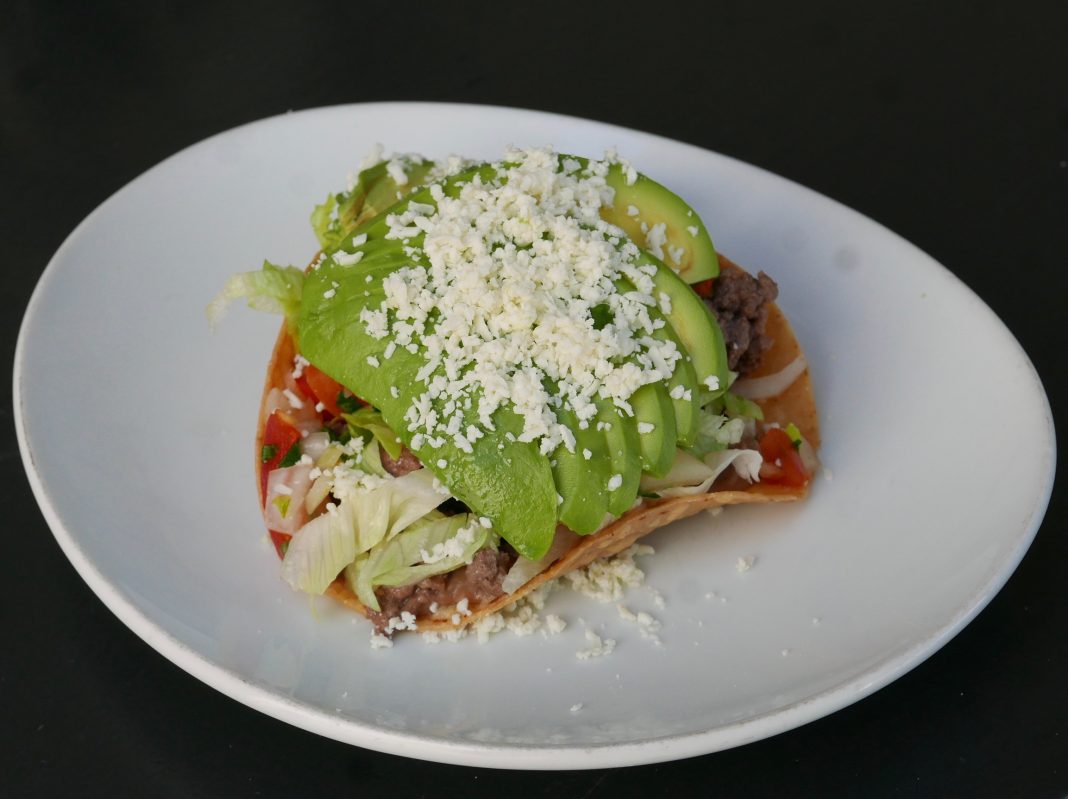 Cinco de Mayo has become synonymous with Mexican feasts, drinking margaritas and partying with friends and family. People may not know that the day commemorates the Mexican army’s surprise victory over France at the Battle of Puebla in 1862. In the past 157 years, honoring General Ignacio Zaragoza’s triumph has actually become more popular in U.S. cities like L.A. with large Mexican-American communities than in many parts of Mexico. In Sherman Oaks, Casa Vega is ground zero for Cinco de Mayo revelry.

Vega Fowler grew up eating tostadas at home, typically featuring pork. “People are more health conscious today,” she says. Thus her choice of Laura’s Lean Beef for these tostadas, an “easy, fun, festive” dish to make and share at home on May 5 (or anytime).

Start construction with crispy corn tostadas that are available at most grocery stores and support the weight of the different toppings. Vega Fowler recommends a base of protein-rich refried beans. “People think they’re so unhealthy,” she says, “but they’re really not.” Instead of adding lard, Casa Vega uses house-made chicken broth seasoned with onions and garlic, which is much healthier and a natural byproduct of cooking birds daily at the restaurant. They mash cooked pinto beans with broth and simply re-heat before serving.

Next comes Laura’s Lean 92% Ground Beef with no added hormones or antibiotics. Garnishes include shredded iceberg lettuce, pico de gallo, sliced Hass avocado, crumbled cotija cheese (which she calls “Mexican Parmesan” due to the savory punch) and a squeeze of fresh lime juice “to brighten it up with a little bit of acid.”

Before serving, Vega Fowler finds one more use for refried beans. “Underneath the shell you can add a little dab of refried beans and then you put your tostada and it will make it stick,” she says. “If you’re serving them, the tostada doesn’t go flying off the plate.”

“The great thing about this recipe is that it can be personalized to whatever their eaters are at home, and whatever their favorite toppings are as well,” Vega Fowler says. “If they want to throw on some minced jalapeños or some chopped cilantro, I would say go for it. That is always the fun thing about Mexican food. It never has to be perfect and can always be tailored to everyone’s liking.”

Vega Fowler suggests building an interactive tostada bar for Cinco de Mayo. “You can have the shells and have your guests make it themselves,” she says. “It gets fun to see the different creations.”

Her four boys all favor different tostada builds. “My oldest will pile it high and add jalapeños and everything on top,” she smiles. “My youngest will just have the beef.”

Her tostadas are hearty enough to be a one-dish meal, possibly with a side of soup. Two tostadas are plenty filling for most people.

Vega Fowler pairs with margaritas, though kids and non-drinkers can opt for refreshing aguas frescas: strawberry, cucumber, or tangy jamaica made with dried hibiscus flowers.

Tostadas are built to eat by-hand, but Vega Fowler won’t begrudge anybody who eats her creation with a fork and knife, joking, “You can eat it however you want it at our Cinco de Mayo party.”

DTLA’s Camphor Wants Patrons to Get Lost in Spice

Too Pretty to Eat: A Photo Tour of Carousel